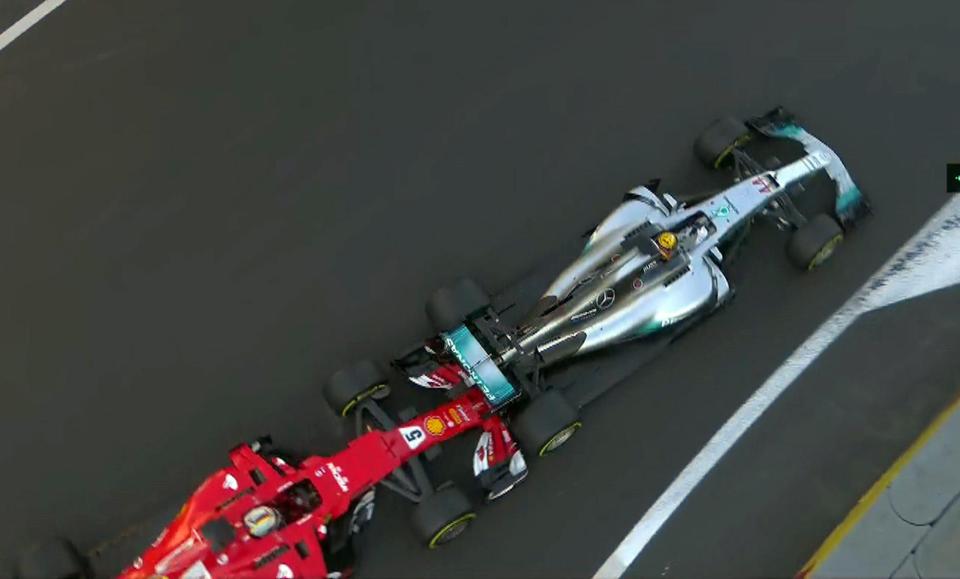 Although the German was penalized during the race and lost further license points, it was speculated FIA president Jean Todt wanted to pursue the matter further.

Amid suggestions a race ban could be applied, it is suggested Todt is unhappy Vettel re-offended despite being sternly warned after Mexico last year about his radio tirade against Charlie Whiting.

The FIA confirmed that on Monday, July 3, it will "further examine the causes of the (Hamilton) incident in order to evaluate whether further action is necessary".

The outcome will then be announced before next weekend's Austrian grand prix, F1's governing body added.

"What makes it even worse is that Vettel took absolutely no blame — although that is always so with him," he said.

"I can understand Lewis' anger and I'm really angry as well. Why couldn't he just say 'It was my mistake, I screwed up'?

Lauda also seemed to agree that the FIA is right to re-open the matter, saying the penalty given by the stewards in Azerbaijan was "a joke".

(GMM) Mercedes has taken the blame for the issue that cost Lewis Hamilton victory in Baku.

Hamilton was forced to pit during the Azerbaijan race when the FIA spotted him physically holding his loose headrest in place at high speed with one hand.

The obvious conclusion was that, during the red flag stoppage, a Mercedes team member did not – in Dr Helmut Marko's words – "attach Hamilton's headrest properly".

But Mercedes chief Toto Wolff said there would be no blame game.

"This team has won three world championships and I will not point the finger at a single person," he said.

In the days since Baku, the Brackley based team has looked into what went wrong.

Team chairman Niki Lauda told Osterreich newspaper: "The pins that attach the headrest did not click into the socket.

"This was worsened by the heavy load caused by the air at high speed. We will do a redesign so that this does not happen again.

"This should have been an easy win for us," Lauda added.

However, Lauda did say he was happy for Red Bull to have won the race instead.

"I'm happy for them," he said. "It gives them the boost they need before the Austrian grand prix."

The tumultuous Baku race last weekend was surprisingly won by Daniel Ricciardo, but the Red Bull driver admitted he lucked into the victory on a track that didn't suit the underpowered Renault engine.

However, team official Marko told Auto Motor und Sport the win was "extremely important" for the team after a "bad start" to 2017.

"The pace is now coming slowly," he said.

"It shows also in qualifying, although we cannot turn up the engine like Mercedes and Ferrari. But the direction is right.

"On the right track, we can already win on our own strength," Marko added.

"We are expecting a lot for Silverstone and Budapest. We have made a real step forward with the chassis and found a second since the start of the season.

"But Renault has also made significant progress," he said. "Two tenths on the straight in Baku does not sound much, but it makes a difference."

And so while Mercedes and Ferrari were once miles ahead of Red Bull in 2017, Marko says that is changing.

"We are already as strong as the second (best) car," said the Austrian. "Hamilton and Vettel are three to four tenths ahead, and with the power turned up it is even more.

"But we are moving in the right direction. We just have to survive our home race now," he added.

Marko is referring to the next round in Austria, where the Red Bull Ring is owned by the energy drink company.

"There is a lot of stop and go, many straights, short corners and uphill acceleration zones," he said. "There are too few places where we can make up for it with our chassis."

And not just that, Max Verstappen is obviously furious with Red Bull and Renault's recent run of reliability problems.

"Clearly we have to improve," Marko admitted, "also because it's happening in all areas."

(GMM) Honda is confident it is finally making progress in formula one.

That is despite intense speculation that the struggling Japanese manufacturer's works partner since 2015, McLaren, is close to instigating a divorce.

However, there are in fact signs that things at Honda are finally improving.

Amid a flurry of component changes and penalties in Baku, the marque tested its long-awaited 'specification 3' engine in Baku.

Said to be worth 30 horse power, it will now make its race debut in Austria next weekend.

"We thought that in Baku, as we are so far behind and with the circuit characteristics, it would be difficult to score points," Honda chief Yusuke Hawegawa told Speed Week.

"So we used specification 2 and saved the new version for Fernando (Alonso) for Austria," he added.

As for the suggestions of a 30hp boost, Hasegawa answered: "It is in the right direction, although not enough to reach the level of the other engine manufacturers.

"But things are getting better at Honda. We will be stronger in 2018."

(GMM) Romain Grosjean is not ruling out a change of scene for 2018.

The Frenchman left Baku without even speaking with the media, after his 18-month struggle with his brakes at the new American team Haas culminated in a nightmare weekend.

Grosjean, 31, switched from Lotus to Haas last year amid speculation he was deliberately moving closer to Ferrari, the American outfit's technology partner.

So with Ferrari yet to sign either of its current drivers for 2018, it might be said that Grosjean is close to the front of the queue at Maranello.

"Life is full of surprises. I think if you ask Valtteri (Bottas) what he was doing (in 2017) in December he would have said Williams and, next thing you know, he's in a world champion's car.

"So it's a phone call (away) and the best we can do is the best job on track," Grosjean added.

Grosjean's Baku media snub aside, it is often the Frenchman's frustrated voice on the radio that is heard by the millions watching the grands prix.

"I'm frustrated sometimes," he admits, "because I love winning and that's all that matters to me in formula one.

"Obviously you come from other categories where you've won everything and then you come to F1 and don't get the chance. It's like you're starting the race ten seconds behind the others."

However, Grosjean said helping to get the Haas project off the ground has been "great", but he clearly has an eye on the driver market for 2018.

"Who knows what the grid is going to look like next year. Valtteri is waiting on Mercedes, then there's Kimi (Raikkonen) — what's he going to do?

"Everyone since 2010 has said he's going to be out of formula one and yet here we are and he's 37 and still here doing a decent job. So I don't know.

"If there is an opportunity, if there is a seat, I believe I'm in a good position," said Grosjean.

Celis Jr. to get FP1 runs in Austria, Hungary

Force India reserve driver Alfonso Celis Jr. will make further practice outings with the team at the Austrian and Hungarian Grands Prix, it has been announced.

Celis Jr. linked up with Force India in late 2015 and went on to make six practice appearances through the 2016 season, alongside test session runs.

Having sampled the VJM10 during pre-season running in Barcelona and at the post-Bahrain Grand Prix test, he will return to the cockpit for FP1 in Austria and Hungary.

Sergio Perez will step aside in Spielberg, and Esteban Ocon in Budapest.

Celis Jr. competes in the World Series Formula V8 3.5 championship; he holds third in the standings, with one victory and four further podiums from 10 races.