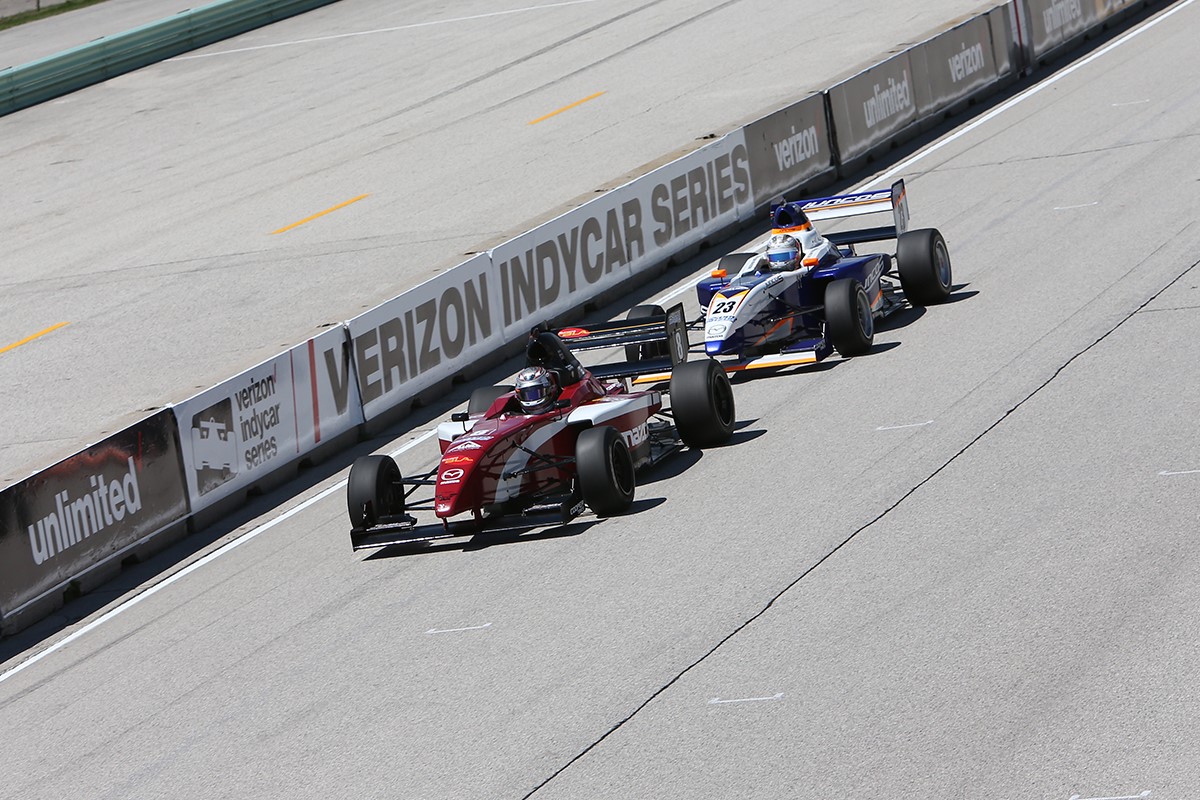 The tense battle between Australian Anthony Martin (Cape Motorsports) and Brazilian Victor Franzoni (Juncos Racing) for this season’s Pro Mazda Championship Presented by Cooper Tires continued today at Road America. Martin bounced back from a crushing defeat yesterday to barely hold off a charging Franzoni this afternoon, crossing the line scant 0.1799 seconds clear to secure his third win of the season.

Los Angeles-based Russian Nikita Lastochkin posted his most accomplished race of the season by overtaking the identical Team Pelfrey car of Brazilian Carlos Cunha for third on the final lap.

Franzoni, who yesterday had extended his points lead to 14 following a comfortable victory from pole position, made his job today rather more difficult when an ill-timed red flag flew in qualifying mere moments before he was able to set a representative lap time. So, instead of claiming another pole, Franzoni was obliged to start from the back of the grid.

Martin, who instead started from pole, duly translated that advantage into the lead, although he was unable to shake off the third Team Pelfrey car of Californian TJ Fischer, who remained glued to his tail for the opening five laps. Franzoni, meanwhile, was scything through the order.

Franzoni was up into third place inside just four laps, although at that stage his deficit to the two leaders was already over six seconds, so he faced a difficult challenge with time ticking away in the 30-minute race. It seemed as though he was in luck when National Class contender Brendan Puderbach (FatBoy Racing!) slid off the road in Turn 14 to ensure a full-course caution. The previous advantage enjoyed by Martin and Fischer was erased at a stroke.

Franzoni quickly sliced past Fischer at the restart, whereupon the Californian’s strong performance was cruelly ended by a mechanical problem which forced him out of the race.

Franzoni immediately put the pressure on Martin, but the Aussie was determined not to make it easy. He was granted a couple of reprieves by two more brief full-course cautions, after which there remained enough time for one more lap of green-flag racing once the yellows had been withdrawn. Again, Martin stuck to his guns, kept all the doors firmly closed, and held on to win by the narrowest of margins. Franzoni had to be content with second place and the Quarter Master Hard Charger Award.

Cunha looked set for third place after sneaking past teammate Lastochkin at one of the restarts, only for the Russian to fight back with a classic “over-under" pass at Canada Corner on the final lap to secure his first podium finish.

Jeff Green, from Peoria, Ill., claimed the Staubli Award following his career-best fifth-place finish for Juncos Racing, which also secured the PFC Award. That result was enough for Juncos to move into a tie with Team Pelfrey in the coveted Team Championship.

Franzoni’s lead in the drivers’ championship has been trimmed to seven points, 174-167, as the series heads next to Mid-Ohio Sports Car Course for a triple-header event on July 29-30.

Anthony Martin (#8 Mazda/Burgess BLA-Cape Motorsports): “Gaining points is the biggest thing. I got a really good start and I kept that gap for a good while until the safety car came out and bunched everyone up. And at that point, I saw the standard white and purple car in third place and thought ‘OK, he’s definitely got pace.’ I just had to put my head down and my bum up and really focus on the road ahead of me and not behind me. It’s hard, because you have that car in your mirrors but you can’t let it affect you. That worked out a lot better today than yesterday. We will go back and work on a few things to find some speed and be ready for Mid-Ohio."

Victor Franzoni (#23 Juncos Racing): “It is two-sided, looking at this race: on the one hand, I’m sad not to win, but other people would say it’s good that I came back to finish second. But we lost points today, even though I came from last to second. I had to be really smart and really aggressive. I couldn’t lose time but I couldn’t crash. I had to pick my spaces, especially with guys who were battling with each other. It was fun. I was happy to see the first yellow but, later on, the flags were not my friends. I knew I had to do something on the last lap, but it didn’t work. I’m not happy now, but I know we’ll have a good car at Mid-Ohio."