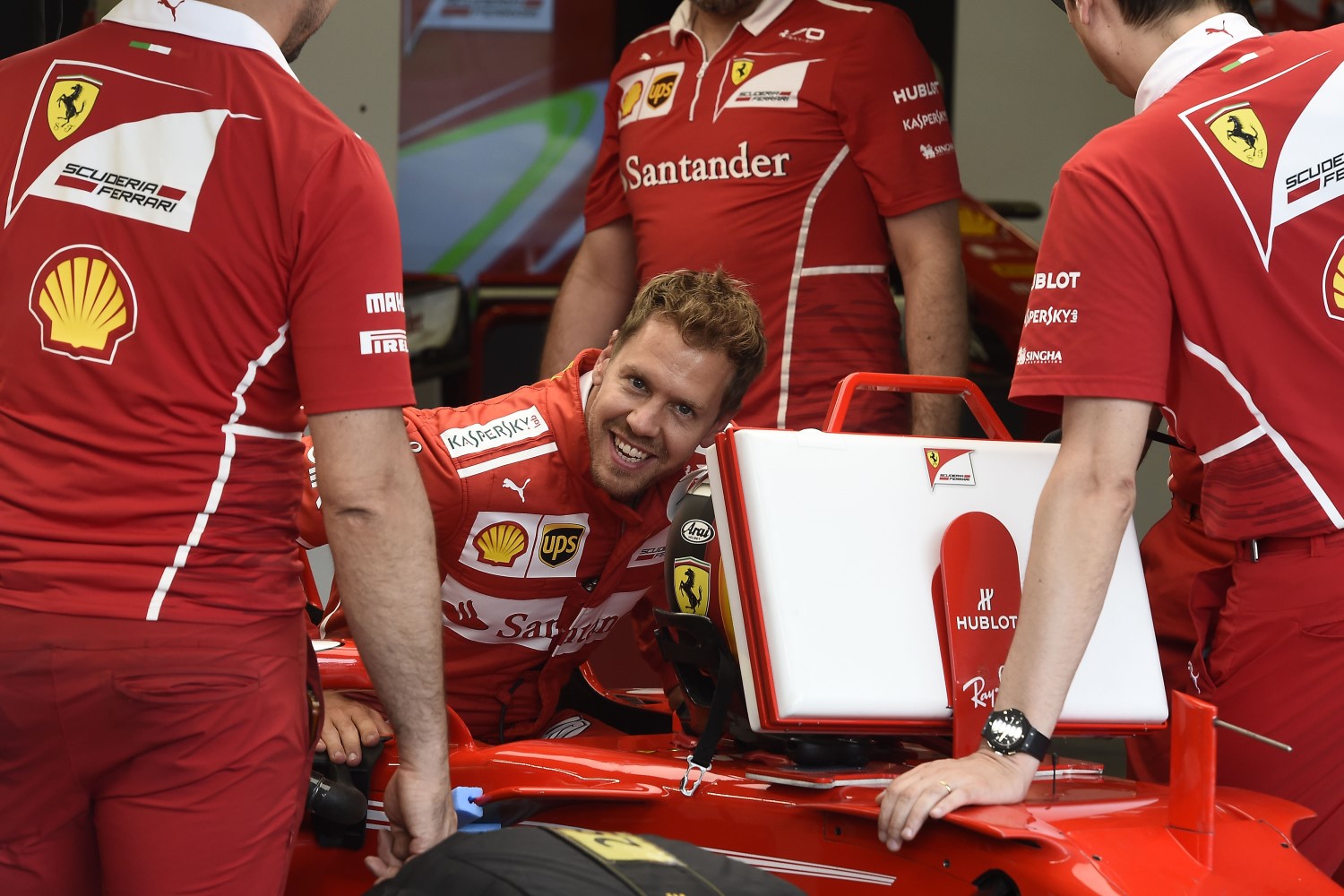 Wolff plays down Ferrari oil 'trick' rumors
(GMM) Toto Wolff has played down suggestions the FIA might have taken away Ferrari's secret weapon in 2017.

As the teams arrived in Baku, a rumor did the rounds that Mercedes had asked the FIA to clarify the rules about adding oil to fuel.

The rumor was that Ferrari had been taking advantage of the 'trick' via an extra oil tank, for a performance gain.

So as the Italian team suddenly dropped a full second behind Mercedes in Azerbaijan qualifying, some insiders quickly connected the dots.

"I don't know why the gap is what it is," Mercedes team boss Wolff said.

When asked specifically about the FIA's clampdown, he added: "I don't know who is doing what, but I think the FIA's further clarification makes the conditions for that more stringent.

"But I don't think this had any particular effect here."

Another suggestion is that Ferrari's alleged oil-in-fuel trick has its biggest effect in qualifying.

Sebastian Vettel said: "Our long runs on Friday were strong, so I have no particular worries about our pace.

"I think ourselves, Mercedes and Ferrari are very close," he added.

The German qualified fourth at Baku, behind his Ferrari teammate Kimi Raikkonen.

It has raised the specter of a 'team order' to swap that position and give Vettel a clear run at the two Mercedes, but Vettel insisted: "I do not expect help from Kimi.

"Overtaking at this track is possible, so we'll see how things go."

(GMM) Speculation is mounting that Sebastian Vettel is on the cusp of extending his contract at Ferrari.

While earlier the championship leader was quiet about his expiring deal, he is now being quoted as being more open about his comfort at the Italian team.

"I have nothing to complain about," he told La Gazzetta dello Sport.

"Usually Germans always complain, even when they're on holiday in Italy and the food and atmosphere are fantastic. But in this sense, I am not very German.

"I am happy with Ferrari," Vettel added.

As for a new deal, the quadruple world champion said: "There is nothing that speaks against it. I think there will be no surprises but there is also no rush."

But when asked what the holdup is, Vettel answered: "It's not that we are waiting, I think the daily business is simply more important at the moment."

The German broadcaster RTL said September's Italian grand prix at Monza could be the scene of an official announcement.

Vettel also told Bild am Sonntag newspaper: "It is nice if the president is behind me, but it's not something we have to do now in the next few days.

"This also affects our team boss Maurizio Arrivabene and myself as well, and at the moment we have our hands full and it's not the first thing on the list."

Vettel not injured – spokeswoman
(GMM) Sebastian Vettel's spokeswoman has played down rumors about an injury for the world championship leader.

At Baku, some have noticed that the Ferrari driver's leg was bandaged.

"What people have seen was normal Kinesio taping. It is what Sebastian sometimes has, like many athletes," she explained.

Kinesio taping is commonly used by physiotherapists to support muscles and joints during healing.

(GMM) Toto Wolff has hit out at F1 media personality Eddie Jordan for perpetuating a rumor about Mercedes' future in the sport.

The German team recently rejected former team boss Jordan's claim that Mercedes will pull out of formula one after next year.

But now, Jordan has doubled down in Baku, saying not only that Mercedes is finding a buyer to take over the team's contractual obligations through 2020, but that sponsors UBS and Petronas will leave at the end of the season.

Jordan, 69, often makes wild predictions about the future in F1, but Mercedes chief Wolff said in Baku that he is no longer laughing.

"I'm ready for any banter with Eddie," he said, "but I stop laughing when it comes to 1500 employees who are worried about their future.

"I told him that this is very serious for me," Wolff added. "We are not leaving F1, none of our sponsors are leaving F1, and we are very happy where we are.

"He should stop reporting these rumors, this fake news."

Pirelli could introduce even softer tire for 2018

(GMM) Grumblings about Pirelli have returned to the F1 paddock.

Not too long ago, the complaint about the official F1 supplier was that its tires degraded too quickly.

But now, although grip has increased and drivers are able to push hard through a stint, the grumble is that the tires being offered by Pirelli are too hard.

Referring to the recent Montreal race, Haas team boss Gunther Steiner said of the so-called 'super soft' compound: "We could have done three races with this tire."

Renault's Nico Hulkenberg agreed: "If you look at the tires after 30 laps, they're like new."

Part of the problem is the high tire pressures demanded by Pirelli, but the Italian marque is reluctant to reduce them further, particularly with ever harsher curbs.

Germany's Auto Motor und Sport reports that one solution is that a new soft tire – softer than the 'super' and 'ultra'-soft – could be introduced, but that would not arrive until 2018.

The report said the new soft tire could be called 'mega-soft'.

Championship leader Sebastian Vettel accepts there are "no excuses" over his worst qualifying result of the campaign, though believes Mercedes was out of reach at the Azerbaijan Grand Prix.

Vettel lost substantial track time during the final practice session on Saturday, with Ferrari forced to revert to an older engine after a hydraulics leak was detected.

Vettel's car was readied in time for qualifying and he placed third in Q2, but slipped behind Ferrari team-mate Kimi RÃ¤ikkÃ¶nen during the final segment and ultimately clocked the fourth best time.

It is the first time this season that Vettel has qualified outside of the top three.

"I think the result is OK, but I'm not entirely happy, obviously," said Vettel.

"This morning didn't help, but it's not an excuse, we are doing enough laps.

"In the end I was alone [on track], and had no tow in the last sector, but I'm not a big fan of excuses, I could have done a bit better.

"Probably P3 was the maximum."

Raikkonen, who qualified over a second adrift of Mercedes' Lewis Hamilton, pointed to tire warm-up as the primary issue around the streets of Baku.

"It's really difficult with the tires to switch them on," he said.

"With the last set had a better feeling, just on the warm-up side, but it was still not perfect, if you switch them on you can go a lot faster."

Hamilton: Ferrari will 'be there' in race

The gap represented the biggest advantage Hamilton has held during qualifying in 2017, but the Briton is wary that Ferrari is set to pose a threat in race trim, as he bids to close the gap to title leader Sebastian Vettel.

"I think the Ferraris are going to be there," Hamilton said on his expectations for the race.

"The strategy will definitely come into play but it's not easy.

"Considering how long that main straight it, it's not actually the easiest place to overtake, as you saw in the last race here.

"So, I think it's still going to be a close race and we've put ourselves in the best position as a team and hopefully we can utilize that."

Ferrari struggled more than Mercedes in terms of getting the tires in the correct window, but Hamilton expects the issue to be less pronounced in the race.

"The tire temperatures is a real big issue [for Ferrari] – which is unusual because that's something they don't usually struggle with," Hamilton commented.

"So that's an interesting factor that we have to take into account, [but] I think in the race it's a lot different when the car is heavy."

Fernando Alonso believes McLaren-Honda's speed deficit is so pronounced that his rivals think he is on a slow lap when he is actually on a quick effort.

McLaren-Honda has struggled for straight-line speed during another troubled campaign, hindered by a lack of performance and reliability, with Alonso taking a 40-place grid penalty in Azerbaijan.

Alonso got caught up with Daniel Ricciardo during Q1 at the Baku City Circuit, the Australian moving ahead as Alonso began a hot lap in his MCL32.

Alonso re-passed Ricciardo through Turn 2, delaying both, before he set a time quick enough for only 16th overall, effectively meaningless due to his substantial grid penalty.

"At the start of the lap, they probably get confused, because our speed is that slow that they think we are probably going to the pit lane, and that we are in a slow lap," Alonso said.

"But no, this is our speed, we start a timed lap, this is the way it is, so I think they get surprised a little bit.

"They overtake me in the first corner, I overtake them in the second corner, we both lose the laps yesterday and today, but it didn't have any impact, as it was in the beginning of the session when the tires are cold.

"We [him and Ricciardo] both set fastest laps at the end of the run, so that was OK.

"But I'm sorry if they get confused because of our speed, but it's the way it is."

Alonso is poised to line up from 20th on the grid, behind team-mate Stoffel Vandoorne, who has an additional 35-place drop due to new power unit elements and a fresh gearbox.