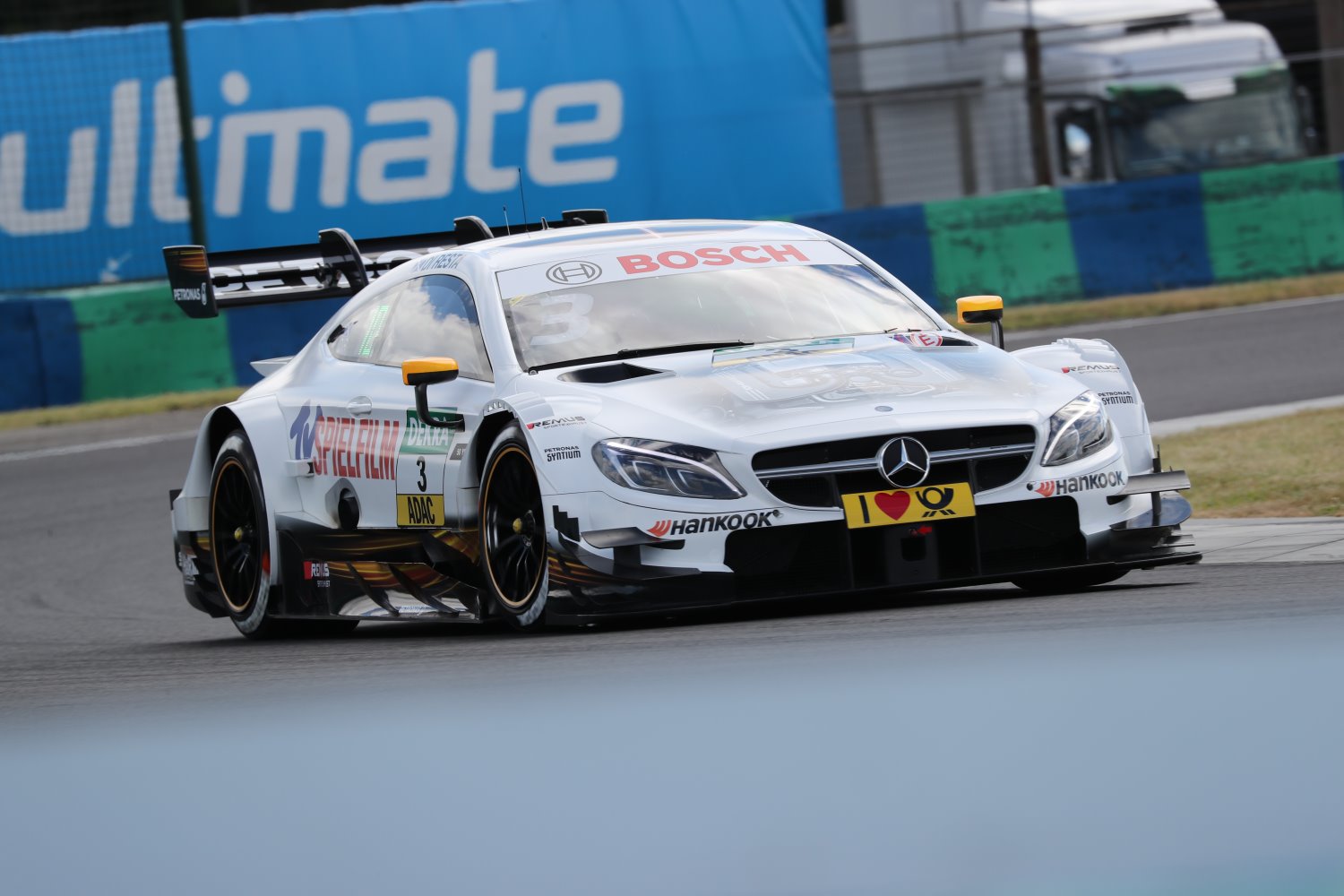 Nobody had expected that after qualifying: after an undisputed dominance by Audi in the practice session, Paul Di Resta (Mercedes-AMG), Timo Glock and Bruno Spengler (both BMW) were the drivers who celebrated on the winners’ podium after the first race at the Hungaroring. All three of them benefited from their pit stop strategy that was based on an early tyre change, as well as a safety car intervention. Mike Rockenfeller was the best-placed Audi driver. He made maximum use of his dominant race speed, made up more than 20 seconds, but eventually turned out to be unable to find a way past Spengler and took the checkered flag in fourth place.

“I managed my tyres very well and thus I was able to drive many laps in one stint," race winner Di Resta commented after the race. “We had to opt for a very aggressive strategy, because Audi was very, very fast. I was able to control Timo Glock, he simply wasn’t close enough." For Di Resta, it was his eighth race win in the DTM, the Mercedes-AMG driver’s most recent win to date being his victory in the 2016 season opener at Hockenheim. The Scot dedicated his win to his wife Laura and their daughter Perla who was born last Monday.

Timo Glock was happy with second place: “We didn’t expect this at all," he said. “Fortunately, we had made our pit stop before the safety car intervention, that was worth a lot. Had it not been for this situation, we wouldn’t have won anything today, let alone these 18 points. Initially, I was faster than Paul, but I deliberately held back to save my tyres." The Hungaroring seems to suit Glock: in 2008, he scored his maiden Formula 1 podium finish here by finishing second.

For Spengler, the key to success was a second pit stop at the right time, just at the start of the safety car intervention. “Following my tyre change after the first lap, I had to make another stop, otherwise, I certainly would have had problems with the tyres towards the end," the 2012 DTM champion from Canada commented. In the last two laps, he successfully defended his position against Rockenfeller’s attacks. “Mike was fast, the fastest driver in the field today. Had the race been longer, I would hardly have been able to keep him at bay."

René Rast, who had scored his maiden DTM pole position with the Audi RS 5 DTM in qualifying, had to make do with sixth place behind his fellow Audi drivers Mike Rockenfeller and Mattias EkstrÃ¶m.

The reason for the safety car intervention was the retirement of BMW driver Maxime Martin, who came to a halt after eight laps and parked his BMW M4 DTM on the track. To allow for the car to be recovered, race control sent the safety car out.

Points’ leader Lucas Auer (Mercedes-AMG) didn’t score any points in the Saturday race at the Hungaroring, but still retained his championship lead. His margin from his two fiercest rivals Green and Rockenfeller has been reduced to eight and 16 points respectively