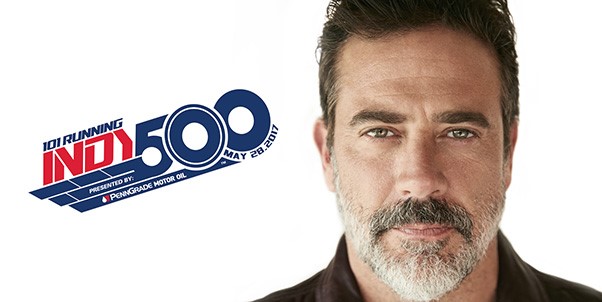 Actor Jeffrey Dean Morgan, who has played major roles in hit television series such as "The Walking Dead" and "Grey's Anatomy," will drive the 2017 Chevrolet Corvette Grand Sport Pace Car to lead the starting field of the 101st Indianapolis 500 presented by PennGrade Motor Oil to the green flag Sunday, May 28.

Morgan plays "Negan" in the smash hit AMC series "The Walking Dead," which returns for its eighth season this fall. He received a Critics' Choice Television Award for Best Guest Performer in a Drama Series and an MTV Movie & TV Award for Best Villain in 2017 for the role.

"We're honored to welcome Jeffrey Dean Morgan to IMS to drive the 2017 Corvette Grand Sport Pace Car," IMS President J. Douglas Boles said. "He's used to playing the ultimate villain in 'The Walking Dead,' but he'll be an envied hero to millions of race fans around the world when he gets to lead the field to the green flag of the 101st Indianapolis 500 in such a beautiful Corvette."

Morgan also endeared himself to audiences with his recurring role as "Denny Duquette" on ABC's smash hit series "Grey's Anatomy" and as "Jason Crouse" in the CBS series "The Good Wife." He also had a notable, recurring television role in the CW drama series "Supernatural."

Since his motion-picture debut in "Uncaged" in 1991, Morgan has appeared in more than 25 feature films. He starred in "Watchmen," director Zack Snyder's adaptation of the iconic graphic novel. Other feature credits include "Desierto," "Batman v. Superman," "The Resident," "All Good Things," "The Losers," "Taking Woodstock," "Shanghai," "Texas Killing Fields" and "The Accidental Husband."

This will be the 14th time a Corvette has served as the official Pace Car, starting in 1978. No other vehicle has served as the Pace Car more than the Corvette. This is the 28th time a Chevrolet has led the field, dating back to 1948, when a 1948 Fleetmaster Six convertible paced the race.

Visit IMS.com to purchase tickets for the 101st Indianapolis 500 Presented by PennGrade Motor Oil on Sunday, May 28 and for more information on the complete Month or May schedule at IMS.

The race also will be televised live on ABC, with the pre-race show starting at 11 a.m. (ET). Advance Auto Parts IndyCar Radio will provide live coverage of the race to its affiliates and on Sirius 212, XM 209 and SXM 970.