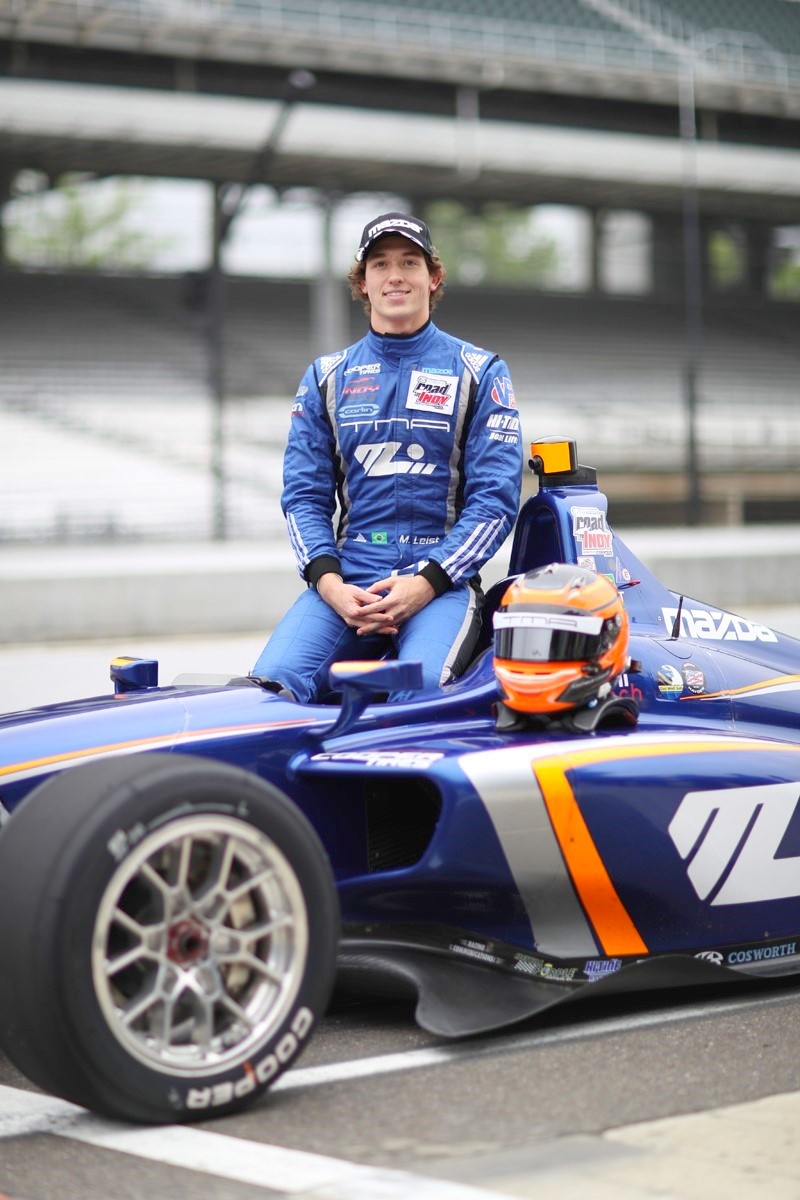 Rookie Matheus Leist will start from the pole position for tomorrow’s Freedom 100, Indy Lights Presented by Cooper Tires Round Seven, after posting two record-breaking laps around the Indianapolis Motor Speedway this evening. The 18-year-old from Novo Hamburgo, Brazil, set new standards for both the two-lap qualifying average (199.198 mph) and the fastest Indy Lights single-car lap set during qualifying (199.268 mph) for the Carlin team following a lengthy delay due to rain.

The 40-lap, 100-mile race is traditionally the highlight of the season for the highest rung on the Mazda Road to Indy Presented by Cooper Tires open-wheel development ladder, and will take place directly after the final practice session on Carb Day for Sunday’s 101st Indianapolis 500.

Seven and a half hours after practice was initially postponed due to persistent rain, the Indy Lights contenders finally ventured out for an abbreviated 20-minute practice session at 4:30 p.m. Conditions remained cool and with heavy cloud cover, but they clearly worked in favor of the Carlin team which posted the top two speeds. Leist set the tone by recording the first-ever 200+ mph lap for an Indy Lights car at 44.7690 seconds, an average speed of 201.032 mph, with teammate Zachary Claman DeMelo not far behind at 199.515 mph.

Twenty minutes later, Neil Alberico (Carlin) was the first car out on track for single-car qualifying. The Californian’s solid two-lap average of 196.938 mph was beaten just a couple of minutes later by Kellett, whose first lap of 198.170 mph immediately eclipsed the existing single-lap record of 197.866 mph, set in 2015 by Ethan Ringel. Kellett’s second lap enabled him to establish a new two-lap mark of 198.011 mph.

Leist, running seventh in the order, then vaulted to the top of the charts with his record-breaking run, which remained good enough for the reigning British Formula 3 champion to secure his first Indy Lights pole.

Herta, running 12th in line, was the only challenger to come close – despite a heart-stopping half-spin as he left the pit lane to begin his two-lap run. Herta recovered but ultimately fell shy of Leist by less than a quarter of a second.

Championship leader Kyle Kaiser, from Santa Clara, Calif., will start from 11th on the grid after recording a two-lap average of 196.058 mph for Juncos Racing.

Matheus Leist (#26 TMA-Carlin): “It was a long wait today and I think all the drivers were nervous going into qualifying. I’m so happy to get my first pole position in the series in my first oval race. Everything is new for me here so I’m still getting used to everything. And the weather today was so different than it was in the test on Monday, but the team gave me a really good car. You have to be 100 percent focused on what you’re doing because everything happens so fast. There was a lot of pressure but I knew we had two very good laps. I had to wait for the other drivers to finish qualifying, which was scary. This feels great."

Colton Herta (#98 Deltro Energy Mazda/Andretti-Steinbrenner Racing): “I’m super glad we got to run, since I am starting ahead of the guys I’m fighting in the championship. But I made a mistake coming out onto the track – I did a half spin and went through the grass. The driver excuse in me would say it was the rain that started to come down but in reality I simply lost it coming out on track. I don’t know how much that really affected us; the Carlin guys had such a good car today. Tomorrow will be a cat-and-mouse game. You have to see what you’ve got and what everyone else’s strengths are. But it really hit me when we were taking the photo that I’m in the front row at Indianapolis. I was thinking that it will be fun to see where I am in 30 years and look back and see where it started."