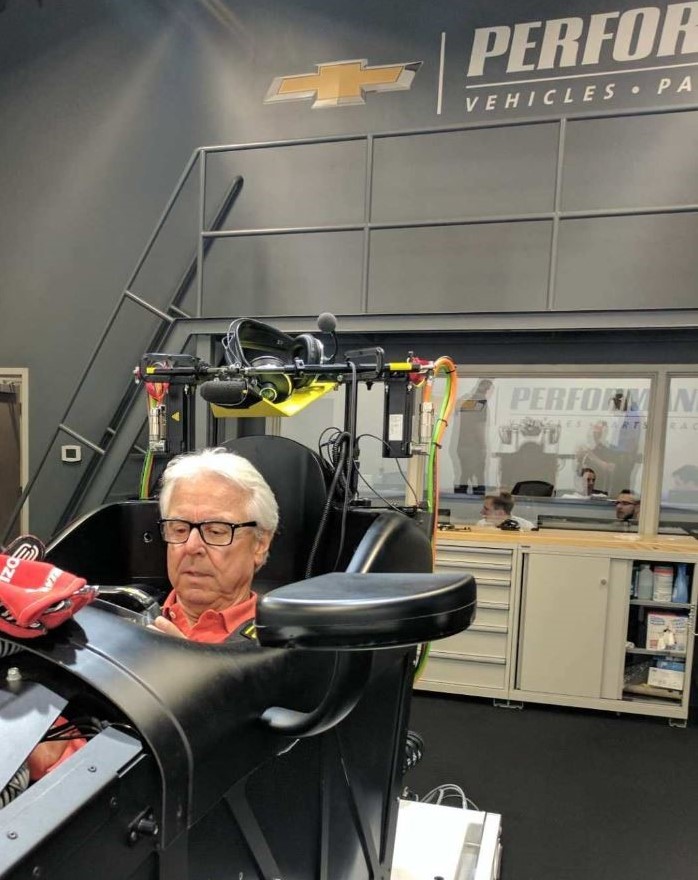 In every form of motorsports, the level of competition for wins and championships is at an all-time high. Teams and drivers have to maximize every tool available to optimize performance.

Q & A WITH FOUR-TIME INDIANAPOLIS 500 WINNER RICK MEARS ABOUT HIS EXPERIENCE USING THE CHEVROLET RACING DRIVER IN THE LOOP SIMULATOR:

RICK MEARS: It was different because I hadn’t been in anything since my last race in ’92. It was more me getting dialed in to it more than it getting dialed in. It was like if I got out of a Penske car and got into a March, I had to learn the feel of that car, learn what that car says to me, so I had to figure out what it wants. That was the feeling I got when I got in it, but that was more due to me than the sim. It brought back a lot of memories real quick.

Q: DID YOU KNOW ABOUT THE EXISTENCE OF THE SIMULATOR BEFORE THEY ASKED YOU TO TRY IT?

RICK MEARS: Yes, I knew a bunch of guys had been using it. (Team Penske technical director) Ron Ruzewski had mentioned it to me some time ago and said, ‘You ought to come down and try it.’ He said it actually would be good to have different feedback and input because they are tuning it all the time. I happened to be in town a few weeks ago and said, ‘All right, let’s try it.’

Q: IT’S A USEFUL TOOL. HOW CAN YOU USE IT IN SPEAKING WITH YOUR DRIVERS?

RICK MEARS: It kind of helps me get back up to speed actually, because it’s been such a long time since I’ve run anything. Like anything, the longer you’re out of something the more out of touch you are with it. To get into something so realistic refreshes my memory of how things feel, how they work. I had not driven (a race car) with paddle shifters or a hand clutch, so it was a big learning curve for me, too. The line I could pick out right away, especially around the Indianapolis Motor Speedway oval. But with the paddle shifters and the hand clutch, getting in and out of the pits is a whole different deal, especially on the road course. It gives me a little bit more of an idea what the drivers are doing out there today versus what we used to do. It’s also a good opportunity for the driver and his engineer to learn each other and work with each other because they can change the spring, they can change the aero just like they can at the track but quicker and get the feedback to each other. That is a big plus. As far as drivers going to a new track and getting the lay of the land, learning the track and shutoff points, I think it is very useful.

Q: DID IT SURPRISE YOU WITH HOW REALISTIC IT IS?

RICK MEARS: It really did, and I think they’re only scratching the surface with all the data they can collect. There is more to come down the road as electronics continue to advance. I really enjoyed it.

Q: DID IT MAKE YOU WANT TO GET BACK IN A RACE CAR?

RICK MEARS: It did, but … One of the great things about it is it gives you a pretty good jolt if you mess up, but it’s not going to hurt you. In that respect, you can try things that you wouldn’t try on the racetrack. You can speed up the process of finding the limit, take bigger risks, bigger bites. The visual part of it, the detail is just incredible.

Q: YOU WOULD SUGGEST HAVING THE RACE ENGINEER PRESENT WITH THE DRIVER?

RICK MEARS: It depends on what they are trying to accomplish. At the particular time I was there, Juan (Pablo Montoya) and his engineer (Raul Prados) are new to each other, and Juan even said it was a great opportunity to work with him. If you have a new combination, it’s a great thing to utilize.

Q: WOULD IT BE BENEFICIAL TO HAVE A NEW DRIVER, SUCH AS JOSEF NEWGARDEN, SEE WHAT HELIO CASTRONEVES OR SIMON PAGENAUD RAN ON A PARTICULAR TRACK?

RICK MEARS: Sure it is. It’s an opportunity to try something that on the racetrack would take more time and money to do. I’m sure they’ve done that, too. About 10 or 15 minutes of me running, someone can on the radio and said, ‘Well, I see where Helio gets his line.’ I just started running what came natural to me. Realistically, I would need another two or three hours in it to get to where I would want to be on a lap time. I could speed up the process because I wouldn’t have the risk. It was a lot of fun. It got the heart started.