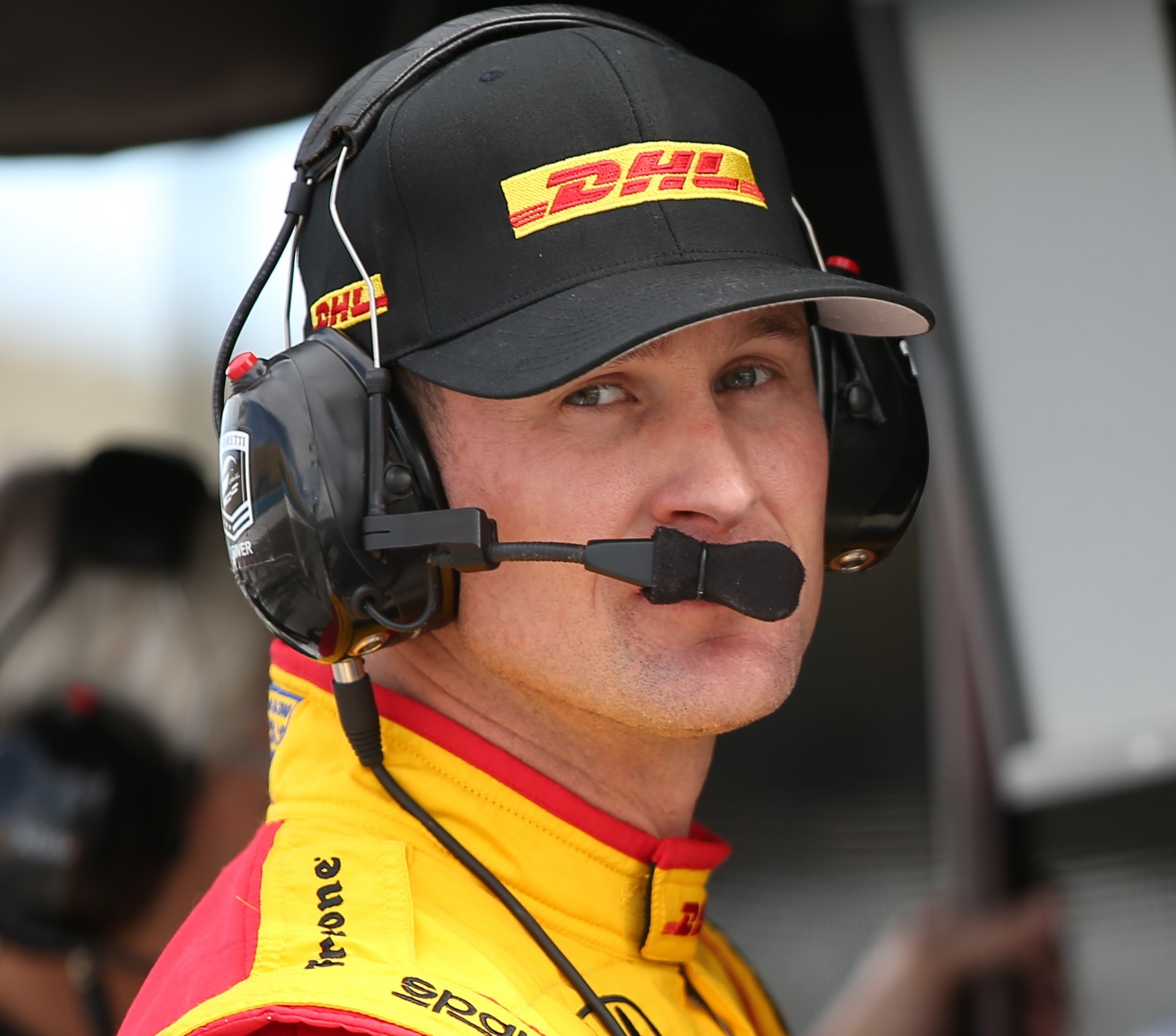 UPDATE Gentilozzi had to put up more than $6M in real estate equity to guarantee payment, plus agreed to sell real estate and Hunter-Reay would get 75% of the net proceeds.

05/19/17 Paul Gentilozzi fired one of the best race car drivers in the world.

Ryan Hunter-Reay would go on to win the Indianapolis 500 and many other races.

But not before he sued Gentilozzi writes Christopher Haxel of the Lansing State Journal.

So Hunter-Reay sued again. He won again and began to take Gentilozzi's property.

For years, Gentilozzi’s dual-track career as a part-time race car driver and part-time real estate broker dovetailed. He owned a world-class racing team and a massive real estate portfolio in and around Lansing built up with the help of his late father.

With a shaved head and slick goatee that has gone from black to gray, Gentilozzi jetted around the world, socializing with Las Vegas big shots and former Playboy models.

Between the Hunter-Reay settlement and other pending lawsuits, it's clear Gentilozzi's racing "hobby" has begun to take a bite out an empire he once estimated at $100 million.

Gentilozzi, 67, told the State Journal he can't talk about the settlement. He said his business is "healthy," and he's ready to move on.

But, according to court documents, he has agreed to sell unspecified real estate holdings as part of the settlement.

Meanwhile, claiming Gentiolozzi reneged on earlier agreements, Grand Rapids-based Independent Bank has sued to take back control of two of Gentilozzi’s other properties.

'I just could not get the courage'

Gentilozzi sent Harry Mohney a contrite email in October of 2007, acknowledging he hadn't returned $150,000 that Mohney’s company, Deja Vu Consulting, had provided for a sponsorship.

Despite owning nearly $100 million of real estate, he said, he couldn’t yet afford to pay the money back.

The deal had called for Gentilozzi’s Rocketsports race car to feature a Larry Flint’s Hustler Club logo during three races in Europe and Australia. But just before the first race, television officials balked at the prospect of airing images of the logo, which features a cartoon beaver. Rocketsports was forced to black out the images.

“The last 6-7 weeks have been just about the worst of my life," Gentilozzi wrote. “I had intended on talking to you when we played golf recently but I just could not get the courage."

Gentilozzi had recently learned he owed about $3 million in taxes related to a building sale, he told Mohney. And state officials, a major tenant, had decided to pay rent to Gentilozzi at the end of every month instead of the beginning.

“Suddenly within a few day(s) I would be $2 (million) short per month in paying bills and mortgage payments," he wrote. “More bad news for me."

He said he “raided accounts" to pay the bills on time.

“I have always prided myself on my judgement and business acumen," he wrote. “We also take pride (in) paying our bills."

Gentilozzi had paid back about $61,000, according to the complaint, but nothing for two years.

A judge ordered Rocketsports to pay the remaining $88,000 owed, but Gentilozzi wasn’t held personally liable for the debt.

Years later, he wouldn’t be so lucky.

'I didn’t have money'

Ryan Hunter-Reay is one of the best race car drivers in the world.

In 2012, he won the IndyCar Series Championship, awarded annually to the top driver in the country’s premier open wheel racing league.

Twice, ESPN has given him an ESPY, awarded to the sports world’s best driver — in any racing league.

Back in 2005, though, Hunter-Reay was a young driver whose career was upended when Gentilozzi fired him near the end of the racing season.

Gentilozzi is a big name in racing. As a driver, he won dozens of Trans-Am Series events and the 24 Hours of Daytona endurance race. Hunter-Reay struggled to find another team.

He testified in a deposition that it wasn’t until late 2007 that he finally got back into “mainstream racing" and in 2008 finally secured a full-time gig with a team owned by Bobby Rahal and David Letterman.

In July of that year, Hunter-Reay filed a demand for arbitration.

His Rocketsports contract had included a base salary of $120,000 and additional money for top-10 finishes, but Hunter-Reay wanted more than $3.5 million. He claimed Rocketsports had failed to provide competitive equipment. He said Gentilozzi “made numerous false statements that were… disparaging to (Hunter-Reay’s) reputation in the motorsports industry."

But three years later, Hunter-Reay sued Gentilozzi in U.S. District Court, saying he’d only received $230 — 0.008% of the judgement, as his attorneys would emphatically point out.

Hunter-Reay would later say he at first had to borrow money to pay his attorneys.

“I didn’t have money at the time because of the situation that (Gentilozzi) put me in," he said in the 2013 deposition.

The lawsuit dragged on for years, and it got nasty.

Hunter-Reay, who would later call the process a “nightmare" and “soap opera," had sued through his racing company, Ryan Racing LLC.

The lawsuit targeted Gentilozzi, his real estate company and five businesses controlled by Gentilozzi that own buildings in the Lansing area.

The suit alleged fraud and claimed Gentilozzi had created RSR as a sham company to drain assets from Rocketsports just before the arbitrator ruled in favor of Hunter-Reay.

“RSR was, even back in the days that I drove for them, referred to as RSR," Hunter-Reay said in the deposition. “And with a big judgement coming, and arbitration, it just so happened to be that the sign hanging on the building was changed but the — the company, Rocketsports or RSR, continued to work in the same business, with the same customers and the same employees, with the same telephone number, same websites."

They said his wife, Deborah Gentilozzi, used her company credit card to make personal purchases such as flowers and Tiffany jewelry.

And, during a 2013 deposition, they relentlessly quizzed Paul Gentilozzi over trips he’d taken with “numerous female friends."

During one testy exchange, Gentilozzi accused Hunter-Reay’s attorneys of badgering him about the nature of his relationships with women.

But the attorney continued: “Do you know why you made two — paid for two one-way (airplane) tickets for the president of Mandalay Bay’s wife?"

“I don’t remember why," Gentilozzi responded.

Q: What movie?
A: It was a Tadross production. She’s a stunt woman. The little — the black guy that did all the karate movies with the flat top, went to jail for tax evasion?

In December, after five years of litigation and with Hunter-Reay’s attorney bills approaching $1.4 million, the case went to a bench trial before U.S. District Judge Robert Holmes Bell.

Bell issued a final decision on Jan. 31, the day of his retirement.

The judge rejected Hunter-Reay’s allegations of fraud, but sided largely with the driver, holding Gentilozzi — and his businesses — liable for the original judgement, which had ballooned to about $3.3 million including interest.

"Rocketsports was, as Gentilozzi called it, an expensive ‘hobby’ of his," the judge wrote. “He used it for his personal benefit and pleasure, while attempting to avoid personal liability for harm that he caused."

“Because Rocketsports consistently relied upon loans from Gentilozzi to fund its business, and because it was insolvent, it was able to pick and choose which creditors to pay. Gentilozzi could breach the contract with (Hunter-Reay) knowing that (he) would have no meaningful recourse: Gentilozzi could abandon Rocketsports at any time and leave it uncollectable, which is what he did" Bell wrote.

But, to keep Hunter-Reay from seizing his assets, he would need to post what's known as a supersedeas bond, which the court requires when an appellant wants to delay payment of a judgement.

Gentilozzi didn’t secure a third-party bond, which is common. Instead, he proposed putting up four properties — with a net value of $5.7 million — as equity.

A signed term sheet submitted to the court redacts the specific dollar amounts, but a draft version of the settlement indicates Gentilozzi put up seven parcels as equity and must pay monthly installments to Hunter-Reay through 2022.

He also agreed to sell an unspecified amount of real estate within six months, with 75% of the net proceeds going to Hunter-Reay.

The guarantors listed on the settlement agreement include the same property owners listed in Gentilozzi’s proposed supersedeas bond:

In total, the properties have an appraised value of nearly $15 million, but mortgage balances of about $9 million.

A building at 108 S. Washington Square, which houses MLive Media Group's Lansing offices, is in the possession of a court-appointed receiver. Independent Bank, which controls the mortgage, claims Gentilozzi reneged on an earlier settlement agreement.

Independent Bank also is suing Gentilozzi over an agreement related to the East Lansing building that houses 3GT.

The building, at 3400 West Road, formerly housed RSR Racing, and before that, Rocketsports.

The bank claims Gentilozzi agreed to split the lot on which the building sits into three parcels, and give the bank two of them to help pay off a mortgage.

‘They all got paid’

Gentilozzi, 67, says he can’t talk about the Hunter-Reay settlement because of a confidentiality agreement, but he disputed the notion he’s being forced to sell the properties listed in the draft settlement agreement.

“Do I ever sell buildings? Sure I’ve sold buildings in my 47 years," he said. “I’m not sure how I can answer but my real estate is all healthy, producing, and it’s been real estate we’ve owned for decades."

“Ryan (Hunter-Reay) and I coexist in the same sport," he said. “I have a lot of regard for his talent. We had a disagreement, and unfortunately it took a long time to get settled. But it's settled, and it's behind us."

Regarding the other lawsuits, Gentilozzi repeatedly asserted that everyone eventually got paid.

The three casinos, he said, “weren't taking me to court to get paid. We were paying them, and they simply made it a matter of record."

A 2008 lawsuit from Podium Sports, a Dutch company representing a driver named Enrique Bernoldi, resulted in a “small token which was less than our legal fees," he said.

The lawsuit concerned a sponsorship deal. Court documents indicate Rocketsports settled for $500,000, but didn’t have money to pay. Gentilozzi agreed to pay up to $50,000.

“Did anybody else sue us to get paid," he asked. “No, because they all got paid."

Records indicate Gentilozzi owns several area buildings in whole or part in addition to the aforementioned properties, including the Victor Office Center at 201 N. Washington Square and a large shopping center which houses a thrift store, plasma center and other businesses at the intersection of West Saginaw Street and North Waverly Road.

Documents filed last week with the Ingham County Register of Deeds indicate Gentilozzi recently signed a $400,000 purchase agreement for the former location of Hack’s Key Shop, which abuts the parking lot of the Atrium Building.

The team drives two $1 million Lexus race cars and was recently featured in a national television commercial for the automaker.

“It’s a brand new program, and we’re only four races into the season," Gentilozzi said. “We’ve led races, and we’ve qualified well. We haven’t won yet but we certainly expect to." Christopher Haxel/Lansing State Journal