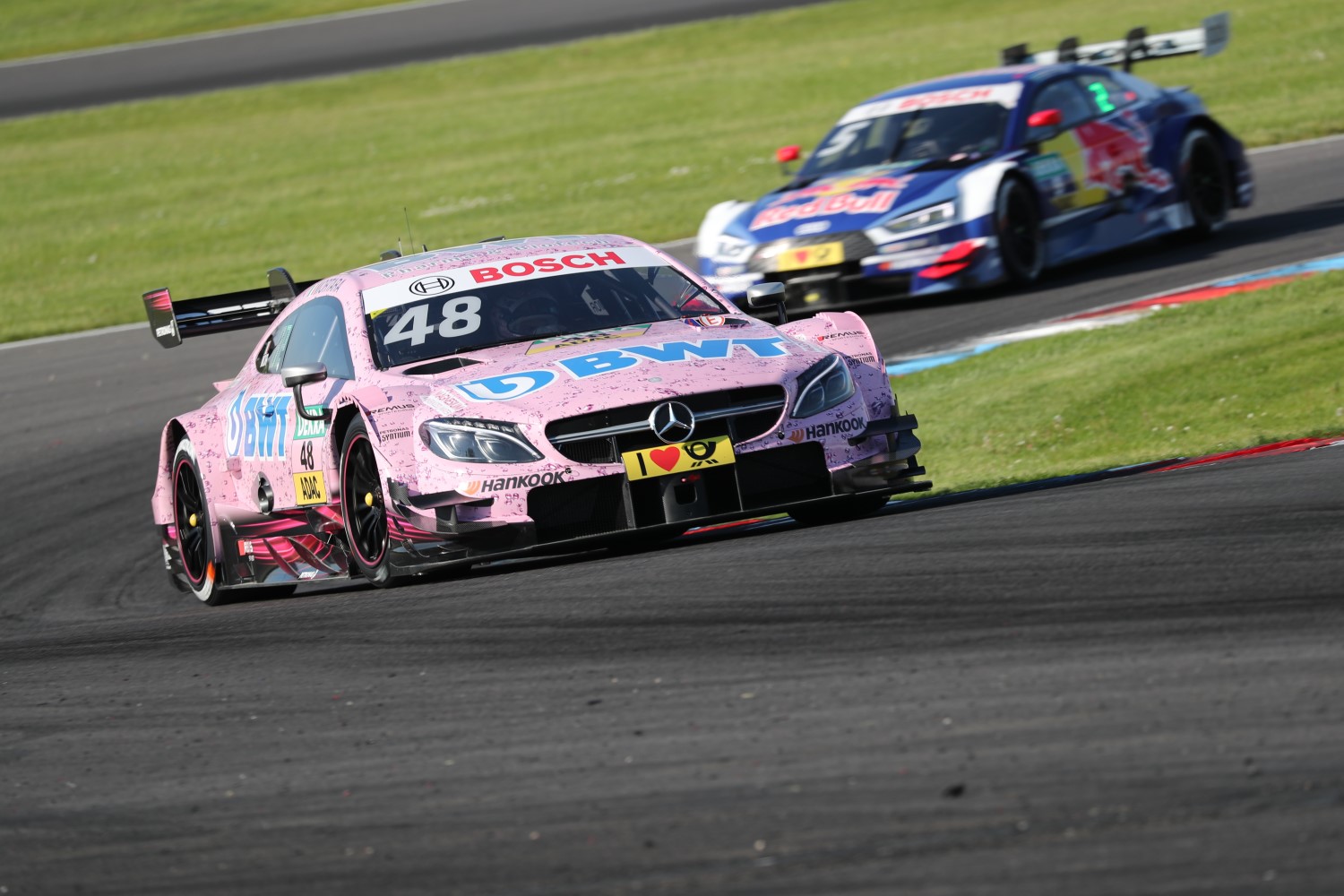 Second strike in a row for the ‘Pink Panthers': Mercedes-AMG Motorsport DTM driver Lucas Auer (Mercedes-AMG C 63 DTM BWT) kicked off the Lausitzring Motorsport Festival with his second win of the season. The Austrian started this season's third race from pole position and with his third DTM victory repeated last year's triumph at the Lausitzring when he took his maiden win in the DTM. After two wins and a fourth place in the first three races of 2017, Auer on 68 points now leads the drivers' standings. Mercedes-AMG Motorsport also head the rankings in the manufacturers' and team standings after the first three races of the season.

Robert Wickens (Mercedes-AMG C 63 DTM Mercedes me) started the third race of the season alongside Auer on the front row of the grid. After losing second place during the initial phases of the race, he retook P2 after putting up a strong fight and making a fast pit stop. The Canadian hit back with a P2 finish at the Lausitzring following a tough weekend at the season-opener in Hockenheim.

Gary Paffett (Mercedes-AMG C 63 DTM Mercedes me) placed sixth in his 150th DTM race to maintain second place in the drivers' rankings. The British driver has contested three-quarters of all races in the ‘new DTM' since the year 2000. Only nine drivers have ever completed more races than the 2005 champion in the history of the race series.

Qualifying: The first points of the weekend were again awarded in the first qualifying session at the Lausitzring. Two Mercedes-AMG Motorsport DTM drivers, Lucas Auer and Robert Wickens, qualified on the front row. Auer got three points for his second pole of the season and Wickens two points for P2.

Looking ahead to race 2: The fourth round of the 2017 DTM season starts on Sunday at 3:18 pm CEST (live on ARD TV at 3:00 pm CEST). Third practice will take place before that at 09:00 am CEST followed by the second qualifying at 11:30 pm CEST (live on One at 11:25 CEST). During each race weekend, we will provide live timing data, live commentary, fan voting and exclusive behind-the-scenes videos of the Mercedes-AMG Motorsport DTM Team on our website at: www.mercedes-amg-motorsport.com/dtm.

Comments after the race

"That was a super race – absolutely amazing. Congratulations to the entire team and, of course, to Robert for coming second. I'm really pleased. Balance was terrific today, and our tyres were extremely consistent. My driving style and a brilliant car combined to give us victory today. My second stint was super. It's always difficult to win, but I set the pace today. Still, you can never sit back and relax in the DTM because you always have to keep an eye on tyres and manage degradation. I share the team's delight now at winning but must turn my focus back to tomorrow's second race.

"P2 is fantastic, but it wasn't an easy race. I lost second place on the grid right at the start when Martin overtook me using DRS. However, I was confident that I would be able to retake the position provided we didn't pit on the same lap. I did it and then I went off in pursuit of Luggi, but he was too far away. I've always managed really well at the Lausitzring. Maybe bumpy tracks just suit me. I finished on the podium twice here last year and again today. It would be terrific to secure another podium tomorrow."

"Overtaking here at the Lausitzring isn't easy, so starting from P9, we had to try and do something with strategy. The car was pretty good, but I think we underperformed in the qualifying. I thought we deserved to be further up. We decided to pit quite early, which gained us a few places by the time the pit stops were through. The difficulty with this approach is that when you leave the pits on the new tyres, it's very slippery. It takes a few laps to get the temperature back in the tyres. I did quite well after that and ended up in a fight with Rocky, Ekstrom and Green. I managed to beat two of them and finish in P6, which was good. We got some decent points today, and I think we've got a car quick enough to be on the podium tomorrow."

"It's been a positive day for me. We were practically nowhere after practice. I had no feeling for the car. We made changes to setup after that, and things improved during the day. I'm usually a little better in the race than in qualifying. I had a good race in the end. I gave it my all and improved by three places to P7 which was a big increase on my grid position. If I can manage to qualify further up front, I can then fight for better finishes."

"From P13 to P9 – I can be happy with that. However, it was, above all, a mega-team result for us with five Mercedes in the Top Ten. My race went quite well, and we can build on that. The team has produced a real cracker of a car for us over the winter, a real goer. Nevertheless, we must stay grounded, because this was only the third race of the season, and there's still a long way to go. We've definitely made a successful start, though. This run of successes is giving the entire team a boost. We have a strong squad of drivers and can push each other along. So far, it's been Luggi, who's set the pace. We can take our cue from him as we push even harder."

"DTM is close racing. I didn't really expect Blomqvist to try it on the outside. On cold tyres with no tyre blankets, that's what we expected. I was at fault, because I locked an inside wheel. I touched his back and made him spin. It's hard when you get a drive-through penalty but that's the rules and I have to accept it. A difficult day for me, but a very good one for the team. Well done to Lucas! He's been outstanding so far this year. The pace is there when everything works right. We saw that with Lucas. Now we need to reset tonight and try to come back and at least get on the podium tomorrow if we can. But it's been a tough weekend until now. Still, tomorrow is another day, and I'm keeping my fingers crossed."

"That was an extremely strong race from Luggi and Rob. It was especially impressive to see how both guys maintained their excellent starting positions. Of course, our pit crews also contributed a great deal. The stops were really good. Gary also showed his class in his 150th DTM race and scored important points. A one-two win and five Mercedes in the Top Ten – what a great start to this race weekend!