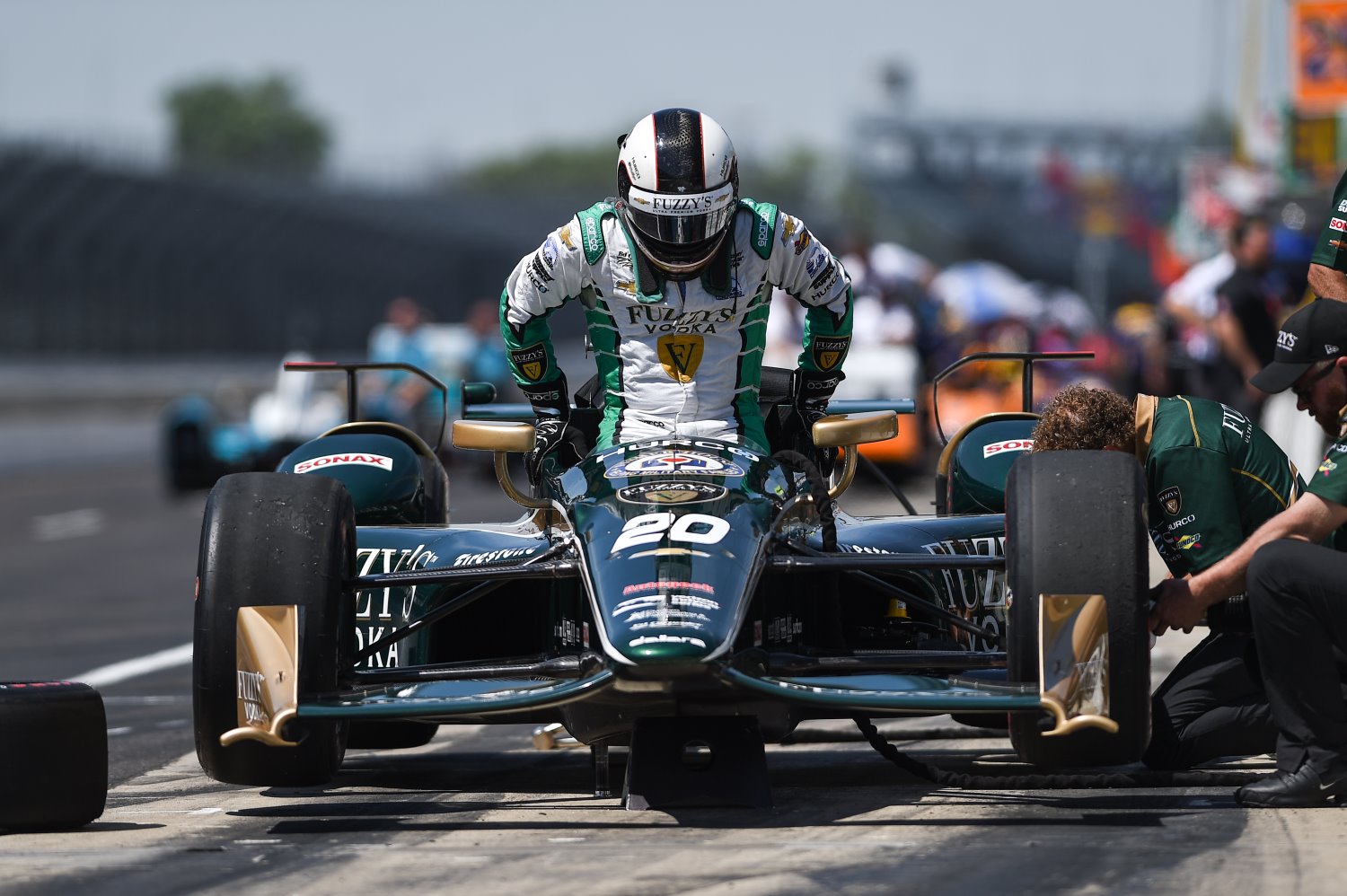 Strong, gusting winds limited running by teams on the third day of practice for the 101st Indianapolis 500 presented by PennGrade Motor Oil, but a number of competitors persevered and logged important fact-finding laps.

Team owner/driver Ed Carpenter posted the fastest of 408 total laps turned by 21 drivers in the six-hour session hampered by wind gusts reached 40 mph. Driving the No. 20 Fuzzy's Vodka Chevrolet, Carpenter ran a lap of 222.894 mph at the beginning of the day's final hour that was unassisted by an aerodynamic tow from a car in front. Marco Andretti has the fastest lap of the week, 226.338 mph, run on Monday.

"I thought it was important to run on a day like today just because it is a challenge," said Carpenter, the two-time Indianapolis 500 pole sitter looking to make his 14th start in the race scheduled for May 28. "The wind was very, very gusty, variable. And to me, if you can go out and get comfortable in conditions like that, I think it bodes well for the race car and how comfortable you can be.

"And you never know, it could be this windy on race day."

Scott Dixon, the 2008 Indy 500 winner and four-time Verizon IndyCar Series champion, clocked the second-fastest lap of the day, 222.599 mph in the No. 9 Chip Ganassi Racing Honda. All four CGR cars turned laps – Dixon logging the most, 47 – as the team honed in on improving car setups before calling it a day with two hours remaining in practice.

"We tried to get through some big-ticket items and we weren't real happy with the car (Tuesday) across the board with all four cars," Dixon said. "We've been struggling. We had some ideas we needed to try and today felt a lot better. A good improvement."

JR Hildebrand, Carpenter's teammate in the No. 21 Preferred Freezer Services Chevrolet, was third fastest with a lap of 220.553 mph. Hildebrand was the busiest driver of the day, completing 54 laps, with Carpenter turning the second most (52).

"I felt pretty good about the amount of work we were able to get done today," Hildebrand said. "When we got going initially, we felt it was a little suspect how good of a read we could get on changes since the wind is blowing hard. I'm encouraged by our ability to go out and feel changes despite gusty winds. It was nice to go out there with not too many other people and just run through our own program."

Indianapolis 500 rookie Fernando Alonso, the two-time Formula One champion seeking to make his debut on the 2.5-mile oval, was the only Andretti Autosport driver of the six entered to turn a lap at speed. The 35-year-old Spaniard completed 39 laps with a best speed of 219.533 mph that ranked fourth on the day's speed chart.

"It was tricky," Alonso said of the windy conditions. "Very little running for the big guys, but for me any condition is a good lesson. Today was about that, a lesson about how to drive with strong winds and how to set up the car corner to corner.

"Everything was according to plan. The team, I think, used those runs also to test something on the back (end), the engine, for tuning, and something like that, so I think it was a productive day as well."

Two more days of practice remain before qualifications Saturday and Sunday to determine the 33-car field. Practice runs from noon-6 p.m. ET Thursday and Friday and streams live at RaceControl.IndyCar.com. Qualifying on Saturday is available from 11 a.m.-3 p.m. on the WatchESPN app and airs from 4-6 p.m. on ABC. Sunday's qualifying, which determines the Verizon P1 Award pole winner and sets the grid, is available from 2:30-4 p.m. on WatchESPN and from 4-6 p.m. on ABC.

CONOR DALY (No. 4 ABC Supply AJ Foyt Racing Chevrolet): "Obviously we didn't do a lot of running today because of the weather conditions, but I would have loved to have run more if it was possible, but it was probably a smart decision to not go out there with how the wind was. When we did go out there, the car was really good. I was really happy with the changes we made overnight so hopefully we can run more tomorrow."

MAX CHILTON (No. 8 Gallagher Honda): "When you're doing 220 plus into the corners, the wind here today can really affect you. It's important to go out and run and get the mileage in no matter what the conditions. You could turn up on race day and these winds could return. We're collecting all the data we can so we can be prepared for any circumstances we encounter."

SCOTT DIXON (No. 9 Chip Ganassi Racing Honda): "I think it was just really hard to be consistent out there with these windy conditions. When the gusts are around 25 mph that makes it tough to navigate in the turns. But we're still learning. There's a lot that we still need to get through and you have to remember that it's a new car for us this year. There's still a lot of aerodynamic items we're working on and learning from."

TONY KANAAN (No. 10 NTT Data Honda): "It's unfortunate that we were only able to get eight laps in today, but the windy conditions were going to make it too difficult for us to get what we needed out of the car. We wanted to get as much out of the day as possible, so we worked on some hot stops with the team. We're hoping conditions will be better tomorrow so we can get back to getting the car where it needs to be in traffic and in qualifying trim."

CARLOS MUNOZ (No. 14 ABC Supply AJ Foyt Racing Chevrolet): "Today was kind of a weird day. There wasn't much running. We just tried a lot of different numbers to have for the next few days. We really didn't learn much. Not a whole lot to learn from today, we just got some numbers for all the engineers. We'll see if the weather will help us tomorrow. The wind has been an issue for the car. Just hoping for nice weather tomorrow so that we can tune the car."

GRAHAM RAHAL (No. 15 Steak 'n Shake Honda): "We didn't get much done today due to the difficult conditions. With the wind gusting like it did, it was hard to get a feel for how the car is. Sure, you can get some work done, but you are also taking a big chance and giving yourself an opportunity to write off a car too. We're going to have a lot of tires saved up and ready to go tomorrow and the next day."

ORIOL SERVIA (No. 16 Manitowoc Honda): "We wanted to run lots of laps and miles to prepare for the race, but the weather didn't cooperate. It was very windy and we decided not to run too much. We did some pit stop practice, which in my case is something we needed to do anyway, since my crew is not together the whole year so that was a positive. Another positive is that everyone is on the same foot. Tomorrow should be a little less windy, still windy but less gusts, so we can hopefully get some laps in."

ED CARPENTER (No. 20 Fuzzy's Vodka Chevrolet): "The wind was definitely the theme of the day. I was a little bummed that it kept more people from running, just to get some traffic running in. We just stuck to our program today, minus the race sim part. We got some good test items in earlier in the day and got used to the wind, got the car balanced in the wind, and then we tried a trim step to feel the car in these conditions should qualifying or race day be similar in terms of weather. It was a productive day. I wish we could have had a race sim with traffic, but hopefully we'll get it done tomorrow, despite a similar forecast. I can't imagine most guys will take two days off."

JR HILDEBRAND (No. 21 Preferred Freezer Service Chevrolet): "I felt pretty good about the amount of work we were able to get done today. When we got going initially, we felt it was a little suspect how good of a read we could get on changes since the wind is blowing hard. I'm encouraged by our ability to go out and feel changes despite gusty winds. It was nice to go out there with not too many other people and just run through our own program. Granted, I would have liked to run with other cars since the conditions were poor to see how we would do. Overall it was a good day, and I'm happy with where we are at."

SAGE KARAM (No. 24 DRR Mecum Auctions Chevrolet): "We pretty much wrote off today. This is going to be windiest we'll see. You're not going to learn much from a day like today. It would be too risky. We went out to do some pit stop practice to get the guys ready to go and make something of the day. We are set to do some good work on Thursday."

FERNANDO ALONSO (No. 29 McLaren-Honda-Andretti Honda): "It was tricky (so) very little running for the big guys. But for me any condition is a good lesson. Today was about that, a lesson about how to drive with strong winds and how to set up the car corner to corner. Everything was according to plan. The team, I think, used those runs also to test something on the back (end), the engine, for tuning, and something like that, so I think it was a productive day as well."

ZACH VEACH (No. 40 Indy Women in Tech Championship Chevrolet): "Day 3 here at Indy, conditions were a little tough today for sure, just with the gusts of wind. We were fighting 20-30 mph winds all day, so really didn't take too much to the track. I think we ran about 20 or 30 laps in the morning and then waited for it to die down until about 4 p.m., and got out there and honestly, we made a lot of progress too even with the conditions being tricky. I think Andy Brown and I just kept working with the setup and it just kept getting quicker and quicker. For the conditions I think it only set us up better for race day, so more than excited for tomorrow. I think, hopefully, we'll have better weather where we can start running in traffic and things, but I don't know, I'm just feeling really confident with what we can do here at Indy."

CHARLIE KIMBALL (No. 83 Tresiba Honda): "It's always frustrating when you aren't able to get a full day of track time here at IMS. We weren't happy at the end of the day yesterday with the car in traffic, so we were hoping to work on that today but with the windy conditions we weren't able to do that. We think we found the direction we need to go with the No. 83 Tresiba Honda, but until we can run in traffic in conditions where I can feel the changes we've made to the car, the risk just isn't worth the reward."