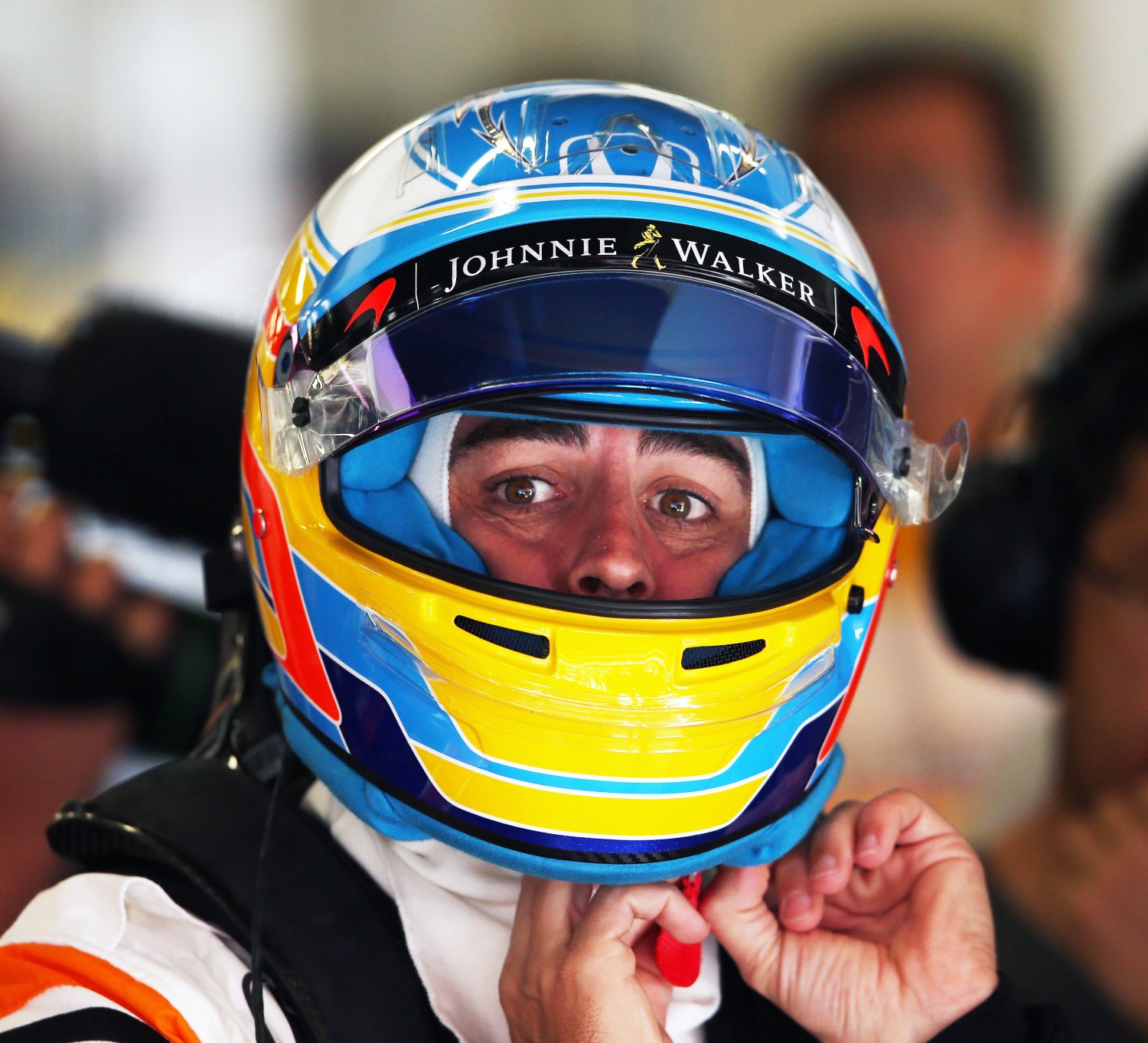 F1 fans will not see the Spaniard at Monaco in a fortnight, as he is doing the Indy 500 instead.

"You're racing in the most important category in the world and then you're not doing Monaco to do another race? I think if you ask any team boss in history he would say it's not correct," the Brazilian added.

But Alonso's McLaren boss is Zak Brown, and the American got on the private jet with the 35-year-old, bound for Indianapolis.

"Tomorrow at 9am I will be at Indy for the first practice session," Alonso said before departing. "So I have 14 hours to relax, 9 of which will be on a plane but now I switch to Indy mode and all of my attention is on this adventure."

Alonso said he has no regrets about skipping Monaco, as even if he repeated his stirring performance of Barcelona, the top three teams will remain ahead of McLaren-Honda on the prestigious streets.

But asked if finishing Sunday's race in Barcelona was a turning point, Alonso said: "No, the turning point will be when Honda brings something new."

Alonso told the Spanish newspaper ABC he had hoped the dawn of the all-new 2017 regulations would be Honda's turning point.

"In formula one the normal thing is to hire the best engineers and copy the others," he said. "But Honda has remained true to its philosophy and took a while – too long – to realize that they need more from the outside," he said.

18-year-old Stroll has struggled in the sister Williams so far this year, but veteran Massa said Monaco in a fortnight will be his biggest eye-opener to date.

"Monaco is probably the most demanding track of all," Massa, who admits he is mentoring Stroll, told Le Journal de Montreal. "Even experienced drivers have problems there.

"The walls arrive very quickly. And the cars are wider this year but the streets are just as narrow as before," the 36-year-old smiled.

"So it's going to be hard for Lance in Monaco," Massa continued. "Nothing compares to it.

"But of course I'll be there to help him. The setup is crucial in Monaco and I will share it with him. Where and how to brake is also an art that must be mastered."

Recalling his own Monaco debut as a youngster in 2002, Massa admitted: "Like many others in their first time, it was catastrophic for me even if I did the 13th time.

"I was constantly avoiding contacts with the wall or other cars and my race ended abruptly," Massa said.

Indeed, even the F1 teen sensation Max Verstappen has had a tough time at Monaco in the last two years.

"That's one example among so many others," said Massa. "Many drivers hit the wall trying to do too much, not only Max. Even the veterans are not immune."

And not just that, Massa admits that Monaco has not been a happy hunting ground for Williams.

So that could make a difficult situation for Stroll even worse in two weeks.

"At the risk of repeating myself, Lance must continue to learn," said Massa. "He's in a difficult position, but I've been there.

"A lot is being asked of him in his first year and expectations are high."

(GMM) Team owner Dietrich Mateschitz says Red Bull is having to be "patient" as it tries to catch up with F1's top two teams.

The former champions made a step with its Barcelona upgrade, but the RB13 is still clearly behind Mercedes and Ferrari.

"We have to catch up and especially the improvements from our partner Renault are delayed," Mateschitz, the low-profile founder of the energy drink company, told Salzburger Nachrichten newspaper.

"So we have to be patient until we get closer to Mercedes and Ferrari," he said.

Amid Red Bull's struggle, team drivers Daniel Ricciardo and Max Verstappen have each been linked with a potential move to Ferrari for 2018.

But Mateschitz said the pair's respective contracts are "of course" watertight.

"And where would they go?" said the Austrian billionaire. "There will not be places free at either Mercedes or Ferrari."

Finally, 72-year-old Mateschitz commented on the new era in F1 overseen by Liberty Media, as a series of fan-friendly initiatives made their bow in Barcelona at the weekend.

"It is clear that the new owners are very keen to innovate," he said, "and above all to do something more for the audience.

"We also have to give them time, but they do the right things so far," said Mateschitz.

Asked what his wishes are for the future direction of the regulations, he answered: "We would want an independent engine manufacturer so there is no longer this dependence on manufacturers.

"But this is a long-term wish for the regulations after 2020," added Mateschitz.

The report claims Verstappen, who earlier groomed his teenage son for F1 stardom, will be on hand as a Red Bull talent scout and consultant.

It is believed a formal deal between the former Minardi driver and Red Bull is not yet done, as the parties discuss the scope of Verstappen's eventual role.

Verstappen confirmed: "Helmut (Marko) would like me to and I am open to it."

(GMM) Sauber has left crisis-ridden McLaren-Honda as the only F1 team yet to score a single point so far in 2017.

Recently injured and also the subject of criticism, Pascal Wehrlein delivered 4 points to the small Swiss team in Barcelona.

"We knew Pascal is very talented, which is why we signed him," boss Monisha Kaltenborn said.

"I have said already that the criticism of him was completely unfair and unprofessional at times, so I wonder what the critics will have to say today," she added.

But Sauber's result is a huge blow for McLaren, as it further compounds the former grandee's misery by stranding the Honda-powered outfit in dead last in the lucrative constructors' world championship.

Asked if Sauber can stay ahead in 2017, Kaltenborn said: "I have no idea.

"But we do not underestimate a strong opponent like McLaren, which is a large and experienced team.

"They have a lot more resources and people than us, so we take this into account and will continue to work hard all season," she added.

Force India has been handed a â‚¬25,000 fine, suspended for a year, after it failed to correctly display its numbers during the Spanish Grand Prix.

A directive was issued to teams prior to the race at the Circuit de Barcelona-Catalunya, following a meeting of the F1 Commission and Strategy Group, in order to enlarge numbers, to aid driver identification.

Force India will now work with the FIA in order to rectify the situation prior to the next event in Monaco.

"In view of the following mitigating circumstances, the fine is suspended for a period of 12 months pending no further infringements of this nature," read a statement.

"The mitigating circumstances are: the competitor was not challenged about the numbers prior to the race; the numbers (size, color and location) were not changed during the event; the Competitor has offered to work with the FIA and rectify the situation immediately."

Force India collected a haul of 22 points, courtesy of fourth for Sergio Pérez and fifth for Esteban Ocon, as it moved to within 19 points of Red Bull.

Wehrlein: Penalty better than staying out

Pascal Wehrlein says taking a penalty for cutting the pit lane entry bollard was more profitable than not stopping for fresh tires, as he bagged his and Sauber's first 2017 points in Spain.

Wehrlein, running a one-stop Soft/Medium strategy, as opposed to the two-stops favored by the bulk of his rivals, moved into the top 10 through extending his first stint.

Wehrlein came in on lap 33, benefiting from the implementation of the Virtual Safety Car, though the late call meant he did not stay to the right-hand side of the bollard, as required.

The German was handed a five-second penalty, but he was able to build enough of a buffer to ensure his sanction demoted him behind only Carlos Sainz Jr., as he took eighth.

"I just got the call when I was already there in the last corner," he said of his pit-stop.

"I knew when they called me so late it's important to come in, I missed the bollard, but if I wouldn't stop in this lap, everyone behind would have overtaken me, so this was the only chance to get some points.

"I expected a penalty, probably I hoped for a penalty next race, or a fine for the team or something!

"But I'm also happy about the five seconds, it's better than a drive through penalty."

Wehrlein added that it was crucial to keep Sainz Jr. behind as he set about building a gap over his midfield rivals, in order to negate the impact of the penalty.

"At the end Sainz Jr. put a lot of pressure and he tried many times [to pass], but it was so important to keep him behind and then make a gap to the other guys behind him as I got the five-second penalty," he said.

"At the end I tried to make a bigger gap, every lap was like qualifying, [while in] the first part of the race, the most important part was to manage the tires and still be quick,

"Overall it was a great race, a great from the team, so I'm very happy."

Jenson Button has not ruled out the possibility of returning to the Formula 1 grid on a full-time basis in 2018.

The 2009 World Champion announced he was taking a sabbatical in 2017, but was retained by McLaren-Honda as a reserve driver and will cover for Fernando Alonso at the Monaco Grand Prix whilst the Spaniard heads to the Indianpolis 500.

Button had earlier suggested that his time in Formula 1 would be "done" after Monaco, but he has revealed that there is a clause in his contract that does allow him to return for a full season.

"I can't rule it out," Button told Press Association Sport. "I have a contract with the team to race next year so I would definitely not rule anything out."

Button also said that he has not been short of offers since his break from the sport.

"I had so many options to race this year it is hilarious," added Button, who was attending a press event for Santander.

"That even went into this year with two different teams asking me to race. I have no interest in doing that.

"I am thinking of Monaco as my only race this year. Obviously if I am asked again at another point in the year I am here to fill that seat. But I am not going to go out of my way to ask to drive because the whole idea was not to."