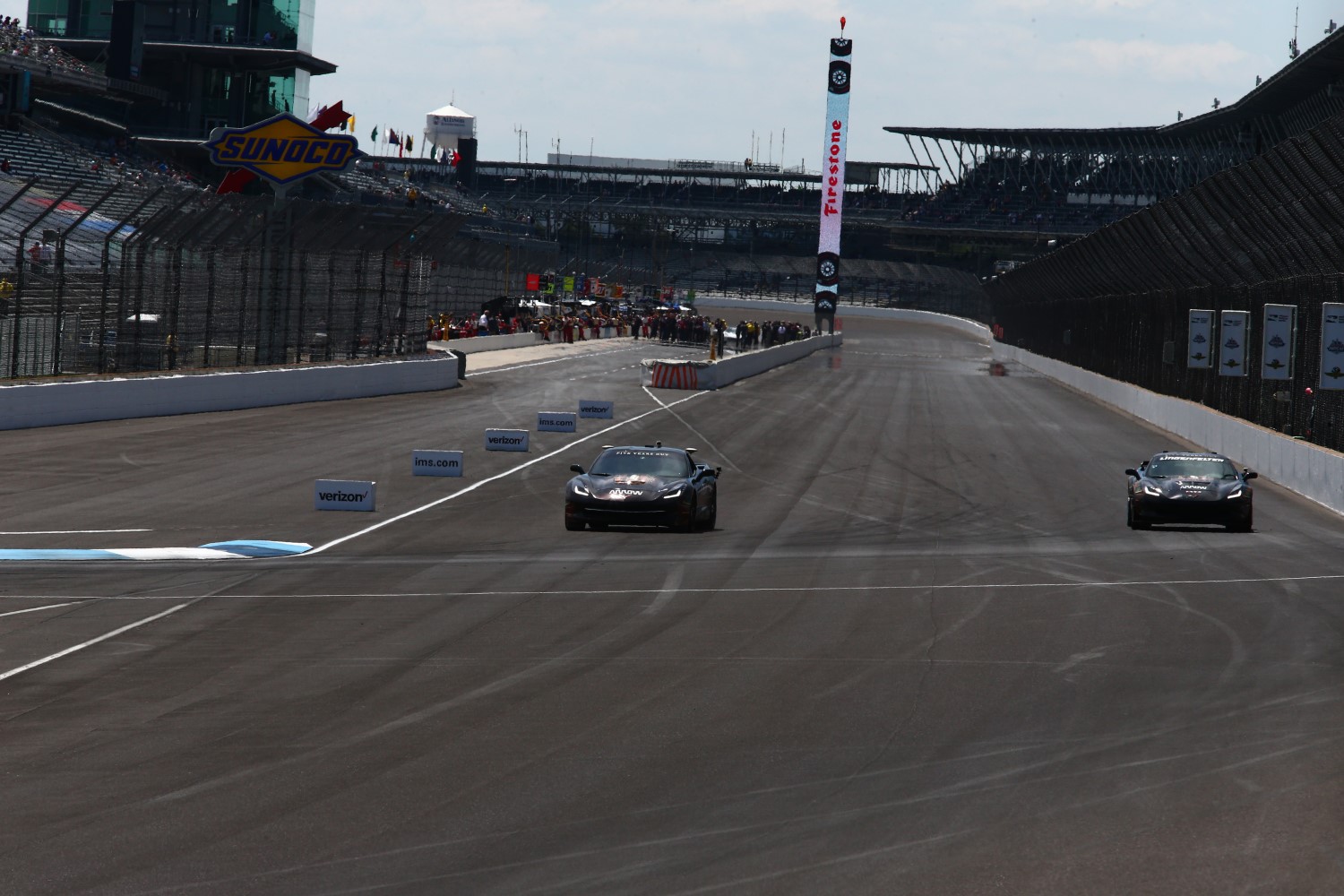 Schmidt, who is paralyzed from the neck down, drove the Z06 SAM Car, a semi-autonomous vehicle that global technology company Arrow Electronics modified for him. Sensors mounted on a high-tech headset that Schmidt wears connect to infrared cameras mounted on the dashboard and detect his head-tilt motions to steer. A sip-and-puff device that Schmidt breathes into enables him to accelerate and brake. Voice commands enable Schmidt to switch gears and turn the SAM Car on and off. Two-time Indianapolis 500 starter Robby Unser was Schmidt's co-driver, assisting him with spotting.

SAM SCHMIDT: "I lost, which really, really sucked. It was great. It was weird. Seventeen years, driving down the straightaway 130 miles an hour side-by-side was fantastic, and doing it with Mario Andretti was great. I knew he was going to be giving me enough room, and we didn't want to beat up the cars too much. I think we could have if we'd have wanted to. We were that much in control. It felt great. It felt normal. We did have more horsepower than he did. I think the plan was to try and pass him on the front straightaway at the stripe, and we picked up a bunch of marbles in Turn 14 and the went straight. We had to lift off the gas and get back into it. It was no different than driving an Indy car.

"We came up short. He's a pretty smart old codger, too, so that might have been the plan. The whole experience: Seeing the fans, everybody going crazy, having a lot of our peers out there on pit lane. The team has worked a whole year for this, to get the cars, the equipment and the technology to this point. It showed. It felt totally comfortable. It was really exciting. It's really turned the corner. It's not just the technology throughout IMS, but I feel really comfortable using this technology for a lot of applications to get people back to work.

"Our big push now is to get this into tractor-trailer rigs, so people with disabilities can drive over-the-road tractors. I think that's just around the corner. I'm a little bit numb because these things are happening every six months or every year. I was amazed the first time I drove this thing 40 miles an hour. Now that we've done that, we've done 152, we've done Pikes Peak. It still remains being amazing, but I don't know where the end is.

"They keep pushing the envelope. It's fantastic. It comes down to confidence, confidence in the systems, confidence in the cars. That's what Arrow does. They work with the DOD (Department of Defense). They're familiar with redundancies. They've got to do everything right. Total confidence.

"Mario had total confidence, too, to drive the thing hard. It was good."

(About Arrow): "We wouldn't be here without them. They thought of the process originally four years ago. They got me in the car, got me to 100, they continue to advance the technology. It's them. It's all the engineers. It's Mike Long at the top driving the bus and telling everybody what he wants done. I wouldn't be surprised to see us do some pretty crazy things in the next 12 months."

(About future races): "There's a few people I didn't beat when I was racing. One of my lifelong idols is Rick Mears. That would be fun to get him out here. This does open up opportunities to race a few more guys at different circuits. It feels normal. The first time in 17 years I've felt normal. There are so many things I haven't been able to teach my kids to do, to throw a football to driving a stick shift. To be able to come back and do this kind of stuff makes up for it a little bit."

MARIO ANDRETTI: "Well, now I can sleep tonight. I tell you, this one really had me going. I had to shut off all my natural senses because, obviously, you just need all the practice you can get. And they gave me every opportunity, but still, I really wasn't too sure.

"I didn't know how much I could trust myself. I'm just thankful the cars are coming in with all the fenders on." (With all the history you have in racing and all the technological advances you've seen with cars, what do you think about where we are right now?): "This is absolutely phenomenal. The benefits that this will provide worldwide to individuals like Sam, war veterans and so on and so forth; that alone with what Arrow Technologies has done is so noble. Again, I can't say enough for how good this can be. It needs to be known that this technology is available."

JAMES HINCHCLIFFE: "Obviously, we got to see him drive a car again for the first time at the Speedway when they first came out with the SAM car project. But for him to now be able to go around the road course racing against none other than Mario Andretti, it's incredible what Arrow's done. It's such a cool feeling for everyone here. This company, it's so remarkable what they do. The whole SAM car project was their idea. They came up with it. They approached Sam on it. It just shows that they're always continuously trying to develop, trying to make the world a better place for everybody in it."

05/13/17 Sam Schmidt didn't win his race today against Mario Andretti, but he accomplished something else: he felt normal again.

Paralyzed from the neck down in a crash during an Indy car test session in 2000, Schmidt dueled with Andretti in specially modified Chevrolet Corvettes around the Indianapolis Motor Speedway road course. The result? Schmidt felt like a racer again. He felt like himself.

"It feels normal," Schmidt said. "The first time in 17 years I've felt normal. There are so many things I haven't been able to teach my kids to do – to throw a football, to drive a stick shift. To be able to come back and do this kind of stuff makes up for it a little bit."

Schmidt, the co-owner of Verizon IndyCar Series team Schmidt Peterson Motorsports, has been instrumental in the development and advancement of semi-autonomous motorcar (SAM) technology. Along with Arrow Electronics, the team's primary sponsor for James Hinchcliffe's No. 5 Honda that competes in the Verizon IndyCar Series, he's tested various forms of the cars, which use head movements and inhalation and exhalation to steer, propel and brake.

Schmidt uses a breathing tube to accelerate and brake, and a special camera mounted to his helmet to steer. He's previously tested it on the IMS oval, the Long Beach street course, the Sonoma road course and the course used for the annual Pikes Peak Hill Climb. But this was the first time he'd raced the car against someone in like equipment.

"It was great," Schmidt said. "It was weird. (After) 17 years, driving down the straightaway 130 miles an hour side-by-side was fantastic, and doing it with Mario Andretti was great."

"Now I can sleep tonight," Andretti said. "I tell you, this one really had me going. I had to shut off all my natural senses because, obviously, you just need all the practice you can get. And they gave me every opportunity, but still, I really wasn't too sure. I didn't know how much I could trust myself. I'm just thankful the cars are coming in with all the fenders on."

Schmidt may not have won the race, but he still felt like a winner. He even performed a celebratory tire burnout at the end of the front straight.