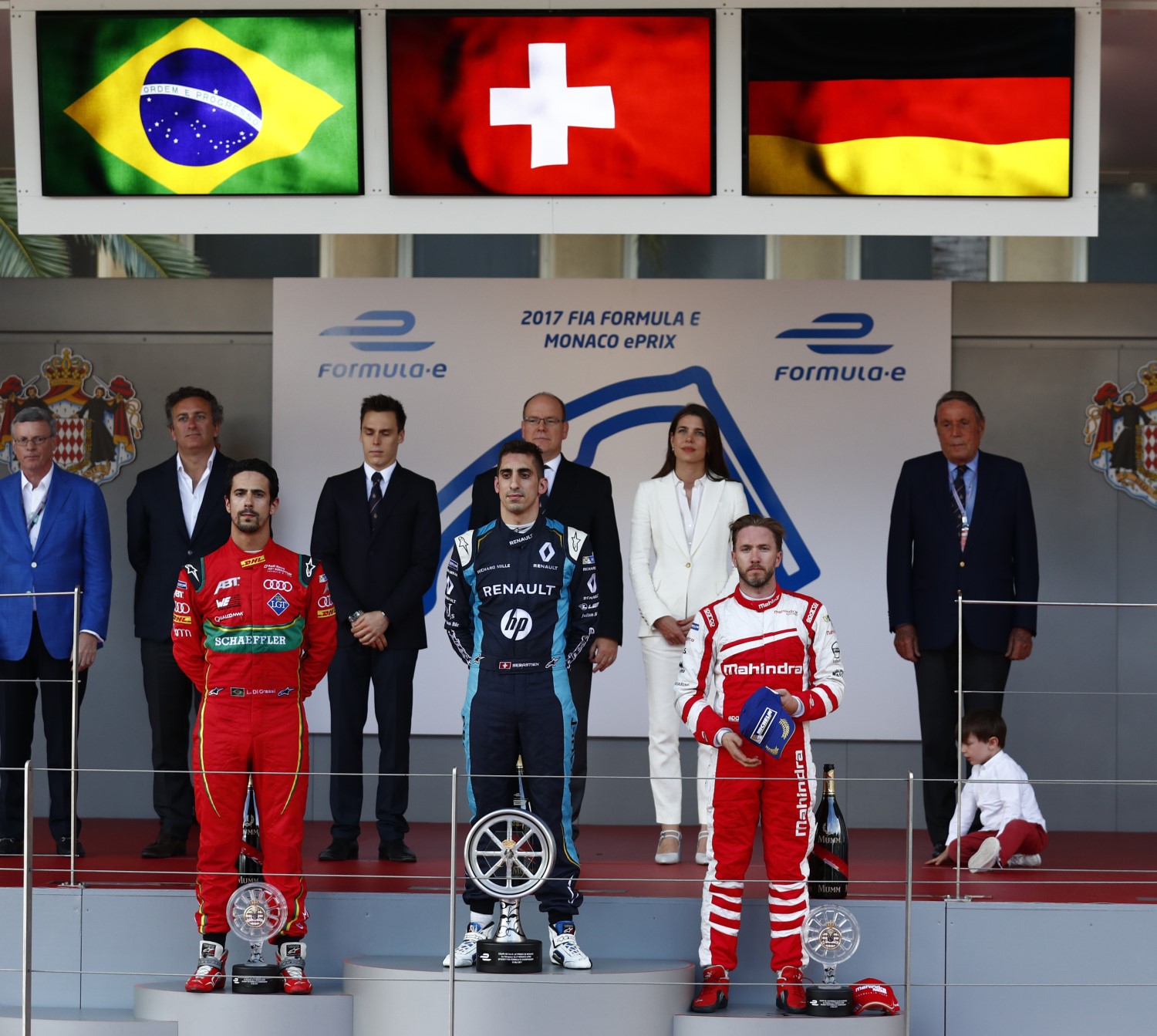 MONACO (May 13 2017) – Sebastien Buemi withstood enormous pressure from Lucas di Grassi to claim his fourth FIA Formula E Championship win of the season in Monaco, and extend his points lead to 15.

From his first Julius Baer pole position of the season, Buemi made a perfect start and soon established a comfortable lead over his title rival, who in turn was easing away from Nelson Piquet Jr. in third.The NextEV NIO driver had no such luxury, as the TECHEETAH of Jean-Eric Vergne was swarming all over him. The Frenchman was clearly anxious to make a move and stop the front two from getting away, and in his desperation, he tried an ambitious move around the outside of the Turn 3 hairpin. The cars were completely side-by-side and as they banged wheels Vergne was sent crashing into the Tech-Pro barriers. Remarkably Piquet survived having only lost third place to the Mahindra of Nick Heidfeld, but Vergne’s car was heavily damaged and the Qualcomm Safety Car was deployed as it was recovered.

After the success of the ABT Schaeffler Audi Sport’s tactical gamble in pitting di Grassi early last time out in Mexico, all the teams opted to follow the Brazilian into the pits for the mandatory car change during the caution period. This was the prelude to a sensational finish that had the more than 18,000 fans who packed the grandstands on the edge of their seats. After using his FanBoost to briefly open up the lead to 1.6s, Buemi could only watch his mirrors as di Grassi homed in over the closing stages.

As they crossed the line to start the 51st and final lap, Buemi’s lead was down to just 0.4s, but despite having the leader in his sights, di Grassi couldn’t quite get close enough to attempt a passing move, and Buemi duly notched up his 10th win in the all-electric racing series, defending his Monaco ePrix crown in the process.

Buemi said: “In the first stint I managed to pull a little gap, but Lucas was using a bit less energy than me. When the safety car came out we knew we had to try to learn from them [ABT] after what they have done in Hong Kong and Mexico by stopping very early, so that was the right call and then we knew it was going to be very difficult because to finish we would have to save quite a lot of energy. I managed to build a bit of a gap just to be safe and he played with me a bit because when we were passing the guys who were a lap down he consumed a little bit more than expected so I had to do the same. Then he did two laps where he kind of backed off, which was good for me, but in the end we both finished with nothing left."