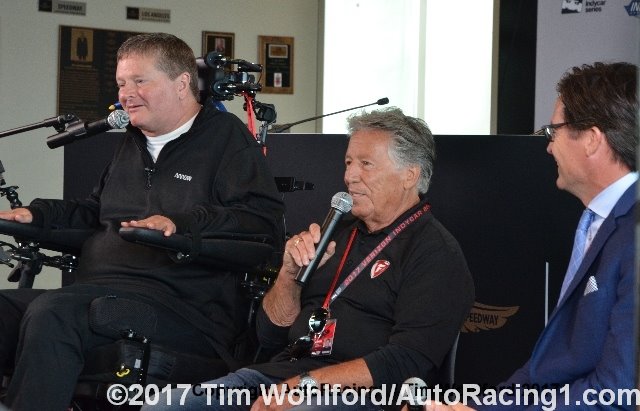 Chevrolet continued their dominance of road courses this morning. Or was it a Penske domination? First round of practice saw Will Power fastest, followed by Scott Dixon, Josef Newgarden, and Simon Pagenaud. Juan Pablo, looking like he's loaded for bear, was 7th fastest.

The media center held a press conference with Sam Schmidt, Mario Andretti, and Robby Unser. Do you remember that lap that Sam took in the 'Vette around Indy? Well, the engineers continue hard at work, and to make things more fun they recruited Mario to "drive" one of those handicapped-accessible vehicles in what they're calling a "race". The event between Schmidt and Andretti happens tomorrow. "Just don't let me get lapped" was the most common quip that Mario made.

We talked with the project's engineers on the project after the presser, and as always, got the good info. It seems that Sam has his driver's license in Nevada (although he must have someone with him in case his car control fail), and has asked the engineers for a "road rage" option. You know, basically an automated voice-activated middle finger. We were too busy laughing to remember to ask if there will be a drag race launch option as well.