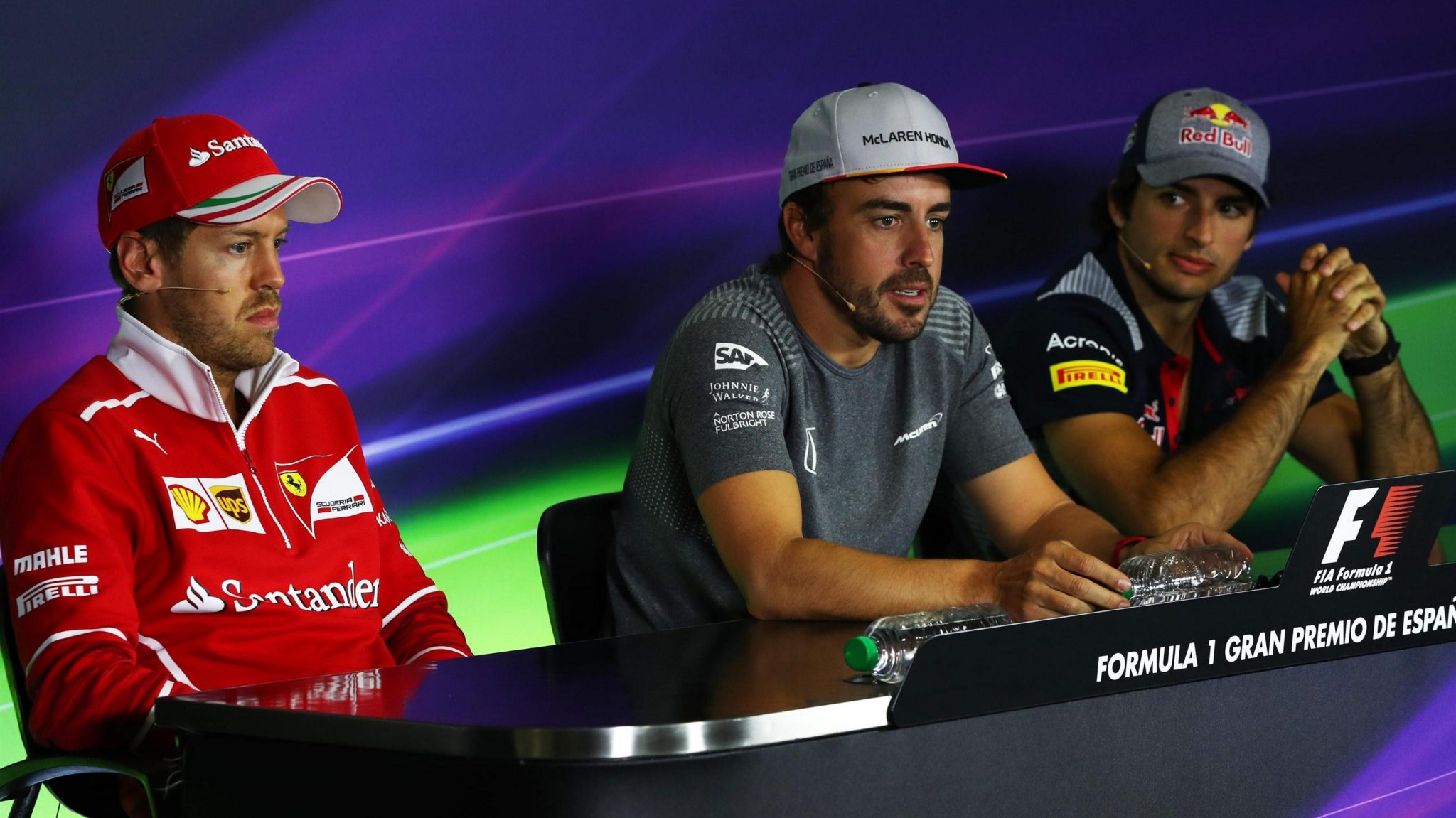 Sainz Jr. admits eye on Red Bull move
(GMM) Amid rumors Alonso, Vettel and Ricciardo could be on the move for 2018, Spanish 22-year-old Carlos Sainz Jr. could be a beneficiary of that reshuffle.

The Toro Rosso driver was almost poached by Renault this year, but Red Bull clung to his 2017 contract.

"For me it's positive if they don't want to let me go because it means they consider me," Sainz told the Spanish newspaper Diario Sport, referring to his bosses Helmut Marko and Christian Horner.

"I prefer not to talk about the future, but it's good to know that my bosses value me," he added.

The rumor in Barcelona is that Daniel Ricciardo might find his way out of his Red Bull contract for a switch to Ferrari, opening up a plum seat at the senior team.

"Obviously I don't say much but I always think these things in my head and yes, I would love to one day be fighting for victories with a team like Red Bull," said Sainz. "That is my goal."

Bottas not thinking about 2017 title

(GMM) Valtteri Bottas insists he is not letting his mind jump ahead amid his aim of winning the 2017 world championship.

After three races in 2017, some were saying the Finn was teammate Lewis Hamilton's mere 'number 2'.

But then he won in Russia, closing the points gap to his Mercedes teammate to just 10 points.

"It's been a good few months for me," Bottas told the Spanish newspaper AS.

"The contract with Mercedes, my first pole, my first victory — everything is a little surreal."

And so he said he has every intention of now continuing to win races.

"I just have to keep pushing, keep getting stronger, and hoping to get more success," said Bottas. "The feeling is very addictive."

But when asked if he is eyeing the world championship, the 27-year-old answered: "I don't want to think about the title. The season is very long."

Others, however, think Bottas has a good chance, especially amid Hamilton's struggles in Russia with the Pirelli tires.

"The window in which they work optimally has narrowed," former F1 driver Marc Surer told the German broadcaster Sky.

"Now, driving style is very important. Hamilton is someone who is always on the limit and beyond, but that can make these tires overheat faster.

"Bottas on the other hand is gentler on the rubber, so it seems to work better for him," Surer added.

(GMM) Pirelli's tires could determine the outcome of the Spanish grand prix this weekend.

While the top teams have come to Barcelona with big car upgrades, the biggest factor could in fact be the hard compounds supplied by F1's official tire supplier.

"In the winter tests we used the ultra-softs here, so I think the tires we are going to use this weekend are much too hard," said Sauber driver Pascal Wehrlein.

Mercedes' Lewis Hamilton agrees: "They are very, very hard tires. It's going to be interesting this weekend to see how they work."

For the Mercedes versus Ferrari battle, however, Pirelli's hard tires could actually work in Hamilton's favor.

Former F1 driver Marc Surer said: "The Ferrari is gentler on the tires, so they would have had a greater advantage here with softer compounds.

"With these harder selections from Pirelli, it could help Mercedes," he told the German broadcaster Sky.

(GMM) Mercedes has revealed the most striking car upgrade among its top team rivals in Barcelona.

Before the Spanish grand prix weekend, all the talk was of Red Bull and its plans for a supposed 'B' car after an uncompetitive start to 2017.

But then the RB13 was seen in the Barcelona pits looking conspicuously similar to the one that raced in Russia.

"I don't want to underestimate Red Bull, but it will probably take some time before they can catch up to us," said Mercedes' Valtteri Bottas in Spain.

Red Bull's Daniel Ricciardo agrees: "Hopefully we will be closer, but we cannot expect to go out there and win. The gap was too big for that.

"Even if the upgrade gives us a second, Mercedes and Ferrari have not sat around doing nothing.

"It's still the same car," the Australian explained. "We've changed a lot of things but don't expect too much."

Indeed, more visually impressive is the upgrade brought to Barcelona by Mercedes, featuring a radically thinner nose that had to undergo new crash testing.

But most experts doubt the car upgrades will significantly shake up the 2017 hierarchy.

"Mercedes and Ferrari are still going to be at the front, and we'll have to see how much closer Red Bull can get," he told France's RMC.

McLaren-Honda's Fernando Alonso says he is "very open" over his future beyond 2017, when his current F1 contract expires, though has reiterated that no decision will be made until at least the summer.

Alonso is in the final season of a three-year deal with McLaren, which has been characterized by a lack of reliability and performance, limiting his results.

Alonso will skip the upcoming Monaco Grand Prix in order to contest the Indianapolis 500, with an Andretti-run McLaren team, but says he is open to offers for 2018.

"Now it's a bit of a busy period, with IndyCar, so it is not the time to think," Alonso said on his future.

"If it's time to find other challenges outside Formula 1, or if Formula 1 will be an opportunity to win the championship, which is my main goal – I'm very open to anything.

"This year the cars are good to drive. Formula 1 is back in a way. I like this Formula 1.

"My intention and my first priority is to race here [in Formula 1] next year, but not just to race, also to win. I'm happy with the team [McLaren], but we are not winning.

Alonso added that he hopes this weekend's Spanish Grand Prix can be the "starting point" for McLaren's season, after a dismal opening to the campaign.

"Our moment right now is not the best," he commented.

"We've been underperforming in the first four races. We didn't finish any of the Grands Prix yet, in my case.

"The first step is to improve what we've been doing so far, which is not difficult.

"The second is to find how competitive we can be here, which is quite different to the last couple of races, plus with the updates people bring here, normally things change.

"We also need to raise our game with reliability and hopefully finish with both cars in this race.

"Hopefully this will be the starting point of a new championship for us."

McLaren and Sauber are the only two teams yet to score a point in 2017.

Felipe Massa believes Williams is "much more connected" than in previous campaigns, exuding greater confidence over its ability to develop the FW40.

Williams has emerged in the thick of the midfield fight across the opening 'flyaway' events, with the team occupying fifth place in the standings ahead of the Spanish Grand Prix.

Massa reckons Williams' prospects of remaining – or even pulling clear – of the midfield pack has been boosted by a "completely different" mentality, compared to the last three seasons.

"To be honest what I saw in this team this year is completely different to what I saw the last three years in terms of the mentality for developing," he said.

"I see the team is much more connected, working together in so many different areas, including aerodynamics.

"I believe we can have a much better development through the season compared to what I saw in the last three years.

"For sure, you need to make these things work in the car, you're only 100 per cent sure when you try in the car.

"But the mentality is definitely completely different than what's happened in the last three years, so I believe the work now is a lot more corrected [and] intelligent."

Formula 1 teams have brought substantial update packages to the Circuit de Barcelona-Catalunya but Massa has downplayed the chances of a shake-up in the pecking order.

"I really don't see this race completely different to what we saw in the last race, like a different team winning," he commented.

"I believe the fight stays still [between] Ferrari and Mercedes, for sure it's a little bit of a better track for Red Bull for example, so they can be closer.

"Many teams are bringing new parts to the car, including us, which is like different parts, aerodynamic, so a little bit on the bodywork.

"[There are] also some parts like brake ducts, upgrades in some different areas, but how good they will be is impossible to answer now."

McLaren's Alonso hit by Honda failure on FP1 outlap
No sooner did practice begin for the Spanish Grand Prix when Fernando Alonso stopped with a Honda engine failure on his outlap.

Having failed to start the Russian GP a fortnight ago, Alonso only got as far as Turn 3 in first practice on Friday morning at Barcelona.

The rear wheels of the Spaniard's McLaren-Honda locked and the car snapped sideways and around, as smoke poured out of the rear end.

Once the MCL32 stopped, fluid was seen pouring out of the bottom of the power unit. We are not sure how many engine parts blew out the hole in the engine.