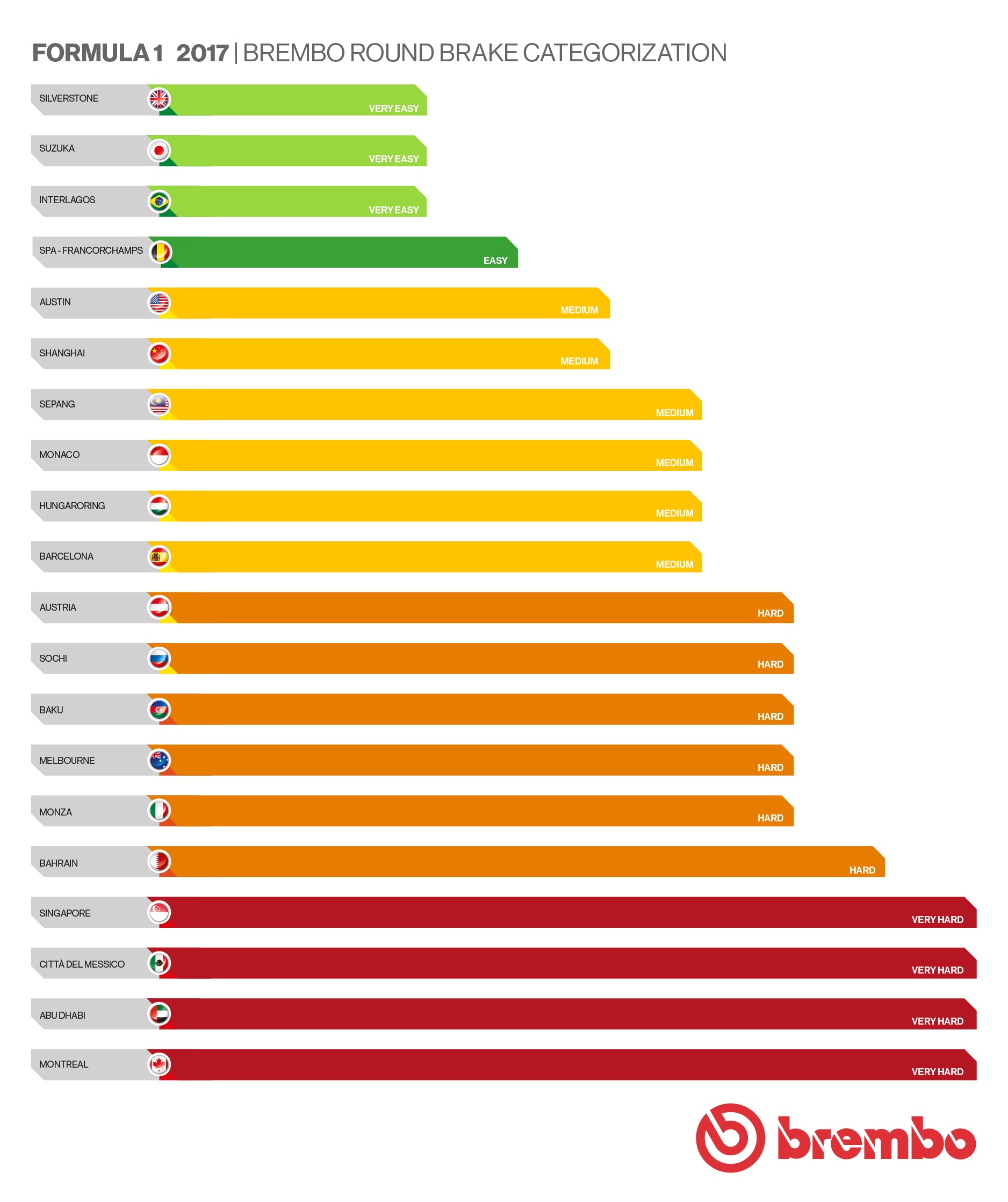 Which circuits are the toughest on the brakes? Brembo's forecast for the most challenging tracks on the 2017 Formula 1 brakes

“The straightaways are the boring bits between the corners," is a famous quote from Stirling Moss. The allure of Formula 1 comes from its corners because it's nearly impossible to find two the same. Even when the angle, the slope and the turn-in speed of the single-seaters appear similar, there are other variables that differ like the grip and the temperature of the tarmac.

All of these factors significantly influence the stress the braking systems are under. Since each circuit is a story unto itself, the Brembo technicians, who work in close contact with the top Formula 1 teams, have ranked the 20 World Championship tracks. To do the ranking, they used a scale from 1 to 10 which is directly proportional to the amount of stress the different tracks place on the brakes.

The highest score stands for a track that is Very Hard on the brakes and was assigned to the circuits in Abu Dhabi, Mexico City, Montreal and Singapore. One step below (a score of 9) was the score given to the Bahrain circuit and it represents a track that is Hard on the brakes, as does a score of 8, which was given to five other tracks: Baku, Melbourne, Monza, Spielberg and Sochi.

On the other end of the scale are the circuits that are the least stressful on the braking systems (Very Easy): Interlagos, Silverstone and Suzuka. They all scored 4, which shows that even these tracks present some sort of problem for the brakes and they shouldn't be underestimated. If we are able to define these potential problems as minor today, the credit goes to the continuous technological evolution Brembo has fostered over the course of decades.

This ranking of the tracks is a result of combining a series of numerical data measured for every single stop with certain qualitative variables that are impossible to convert into numbers. For example, using brakes in the Mexican GP, where the temperature of the tarmac reaches 122Â°F, is totally different from their use in the British GP where the air temperature doesn't go over 68Â°F.

At the Autodromo Hermanos Rodriguez, ventilation is crucial to prevent overheating the calipers and discs, which in any case operate well in temperatures of up to almost 1832Â°F. To avoid this problem, each team uses a personalized cooling system obtained through 1,400 ventilation holes in each disc.

In Silverstone, on the other hand, the single-seaters risk excessive cooling and the consequent grazing of the friction material. The carbon that the discs and pads are made of does not guarantee generating the right friction at operating temperatures that are too low, which can jeopardize the braking performance.

The number of braking sections required to complete a lap is a misleading variable for assessing the stress a system undergoes. In Montreal, the drivers use their brakes seven times per lap and in Monte Carlo they use them twelve times, in addition to the track being 0.62 miles shorter than the Canadian track. Still, the circuit on Notre Dame Island is ranked Very Hard on the brakes while the Monaco track is just Medium.

The reason is found in the numerous decisive braking sections positioned very close together on the 'stop and go' Canadian circuit, which keep the brakes from cooling down. In Monaco, the brakes are used more frequently but always for a limited time frame because the extreme winding nature of the track keeps the cars from going very fast.

So, more than the number of braking sections, the positioning of the corners makes a significant difference. Shanghai and Sakhir are identical in length (3.36 miles) and both have eight braking sections per lap, but the Bahrain GP has a lot of high-energy stopping sections that are concentrated in the central part of the track, which leads to a great deal of wear of the friction material.

In the Chinese GP, the corners that require a great deal of force on the brakes (turns 6, 11 and 14) are scattered all along the track and are interspersed with braking sections that are a lot less challenging. This set up allows the braking systems to cool down before they undergo another force.

As one might imagine when talking about Montreal, an important variable for the stress on the braking systems is the average peak deceleration experienced. Where there are plenty of violent stopping sections, like in Monza where there are four points at which the single-seaters arrive going more than 211 mph, the G-force of the deceleration is a really important factor.

In Monaco, the single-seaters never go faster than 187 mph and on the most difficult braking section, the one that follows the tunnel (turn 10), the cars are going less than 125 mph. As a result, the peak G-force hits a maximum of 4.7 G and the average is just 3.6 G.

Another variable taken into consideration is the intensity of the braking section, which is a direct consequence of the aerodynamic load, the drop in speed and the spatial and temporal duration of each stop. In Sochi and Montreal, over the course of a lap, there are a good six points in which the intensity of the braking goes beyond 2,000 kWh, reaching up to 2,435 kWh at the second corner on the Russian track.

In Monaco, the 2,000 kWh threshold is reached on just a couple of corners and the peak (2,180 kWh) is lower than three of the corners at the Canadian GP and four of the turns at the Russian GP.

As one might figure out from all of this, the braking systems on the Formula 1 single- seaters are much more complex than they seem because they have to be able to operate effectively in very different contexts. It is a great challenge for Brembo, one that transfers the experience it has gained from the highest performing single-seaters in the world to the cars that we drive on a daily basis.

Brembo, from the track to the street.