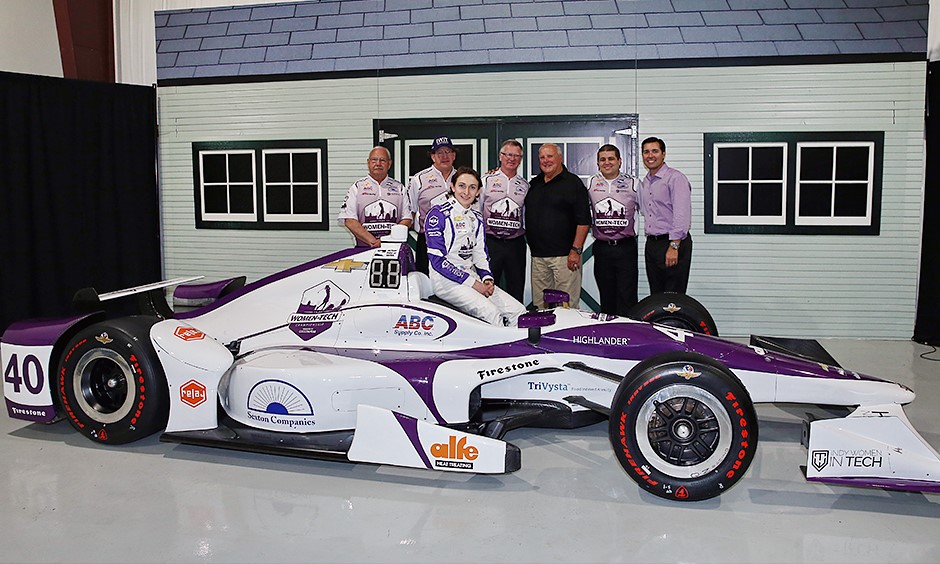 Zach Veach has many things to be excited about heading into this year’s 101st Running of the Indianapolis 500 presented by PennGrade Motor Oil.

The latest came today when the look of his No. 40 AJ Foyt Racing Chevrolet was unveiled at the team’s new shop in Speedway, Indiana, a few blocks from Indianapolis Motor Speedway. The livery features sponsorship from the Indy Women in Tech Championship, the LPGA women’s professional golf tournament that will take place on the Brickyard Crossing course adjacent to IMS, with four holes inside the track.

Veach, the 22-year-old from Stockdale, Ohio, finished 19th in his Verizon IndyCar Series debut at Barber Motorsports Park last month when he subbed for the injured JR Hildebrand with Ed Carpenter Racing. While he only has one Indy car start under his belt – and none on an oval – he feels prepared heading into his Indy 500 debut.

“I’m feeling just ready," Veach said. “I’m very excited and a little nervous, but I think that’s the perfect combination to have the motivation to go into something the way you need to."

Veach is coming off a successful year driving for Belardi Auto Racing in Indy Lights presented by Cooper Tires. He scored three wins on his way to finishing fourth in the championship of the top rung of the Mazda Road to Indy presented by Cooper Tires developmental ladder.
Veach, a veteran of 44 Indy Lights starts, will team with AJ Foyt Racing regulars Conor Daly and Carlos Munoz. While a driver’s first Indianapolis 500 can seem a daunting task, Veach is embracing the challenge.

“I just have to make sure that I go in it with an open mind, learn as much as I can through the one week of practice and into qualifying," he said. “If I can just make sure that we are there towards the end of the race and (then) go for hopefully a win or rookie of the year.
“You just have to have the right luck and the right amount of intelligence to get up to the front. If things go our way, I think we can be right there."

Veach is encouraged to be reunited Munoz. The pair were teammates at Andretti Autosport in Indy Lights in 2013 and Veach feels that familiarity will bolster his effort.

“Munoz has always been one of my favorite guys to work with," Veach said. “I’ve always felt I’m like a little brother to him and he’s been the big one. Him and his driver coach did a lot to help me progress when I was 18.

“With them, I think they are going to give me a great opportunity to learn. With Carlos, I’m not going to be much of an asset until much later in the practice week once I’m familiar with the car. I think Carlos is going to give me some great direction and put me in great equipment when I need."

Munoz, who has a solid Indy 500 record with two second-place finishes (2013, 2016) and a fourth (2014) in four starts, is also eager to work with Veach again. The 25-year-old from Bogota, Colombia said he is more than willing to help Veach throughout the month.

“In 2013, his first year in Indy Lights, I think I helped him quite a lot to get up to speed," Munoz said. “He was really competitive and he's a guy that works really hard. I think he's really talented and he showed that in Indy Lights. I believe we're going to get along really well with each other.

“I'm here to help him for what he needs, as the same my teammates did for me the first year in the Indy 500. They helped me a lot so that will be my goal, to try to help him get up to speed really quick. I think he brings a lot of good stuff and will be good for our program."

Larry Foyt, team president of AJ Foyt Racing, was struck by Veach’s fresh approach and senses that he will be an asset to the team.

“I’ve seen him in Indy Lights and watched his career coming up," said Foyt. “We did a 24-hour go-kart race together a few months ago and got to know him a little bit. When the (Indy 500) opportunity came up and the sponsorship was there, I was pretty excited about it.

“We wanted to strengthen the team as a whole and, even though he is young, he’s got a really good head on him," Foyt added. “He’s a smart driver and I think he’ll learn from the other guys and we’ll gain some data from him as well."

Veach will participate in rookie orientation testing when Indianapolis 500 practice opens May 15. The race is scheduled for May 28 and airs live at 11 a.m. ET on ABC and the Advance Auto Parts INDYCAR Radio Network. Josh Farmer/IndyCar.com