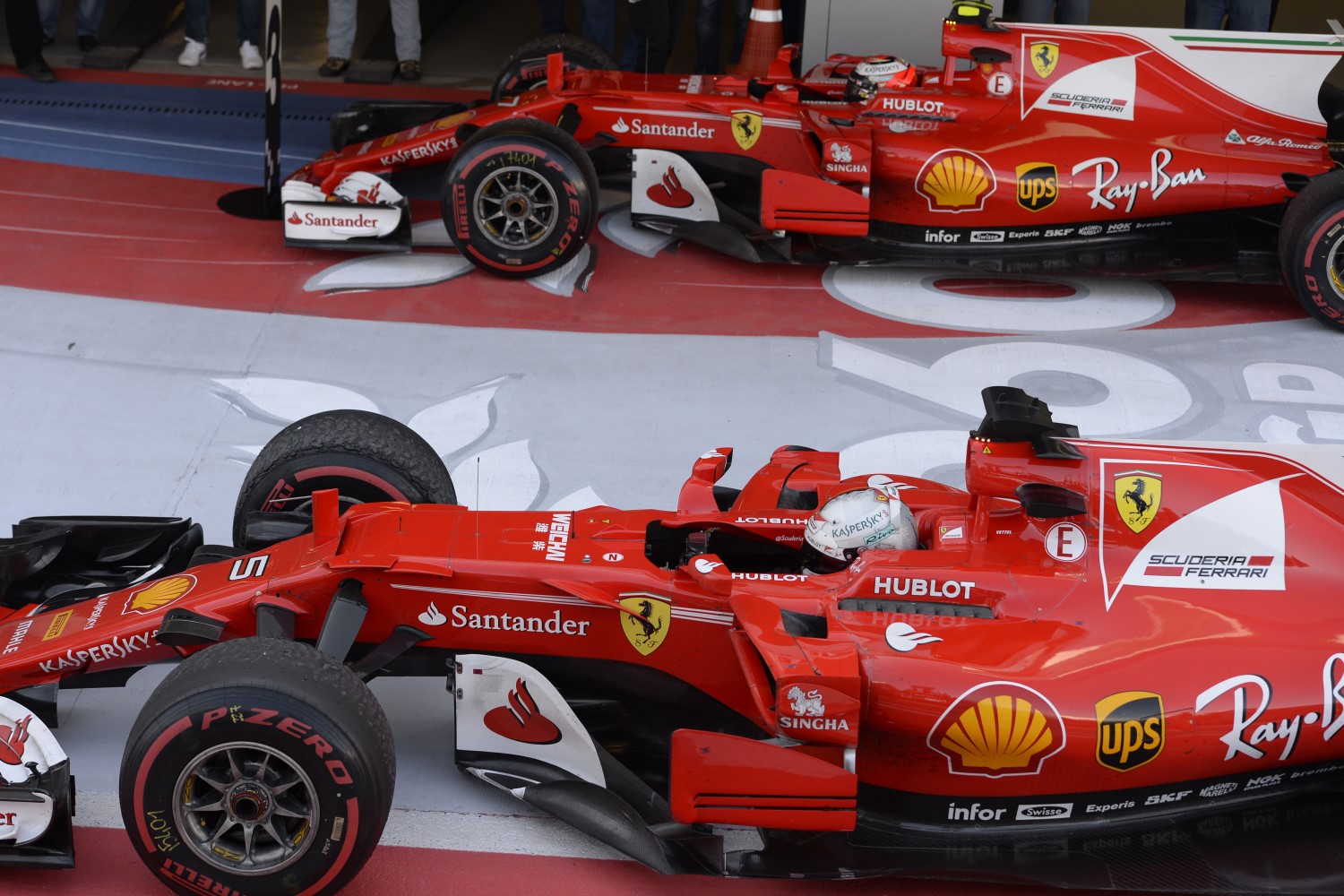 Mercedes admits Ferrari 'still ahead'
(GMM) Niki Lauda says Mercedes has work to do to catch up with Ferrari.

Although Valtteri Bottas won in Russia, Lewis Hamilton struggled and the Brackley based team thinks it is because the Ferrari is better managing the new Pirelli tires.

"Sometimes we have a car of two parts," team chairman Lauda told Germany's Auto Motor und Sport, "with a tire window at the front and another at the rear."

A team engineer said that although Hamilton struggled at Sochi, there has been progress in how Mercedes understands the tires.

"Ferrari is still ahead," the engineer said, "but we are good at understanding problems and drawing conclusions. However it could take some races before we get fully on top of it, because some of the problems are probably due to the car."

But Lauda tipped Hamilton to bounce back strongly this weekend in Barcelona, after a particularly bad show of form in Russia.

"Bottas was quicker because he won the race but Lewis is an outstanding talent, a world champion," said the F1 legend.

"Bottas beat him but perhaps the next three times maybe Lewis will do that."

Alonso defends kart track after death
(GMM) Fernando Alonso has defended his kart circuit in his native Asturias, following the death of an 11-year-old boy.

Youngster Gonzalo Basurto was killed recently in a rollover crash.

It is believed some parents of young karters have subsequently pulled out of competing at the track, amid safety fears and concerns about the crash investigation.

Alonso said: "Motor sport is never going to be risk free even though we work tirelessly to make it as safe as possible.

"I don't think we have to mix the accident or what happened here with the circuit, which is one of only four tracks in Spain approved by the FIA.

"It has more to do with the karts, which have always been put into the air when they touch wheels.

"I am open to changing anything for safety," the McLaren-Honda driver added.

(GMM) "Things are different" now that Bernie Ecclestone is no longer in charge of formula one.

That is the claim of Vicenc Aguilera, the president of the long-time Spanish grand prix host Circuit de Catalunya.

Chase Carey, who has replaced former long-time F1 supremo Ecclestone, said last week that he wants Barcelona to be on the calendar in the "long term".

"It was important that Carey gave support to our race and I got to know him," he said. "Now things are managed differently in F1 with Ross Brawn, Sean Bratches and Chase and it seems to work very well.

"I'm trying to lay the groundwork for the race to continue at the circuit for at least ten more years," said Aguilera.

He said he will also push Carey and Liberty to try to make F1 more exciting, insisting that the sport's two-wheel counterpart, MotoGP, is "more extreme".

"The races are more boring and more predictable," said Aguilera. "I asked Bernie several times to change it, but they didn't. It was a big mistake by the FIA and FOM to have a product that is so much more expensive but less attractive."

(GMM) Jenson Button may not be taking his one-off return to F1 this month "seriously enough".

That is the view of the Briton's contemporary Mark Webber, referring to the fact that Button – although newly retired – will fill in at McLaren-Honda in Monaco while Fernando Alonso is doing the Indy 500.

"When I heard that he (Button) wouldn't do the Bahrain test, I wondered if he was taking it seriously enough," Australian Webber is quoted by Speed Week.

"For me, if he's doing a triathlon in America rather than a test in Bahrain, I think first practice in Monaco will be a wake-up call for him. I just get the impression that he doesn't really care about it," the former Red Bull driver added.

But Webber said Button's return is little more than a sideshow anyway, amid McLaren-Honda's crisis and the title fight between Ferrari and Mercedes.

"He'll drive, have problems with the fuel system, qualify 16th, retire after 12 laps or whatever. What's the point? Jenson is a world champion. He has won at Monaco.

"It would be a story if he could fight for the win, but to get a point if he's lucky, that really doesn't interest anyone," Webber added.

Although the energy drink owned team will introduce a 'B' spec car in Barcelona this weekend, engine partner Renault has delayed a performance upgrade.

"The new regulations are still very immature and we will definitely get stronger," he is quoted by Speed Week.

"Obviously Ferrari and Mercedes have been better than us so far, but we've tried to keep the damage within limits. We still have our chances to catch up."

There are suggestions Red Bull's situation has left driver Daniel Ricciardo deeply frustrated, and potentially open to a switch to Ferrari for 2018.

Horner said: "I cannot see a difference between the Ricciardo now and the Daniel I know from past years. Of course he wants to be competitive but he isn't moaning. The 2015 season was much more frustrating for him.

"I am convinced that we have the most exciting driver pairing in the sport," he added.

And although Red Bull is not yet vying for wins, Horner said he is happy that the formerly-dominant Mercedes team finally has a rival in the form of Ferrari.

"It's great for the sport. Formula one has a new winner in Valtteri Bottas, we've had four races where beforehand no one could have predicted with certainty who would win. Three winners in four grands prix — may it continue," he said.

Mercedes boss Toto Wolff says he expects a season-long championship fight between his team and Ferrari, following a close start to the 2017 campaign, and has also tipped Red Bull to join the battle.

Mercedes and Ferrari have shared the first four wins of the year, Sebastian Vettel triumphing in Australia and Bahrain, Lewis Hamilton in China and Valtteri Bottas in Russia.

As it stands, Vettel holds a 13-point advantage over Hamilton in the Drivers' championship, while Mercedes leads Ferrari by a point in the Constructors' championship.

Wolff, having overseen three dominant double title-winning seasons from 2014-16, admits that Mercedes has had to "adapt to the challenge" of a multi-team contest, which he reckons will last through the year.

"This inter-team battle is a totally different situation that what we have seen over the last three years," commented Wolff.

"You simply need to adapt to the challenge and that's what we are doing, playing the hunter as well as being the hunted.

"At the moment there are two top teams fighting for both championships and I expect Red Bull will also eventually join the club.

"The small margins we are seeing are demonstrated by the closeness at the top of the Drivers' championship and even more so by the one point advantage we have in the Constructors'.

"This fight will continue on to the end of the season and we will be prepared for that battle."

Heading to the Spanish Grand Prix, Wolff is wary of Ferrari's impressive pre-season pace, and Pirelli's Soft/Medium/Hard tire selection, though remains hopeful of fighting for victory.

"Barcelona will be interesting as our pre-season was not spectacular in Spain," he said.

"It's a very different track to Sochi and we'll be running with harder tires.

"We are taking this season one race at a time. If we deliver the best possible work from Friday [practice] onwards, then we'll be ready to win and fight with Ferrari."

Formula 1 teams will bring their first sizeable update packages of the season to Barcelona, with Niki Lauda stating that Mercedes needs to take "two steps forward".