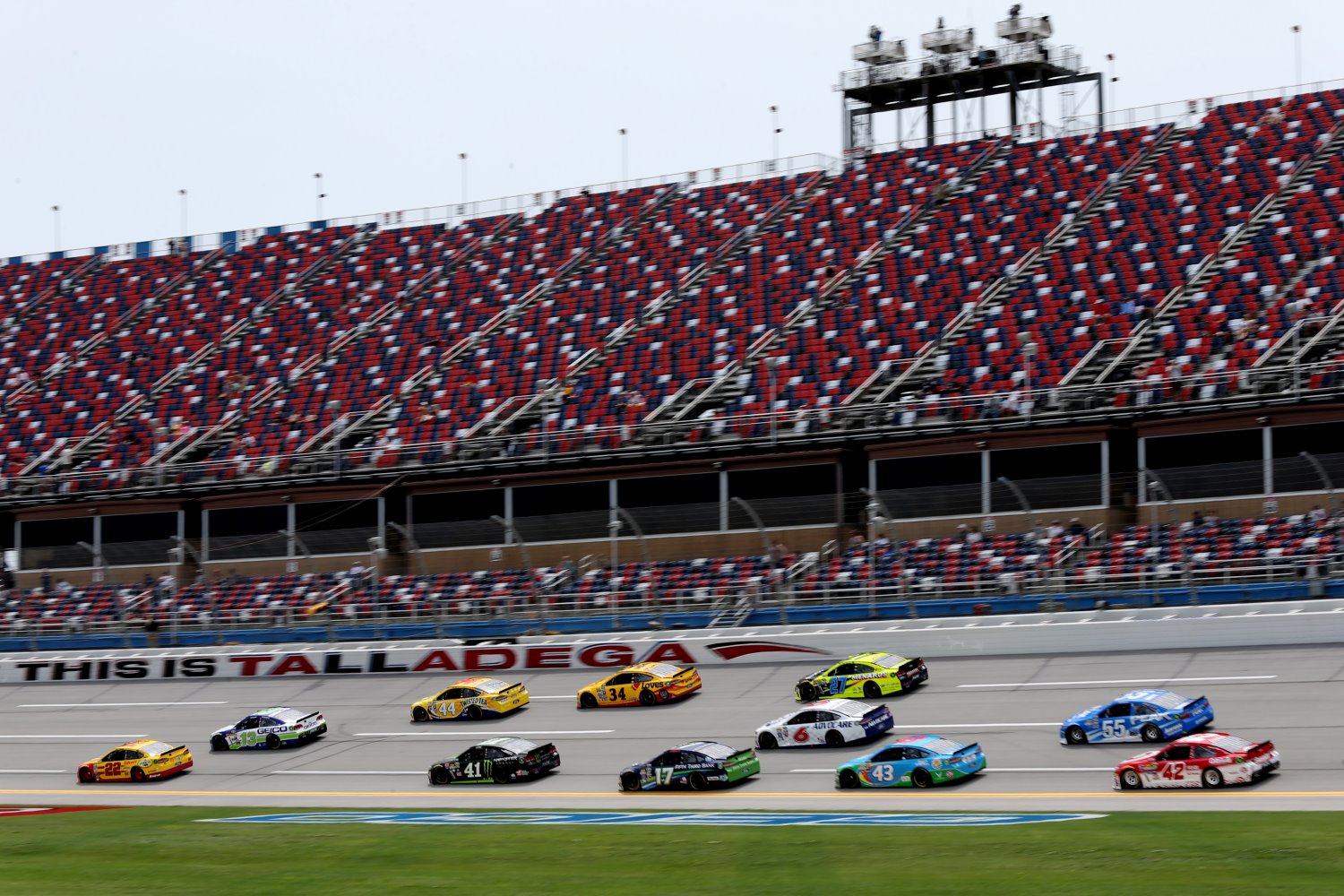 UPDATE A reader writes, Dear AR1.com, I was in the stands for qualifying a few years ago. Lots of people, maybe Â¾ full. About half way through qualifying Earnhardt makes his run. Within 15 minutes the place is empty. Still 15-18 cars to qualify! J. Miller

05/07/17 There is a tradition in the grandstand at Talladega Superspeedway when Dale Earnhardt Jr. is leading the race on Sunday.

Some fans of the driver chug beers every time Junior leads a lap. Bud Heavy for the real fans, I assume, and Bud Lite for everyone else. I've been in the grandstand at Talladega for one race in my life, and I can't remember it.

Call that a testimonial.

The majority of fans at Talladega every year support Junior. He inherited many of them from his father, and picked up more throughout his career. Daddy Earnhardt won at Talladega 10 times, and Junior has won at the big tri-oval six more. In other words, it's kind of been the responsibility of the Earnhardts through the years to make sure everyone at Talladega is well oiled and having a good time.

Last week, Earnhardt Jr. announced his retirement from the sport, and the news rocked the auto racing world. Perhaps nowhere else was it felt more deeply than here. Sunday's running of the Geico 500 will be more like a tribute to a living legend. Ticket prices have skyrocketed.

Earnhardt is worshipped at Talladega. Perhaps no driver is more associated with a track. One columnist once called him "Redneck Jesus."

Where is this sport headed without Earnhardt Jr.? What will Talladega be like in the future without a Earnhardt running out front? These are serious questions. All I know is it will be a little soberer, and a little less fun.

The Alabama Gang and their good buddy Earnhardt Sr. once helped build Talladega, and then turned a regional curiosity into a national spectacle. Junior became the face of stock car racing after his father died, and has won 14 consecutive NASCAR Most Popular Driver Awards. In a sport where sponsors pay the bills, that means everything.

"It seems like we have a ton of fans in this area," Junior deadpanned on Friday when asked about his legions of fans in Alabama.

Growing up, one of those fans was Bret Holmes. A young driver, Holmes is the first stock car racer from Talladega County to run in the ARCA Series, according to his team and the superspeedway. The ARCA General Tire 200 was scheduled for Friday evening, but was cancelled due to rain. Talladega Superspeedway rescheduled the race for 5:13 p.m. on Saturday.

Holmes' 20th birthday was on Friday, so a strong showing in the General Tire 200 would have been a nice present. A victory at his home track a day later would be even sweeter. Just two years ago, Holmes was in the grandstand at Talladega experiencing the thrill of the superspeedway from the Junior Nation perspective.

"The Earnhardts success here just made this place what it is," Holmes said. "Fans want to see [Junior] lead every lap. Like, he'll lead one lap and he may drop to 10th the next lap, and they'll get up and scream and hoot and holler and chug a beer."

In a sport like no other, Talladega is a track all its own. Next year all those fans of Earnhardt Jr. will be screaming for someone else. Or at least that's what NASCAR and the Talladega Superspeedway are hoping will happen. Who will lead the chorus in song?

Many within the sport are hoping Chase Elliott, who is 21 years old, will rise in popularity this season. Elliott's father, Bill, was voted NASCAR's Most Popular Driver 16 years in a row. "Wild Bill" Elliott overflowed with charisma, and Earnhardt Sr. exuded working-class grit. Earnhardt Jr. was a guy you could drink a beer with.

Who knows how he will craft his image, but some say that's exactly NASCAR's problem. It's too polished and corporate, and when NASCAR traded rednecks for greenbacks a long time ago it lost part of its soul in the process.

Junior knew how to tap into that soul better than anyone. He learned it from his father.

"The first time I really went deer hunting was with my father in Alabama," Earnhardt said on Friday. "Used to have a lot of friends down here. Everybody has kind of growed up and moved out…I always loved coming here as a kid because this is such a fun racetrack to be at."

Earnhardt Jr., at 42 years old, is retiring from NASCAR after missing half of last season due to lingering symptoms from a concussion. He's had too many over the years, and he knows what happens in this sport when you stay around too long.

No one will fault him for retiring, and on Sunday everyone will salute him. When he comes around turn four in the lead, and the crowd explodes with that collective Southern yell, there might be more tears than beers.