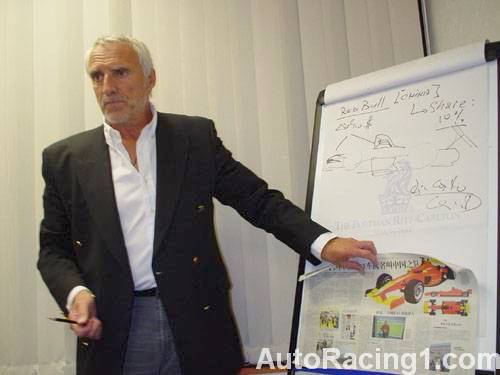 AutoRacing1.com spy cameras snapped this photo on November 8th in the Shanghai, China Ritz Carlton of Red Bull billionaire Dietrich Mateschitz making a presentation to Guo Jie, one of the richest people in China, and the Red Bull distributor there. Take a look at the notes on the board, which appear to indicate that Red Bull is going to leverage the USA and China markets with F1. Red Bull is already developing Chinese drivers with Red Bull Team Meritus. Marchy Lee is the best Red Bull has over here but don’t count on him ever going anywhere. He’s a stiff, too old, too weird, too cocky, Chinese girls don’t like him, an almost certain career killer in China. Mark C.