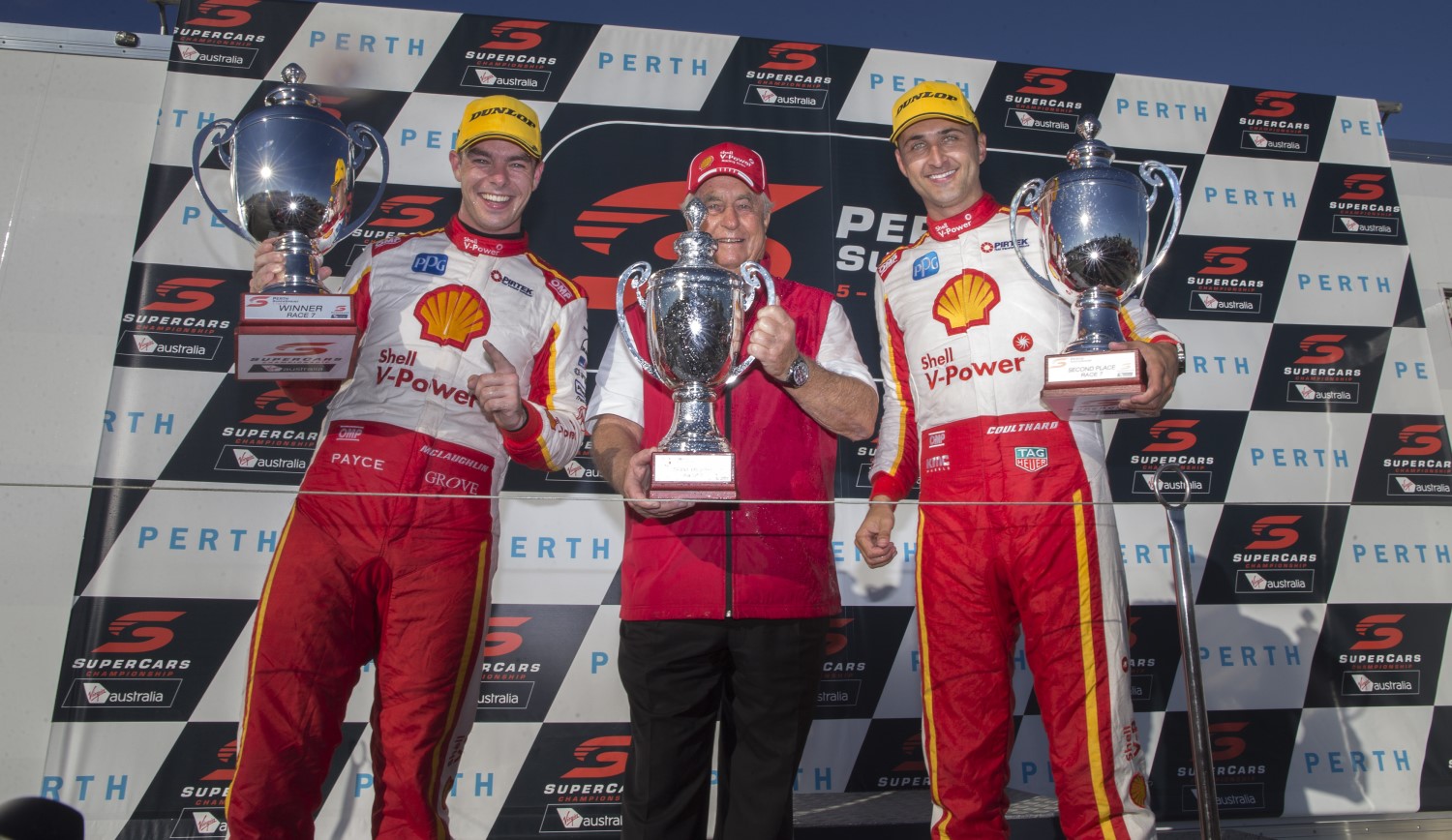 Scott McLaughlin has claimed his first official race victory of the 2017 Virgin Australian Supercars Championship in race one of the Perth SuperSprint this afternoon.

McLaughlin led from start to finish to cross the line first in front of Shell V-Power Ford teammate Fabian Coulthard.

The 1-2 finished brought much delight to the duo's team owners, Dick Johnson and international motorsport legend Roger Penske, who both watched on from the team's garage. Penske, who met with Federal Minister for Foreign Affairs Julie Bishop on the grid before the race, even joined his drivers on the podium to celebrate their dominant victory.

"It's the coolest thing I have done for a long time," McLaughlin said.

A critical part of the race was when McLaughlin entered pit lane and re-entered the race just meters in front of Coulthard. McLaughlin said it was in fact a miscommunication with his engineer, Ludo Lacroix, that made him pit before his team had planned.

"We had radio dramas so it was hard for me to hear him. I thought he said pit but he said push apparently," McLaughlin said.

Whincup said his Red Bull team has work to do to maintain it's supremacy now the Ford drivers have taken the championship lead.

"Everyone complained that we were at the front of the pack and it was no good for the sport," Whincup said.

"So just going to be a challenge for us to make our car quicker and fight on for the rest of the year. That's what it's all about.

"You can't stay on top forever."

McLaughlin led from start to finish in the 120km race. After beginning the race from second position, he had the perfect start which moved him past Coulthard who claimed pole position in qualifying. From there, the Shell Ford duo were never troubled and sped away from the rest of the field.

The race win was McLaughlin's second at Barbagallo Raceway following his 2014 victory in a Volvo with Garry Rogers Motorsport. It was also his first official race win in a Shell Ford Falcon with his victory at the Australian Grand Prix coming in a non-championship race.

The victory keeps McLaughlin in fifth on the championship ladder behind Coulthard who today extended his narrow lead in top spot in front of the second placed van Gisbergen.

Drivers will now gear up for a qualifying session tomorrow morning ahead of a 200km race tomorrow afternoon at 2:15pm WST (4:15pm AEST) where the 2017 Perth SuperSprint champion will be crowned.

RECAP: Coulthard had a day of excellent pace in all sessions, from final practice to his first championship pole for 2017 in qualifying. In the race he was equally quick as his teammate McLaughlin, but managed his tires and the gap back to third place man Jamie Whincup to secure a fantastic 1-2 result for the team.

QUOTE: "I'm so stoked for Scott – it's great for him to get his first win for the team. We had great pace, and the team has given us seriously good cars this weekend. The tire life was fantastic, they hung onto them well. It's pretty special to have Roger up on the podium with us as well, I'll remember that for a long time."

RECAP: McLaughlin was up front on pace all day, topping practice before running second to teammate Coulthard in Qualifying. He got a sensational start to jump Coulthard off the line, and then they raced together to build a massive gap back to the rest of the field. It was a dominant display by the No.17 Shell V-Power Ford driver, taking his first championship win for DJR Team Penske in the process.

QUOTE: "That was awesome – I got every element of that race right. I got a great start, and put all the pieces together. I'm so happy to get my first win for the team. Fabs has got a couple, and I'm stoked to get one myself now, especially with Roger here. Our car pace was incredible, and the tire life was good too. What a day!"