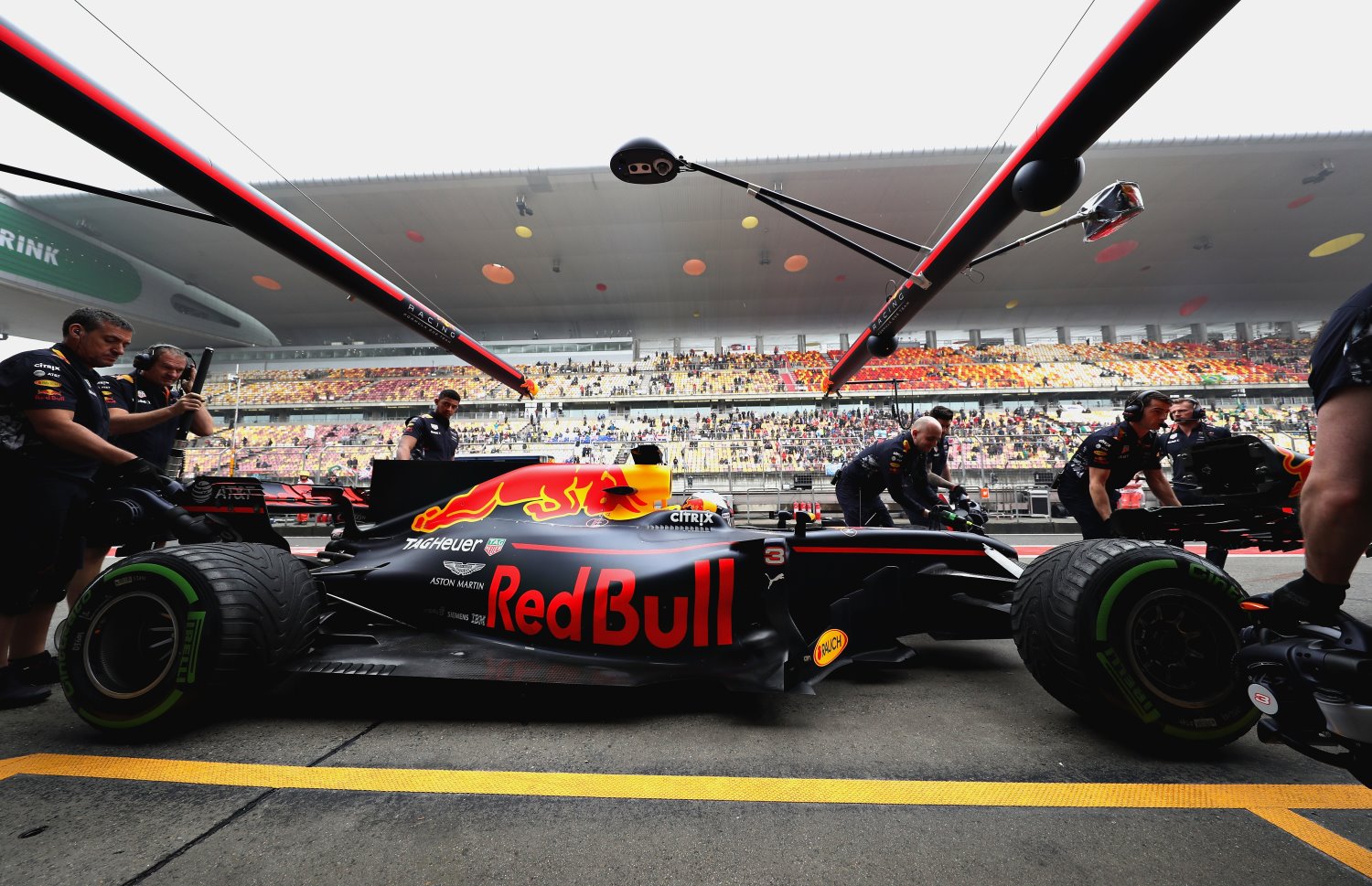 With the struggling former champions preparing a 'B' car for Barcelona, it was said Red Bull could join the fight at the front by June also thanks to a Renault engine upgrade.

But we reported this week that the upgrade has been postponed "indefinitely" for reliability reasons.

Helmut Marko, a top Red Bull official, confirmed: "As long as Renault does not have reliability under control, there is no further development.

"This is a setback for us," he told Auto Motor und Sport.

At the same time, rumors are swirling that Renault is actually accelerating development on a single car — the works machine raced by Nico Hulkenberg.

"The fuel may be different but the hardware is the same, Renault assures us," said Marko. "It would be impossible to build two different engines anyway.

So for now, Red Bull is putting its eggs in the 'B car' basket, with simulations promising a huge step forward of a full second per lap.

"We know all the numbers but now I want to see it on the stopwatch in Barcelona," Marko said.

Ferrari move 'not in my head' – Ricciardo

(GMM) Daniel Ricciardo has played down reports linking him with a move to Ferrari.

It is not the first time the Australian has been mentioned in connection with the fabled Italian team, but Red Bull consistently reports that it has the 27-year-old under contract for the next two years.

And Osterreich newspaper quotes Ricciardo as saying: "Definitely I want to be in the fastest car if possible, but there's nothing in my head at the moment."

However, he does admit that Red Bull is currently not in pacesetters Ferrari and Mercedes' league.

"At the moment we are not in the fight for the world title," Ricciardo said.

But the premier energy drink-owned team is preparing a major step forward with a 'B' car for the next race in Barcelona, said to be a full second per lap faster.

"If we are strong in Barcelona, it could be the turning point," Ricciardo said.

(GMM) Former F1 supremo Bernie Ecclestone says the best thing about the sport's new era is that there is finally a fight at the front.

Invited as a guest of the respective promoters, despite only now having a hands-off role, the 86-year-old was present in both Bahrain and Russia recently.

He credits the success of the Sochi race to controversial Russian president Vladimir Putin.

"I remember when I first came here and I was discouraged," the Izestia news agency quotes Ecclestone as saying.

"I was not completely sure Russia would be able to build such a great track, but I relaxed after the guarantees given to me by Vladimir Putin. I know that your president only takes informed decisions," he added.

"He will be remembered as a great president, who does a lot for his country and for world peace," Ecclestone said.

He said he is sure Sochi will stay on the calendar beyond its 2025 contract, but confirmed reports that talks about a night race have now ended.

"We had the idea but I don't know if it's worth it. The TV pictures from Sochi in the afternoon are wonderful and everything is organized at a very high level, so there's no need to change," said Ecclestone.

Finally, Ecclestone spoke about the 2017 season, in which changes he presided over last year came into fruition in the form of the current, faster cars.

And at the front, Mercedes finally has a challenger in Ferrari.

"I think Sebastian (Vettel) and Lewis (Hamilton) will continue to fight for first place," said Ecclestone. "It will be a very interesting fight.

"This year, Ferrari is really back in the fight for the top places, and that's very good news. Fans were very tired of Mercedes' domination of recent years, and increased competition helps the promoters to sell more tickets," he added.

Hamilton thinks 'nothing' about Rosberg

Asked what he thinks of the German today, Hamilton is quoted by Italy's La Gazzetta dello Sport: "Nothing.

"We were teammates, we worked together for a few years and now he's retired. I wish him the best," Hamilton added.

"Last year I lost the title, but I beat him on the number of wins. I was proud because I didn't give up until the end, like always."

Vettel: 'Nothing for granted' despite title lead

Championship leader Sebastian Vettel says there are "lots of positives" for Ferrari to take from the opening sequence of Formula 1 races in 2017 but has stressed that it can take "nothing for granted".

Vettel claimed victories in Australia and Bahrain, backed up by second-place finishes in China and Russia, having also ended his and Ferrari's pole drought last weekend.

The results have enabled Vettel to hold a 13-point lead over Mercedes rival Lewis Hamilton but Vettel has emphasized that Ferrari cannot afford to relax as the sport prepares for the European phase of the season.

"I think we've had a very good start," Vettel said after finishing runner-up to Valtteri Bottas in Russia.

"If we look back I think we have more or less extracted the maximum.

"So I'm very happy with where we are as a team – but we can still learn and we can still improve and I think that's the way we go forward.

"Nothing is for granted, Barcelona is just another race and we have a lot of races to go this year. But before that we have two weeks' time to look at what we have done so far and improve.

"I'm generally looking forward: we have a strong car, a strong team, the spirit is good, so lots of positives."

Vettel is also hopeful that Red Bull can join the battle between Mercedes and Ferrari, with his former team having emerged as third-best this year, adrift of the leading duo.

Max Verstappen finished fifth in Russia, a minute behind Bottas, but Red Bull is set to introduce a heavily-revised chassis in Spain, prior to upgrades from power unit supplier Renault in Canada.

"I think it will be a very close race between Mercedes and us, I hope, and I also hope that Red Bull find some pace," Vettel added.

"There's a lot of rumors around.

"They are a strong team, they know how to build a quick car so I expect it's a question of when, rather than if, but the sooner [Red Bull improves], the more exciting it will be for us."

Williams chief Paddy Lowe believes Lance Stroll's spin on the opening lap of the Russian Grand Prix cost the team the chance to capture its first double points finish of the year.

Rookie Stroll moved forward at the start, joining team-mate Felipe Massa inside the top 10, but spun at Turn 5, the mistake dropping him to the back of the field.

Stroll recovered to 11th place, six seconds behind Carlos Sainz Jr. at the checkered flag, and Lowe feels the Canadian's error denied him a shot at his maiden points finish.

"He had an unfortunate spin very early on, but drove a good, solid race after that and narrowly missed out on the points," said Lowe.

"Without the spin he could have certainly been in the points, but he put in some pace when he needed to and gained a position through the pit-stops, and it's great that he's got his first race finish of his career."

Massa, meanwhile, occupied sixth spot but dropped to ninth with an unscheduled second stop, caused by a slow puncture, the second to affect the Brazilian during the race.

"Felipe drove a fantastic race, but we had two slow punctures on his car," Lowe explained.

"The first one wasn't too damaging because it came at a reasonable time for a one-stop strategy.

"But the second one took him well out of position to ninth, which is a much worse result than the sixth place he was on for

"Overall we're disappointed, we need to understand the reasons for the punctures as there may be more to it than bad luck."