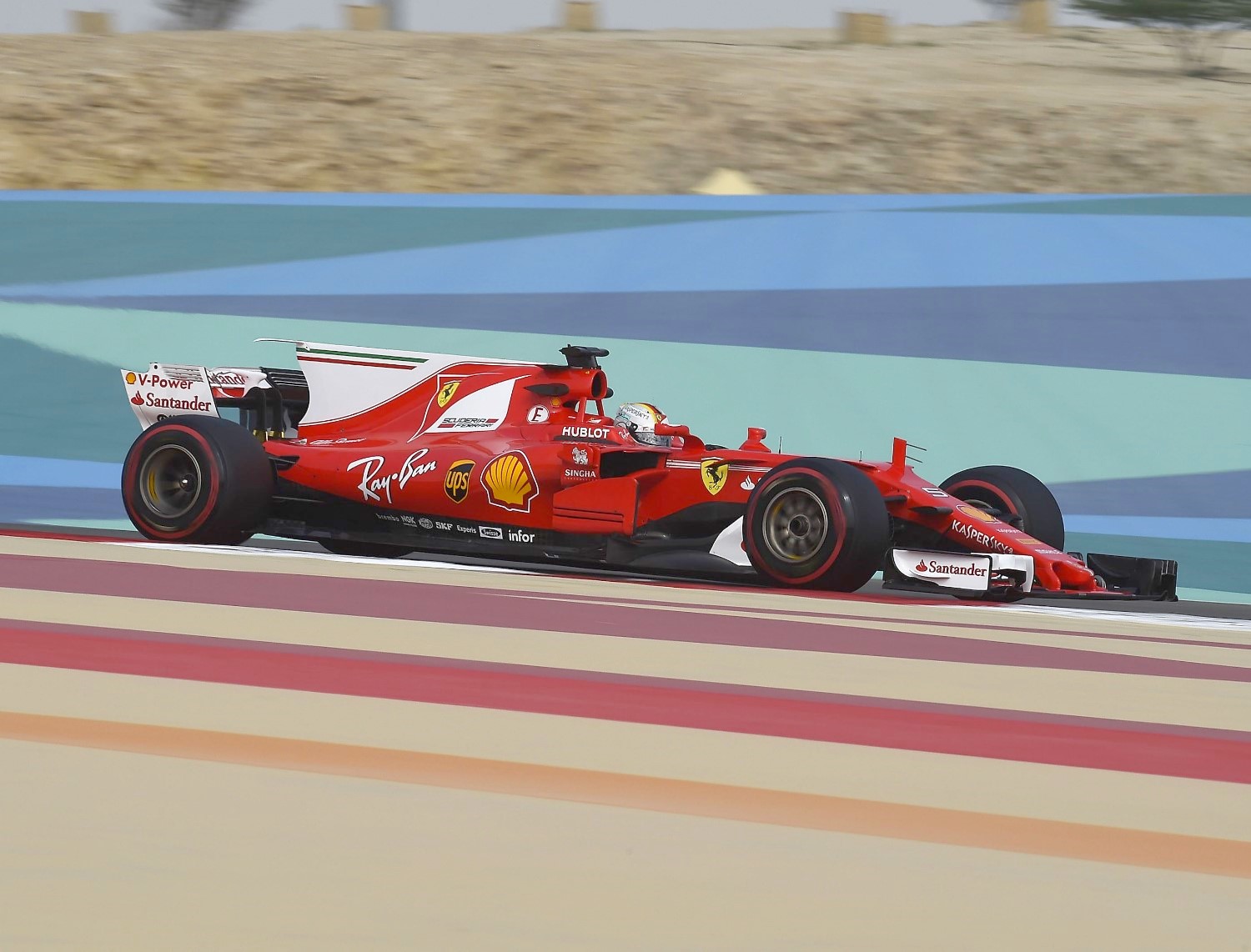 That is the claim of multiple authoritative media sources, including Germany's Auto Motor und Sport and the DPA news agency, and Italy's La Gazzetta dello Sport.

The appendages are unpopular for aesthetic reasons, and some 'T-wings' suffered notable on-track failures recently.

The FIA confirmed after the Paris meeting on Tuesday that from 2018 "designs incorporating the 'T-wing and 'shark fin' will be strictly limited".

It also emerges that the controversial cockpit protection system 'Halo' has been ruled out, with "priority" to now be given to the development of the transparent so-called 'Shield'.

"The FIA aims to carry out track tests of this system during this season in preparation for implementation in 2018," said the governing body.

And finally, teams have been told to improve the visibility of driver numbers and names on the cars, effective from next month's Spanish grand prix.

(GMM) Sochi will not be the only Friday practice outing in 2017 for Renault reserve driver Sergey Sirotkin.

It has been announced that the 21-year-old, part of the driver program for the Russian team sponsor SMP, will take over Nico Hulkenberg's car on Friday in Russia.

"We have several Friday practices planned for Sergey for the course of the season," a SMP Racing spokesperson told Sportbox.

"We already know how many, but I cannot tell you."

Sirotkin has already declared that his goal is to step up to a full race seat at Renault for 2018.

Although just 21, the former GP2 driver has been linked with an F1 debut for several years, including a near race seat at Sauber some time ago.

"Something can always go better, but somehow life is moving in the right direction," Sirotkin said.

"It's stupid to complain, especially as this year I have taken a step closer to my goal."

Vettel to use 'racing socks' from Russia

(GMM) Sebastian Vettel will begin using racing 'socks' rather than traditional boots this weekend in Russia.

But it has only just been homologated by the FIA.

"Auto Bild's information is that Vettel can finally use his racing sock from Russia," the German publication declared.

A Puma spokesman said of the 135 gram 'sock': "We have tried to reduce a racing shoe to the minimum.

"This is the first sports shoe using fire-resistant thread for racing."

The spokesman said German Vettel was central to the development of the racing sock.

"The feedback of the driver is the most important part, as we want to give him what he wants. We have succeeded in that," he added.

(GMM) Bernie Ecclestone has lobbed an apparent threat in the direction of F1's new regime.

The sport's long-time supremo was ousted amid the recent takeover by Liberty, replaced by new CEO Chase Carey and deputy chiefs Ross Brawn and Sean Bratches.

86-year-old Ecclestone, in turn, was given the largely honorary role of 'chairman emeritus'.

"I said the trouble with all sort of animals is if you want to kill them, you have to kill them — don't wound them," Ecclestone has told the BBC motoring program Top Gear.

Asked by interviewer Eddie Jordan if that is a "little message" to Liberty about his disempowered role, he answered: "It depends how people want to take meanings, doesn't it?"

As for his new role as chairman emeritus, billionaire Ecclestone continued: "I don't know. It's a little bit like giving a hit man a gun and no bullets.

"But I've got enough money to buy the bullets."

(GMM) Toto Wolff has admitted the end of Mercedes' utter dominance is good for the sport.

Throughout the 'power unit' era to date, Mercedes won every title on offer and almost completely monopolized the top step of the podium.

But in 2017 so far, Mercedes has been defeated two out of three times by Ferrari.

"It was not always good for formula one. That's why many fans are now looking forward to a great world championship."

On the other hand, Wolff says Mercedes is enjoying the new, calmer relationship between its drivers.

"Before, for three years we had to consider how to manage Rosberg and Hamilton, but that problem is now gone," said the Austrian.

But Wolff did have to upset Nico Rosberg's successor Valtteri Bottas in Bahrain by ordering him aside for the faster Lewis Hamilton.

"That never feels good. But the question we had to ask was 'Do we want to lose the race?'

"Valtteri simply didn't have the tires under control, so we had to put Lewis ahead," he said.

Kvyat admits 'not friends' with Sainz

(GMM) Daniil Kvyat has admitted he is not friends with his Toro Rosso teammate Carlos Sainz.

As ever at the junior Red Bull team, the pressure on the drivers is high.

While Spaniard Sainz is pushing hard to impress and earn a more competitive seat for 2018, Russian Kvyat is still emerging from his crisis of 2016 when he lost his plum role at Red Bull.

"We communicate well and treat each other with respect," he said. "But on the track we fight to the end.

"It has not reached a point to be able to say that we have a problem, and I hope this will not happen. But everything is possible.

"Hopefully we will not cross that line," Kvyat added.

Wolff encouraged by progress of juniors

Mercedes boss Toto Wolff has praised the progress made by youngsters Pascal Wehrlein and Esteban Ocon in Formula 1 this season, believing both are on the right path.

Wehrlein and Ocon, long-term members of Mercedes' young driver program, both changed teams over the winter, with the former Manor duo moving to Sauber and Force India respectively.

Wehrlein missed the opening two races of the season due to a lack of fitness, arising from the back injury he sustained at the Race of Champions, but returned in Bahrain, qualifying 13th and racing to 11th.

Ocon, meanwhile has placed 10th across the opening three rounds of the season, ensuring he has collected points from each event.

"I'm delighted for Pascal and for how he bounced back in Bahrain," said Wolff.

"He's still not completely pain free but, considering that fact, he had a brilliant weekend.

"He had a great qualifying and a really solid race. It's just a matter of time until he scores his first points for Sauber.

"I'm very happy about that. He's proven all of the critics wrong.

"As for Esteban, he has a very strong teammate in Sergio Perez to benchmark himself against and that is exactly what he's doing at the moment. He's on the right trajectory."

Mercedes heads to Russia this weekend having never been beaten at the Sochi Autodrom, with Lewis Hamilton (in 2014/15) and Nico Rosberg (in 2016) claiming victories.

Wolff, though, has stressed that Mercedes' previous form at Sochi is no indicator that it will act as the benchmark this year, having been overhauled in race trim twice by Ferrari so far in 2017.

"It's a totally different kind of track this weekend in Sochi [to Sakhir] and, in this season with these new regulations, you can't take anything for granted.

"The trophies of previous years don't guarantee that we'll be winning in Russia when you have a very fierce competitor like we do in Ferrari.

"We'll take it one step at a time, start the weekend well and hopefully have a good result on Sunday."

Wolff: It feels sh*t right now!
After three years of heading a team that totally dominated Formula 1, Mercedes chief Toto Wolff admits that losing to Ferrari in two of the three races so far this season has been a bitter pill to swallow.

Speaking about the state of play, Wolff told Racer, "Losing feels much worse than winning feels great – unfortunately that is at the moment it feels really wrong. Bouncing back and winning feels even better, and we have enjoyed winning in China, a lot, and in hindsight it's a good motivation as well."

"And probably for Formula 1 it's good as well if there's a fight between Ferrari and Mercedes, so we have to see it like sportsmen – we have a fight that's on and that is how it is, even though it feels sh*t right now!"

"It's a different situation. In the last three years we had an internal fight – of course you set your mindset in that direction – and this is a new situation which I'm sure the team will handle well."

Despite Ferrari taking the fight to them, Wolff insists that the relationship with the Reds is healthy, "[The relationship] doesn't change. We're getting on well with Ferrari, there's great respect between the two teams and between the two brands. I'm getting along with [Sergio] Marchionne very well as well as [Maurizio] Arrivabene and [Mattia] Binotto."

"It doesn't change anything, we have great respect for the humans, and they've done a good job which we have to admit. I'd rather have our mindset or philosophy similar to what you have in rugby – it's hard, fierce competitors, and trying to beat each other but we are able to drink a beer afterwards," added the Mercedes boss.