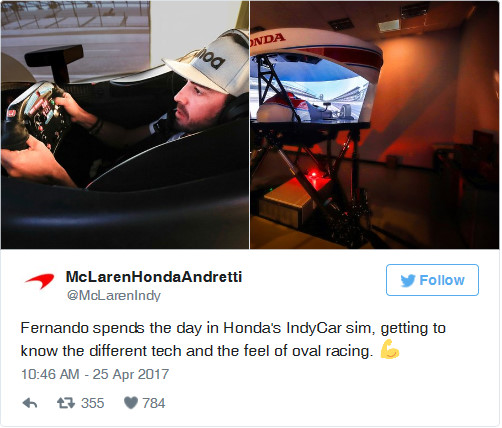 Fernando Alonso has more than just a new track and a new car to learn as he prepares to compete in the 101st Indianapolis 500 presented by PennGrade Motor Oil next month. He also faces a new approach to racing his teammates.

In Formula One, a teammate is as much an opponent as an ally. One need look no further than the ferocious battles between Lewis Hamilton and his Mercedes teammate Nico Rosberg during the past three years.

Fernando AlonsoPart of the reason behind that is numbers. In Formula One, teams are generally two-car operations. In INDYCAR, the top teams have four cars; for Indy, they’ll field five or even six. Instead of one teammate, Alonso will have five at Indianapolis. If one of Andretti Autosport’s drivers is in contention to win late in the race, the others likely will be called upon to help, not pursue.

One of Alonso’s teammates in May, Alexander Rossi, experienced it firsthand last year. Rossi relied on teammates Ryan Hunter-Reay and Townsend Bell to tow him around the Indianapolis Motor Speedway oval in the closing laps so that he could save every drop of ethanol possible to coast across the finish line and win the 100th Indianapolis 500.

“What is different is how we race on the track," Alonso said Saturday during an interview before the Honda Indy Grand Prix of Alabama presented by America’s First. “(In Formula One,) we don’t see our teammate in the first corner after the start different than any other driver. We consider him as an opponent. … When we are on the track in Formula One, there is no help for each other. Here, if anyone needs anything in the last 10 laps of the race and you have no options to win the race, you try to help your teammate win it. That’s something that is very good."

Here’s something else that is very good (and also unlike his F1 experiences): Alonso’s teammates aren’t the only ones offering friendly advice.

“It's all very different from what he's used to, and I think it's impossible to try and forecast how he's going to adapt," said Team Penske’s Josef Newgarden, who won Sunday’s race at Barber Motorsports Park. “Some guys adapt extremely quickly and it's like they've been doing it their whole lives, and other guys, they struggle for a while, and some never get it, some never figure it out, and they just don't like it at all and they don't want to do it.

“I think it's impossible to say," Newgarden continued. “I think Alonso has proved in his career he's a very adaptive driver. He understands how to figure a situation out and then apply the techniques that are needed for each given situation. I think he'll respond really well."

That’s the interesting part of Alonso’s experiment. Not only are his teammates – Hunter-Reay, Rossi, Marco Andretti, Takuma Sato and Jack Harvey – thrilled that the two-time F1 champion is on board for Indy, Alonso’s opponents are thrilled, too.

“I think it's very courageous," said Simon Pagenaud, the defending Verizon IndyCar Series champion. “It's going to be exciting, I think, even for us just to see how he does, and he's going to bring an incredible following from Europe, from Spain. … It's fantastic for INDYCAR. It's a new era, I think. It really is going to help us grow even more. We're obviously growing very well right now, but this is going to be a big boost. Super exciting. I just wish Hamilton and (Sebastian) Vettel were coming, as well. Hopefully that will happen someday soon."

One-offs by drivers from other series are a welcome tradition at Indianapolis. Most recently, NASCAR driver Kurt Busch impressed with a sixth-place finish with Andretti Autosport in 2014. Many are comparing Alonso’s attempt with F1 star Nigel Mansell’s third-place finish at Indy in 1993. While it wasn’t a one-off – Mansell went on to win the Indy car championship under CART sanction that season – it was a media spectacle turned legend.

“(Alonso’s effort) is going to open a lot of doors for a lot of different people in the future," said Scott Dixon, the four-time Verizon IndyCar Series champion who won the Indy 500 in 2008. “But it also opens up different series owners’ eyes that it’s not something that we only used to talk about in the 1960s, ‘70s and ‘80s."

As his historic attempt got underway Saturday with a news conference, interviews, an appearance in the NBCSN booth during the race and meetings with teammates and competitors in the paddock, Alonso vowed to enjoy the experience.

“This race is so unique and so big that to experience those emotions and to drive in that place, that day, is something that everyone is telling me to enjoy," he said. “Because everything happens so quickly; that you are so focused on the race, that you tend to forget what you are doing and where are you in that moment. So, I'm ready to enjoy everything that I live on that day."

Alonso was at the Andretti shop Monday to be fitted for his Indy car seat. He is “turning laps" today in the Honda simulator (see tweet below) before heading off to compete in the F1 Russian Grand Prix this weekend.

Alonso will be back in Indianapolis to participate in a one-day test at Indianapolis Motor Speedway on May 3. Scheduled from 9 a.m.-5 p.m. ET, fans are invited to watch from the Turn 2 infield mounds, the IMS Museum parking lot or the South Terrace grandstands.

Ticket information for the 101st Indianapolis 500 on May 28 and the INDYCAR Grand Prix on May 13 on the IMS road course is available at IMS.com. Jeff Olson/IndyCar