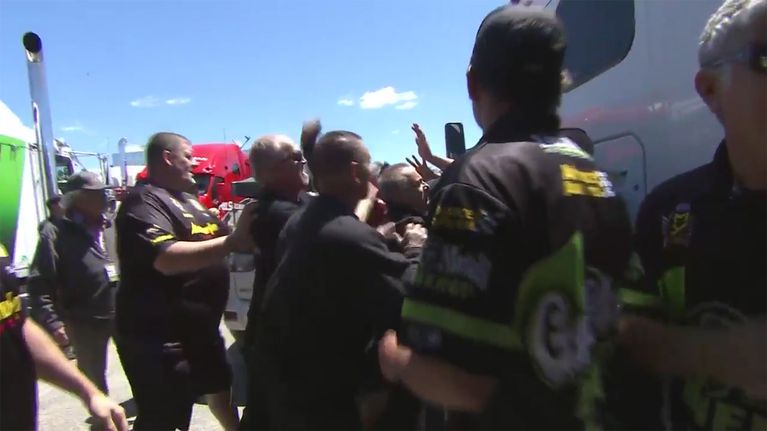 The crews for NHRA Pro Stock competitors Tanner Gray and Alex Laughlin traded blows following Round 1 of final eliminations at the Royal Purple Raceway in Baytown, Texas on Sunday.

Gray had just edged out Laughlin for the round 1 win when the two met to collect their time slips after the race. Gray was apparently displeased with Laughlin’s staging procedure.

“I got down there, turned the car off and got out," said Laughlin, according to Geiger Media Global. “We were both walking over to the ticket stand to get our time slips and I had absolutely nothing to say to him. He grabbed his ticket before I got mine and then he slapped me on the back and said ‘how the [expletive] did that work out for you?'"

According to Laughlin, the two exchanged more words before Gray’s team arrived to check out what was going on.

“His guys got down there and I told them, ‘this kid has a lot to learn so someone please get a hold of him.’ And then it was, ‘to get to him, you’re going to have to get through us,’ and it went downhill from there.

“We got back to the pit and I was telling Richard (Freeman, engine supplier) the story and Tanner is standing over there smiling at us from his pit. Richard said, ‘What are you looking at?’ and Tanner throws his hands up like ‘bring it on,’ and that’s when the crews came together.

“The whole thing is just stupid and could have been avoided if he just grew up a little. He’s going to have a very hard career if he acts like a spoiled kid every race."