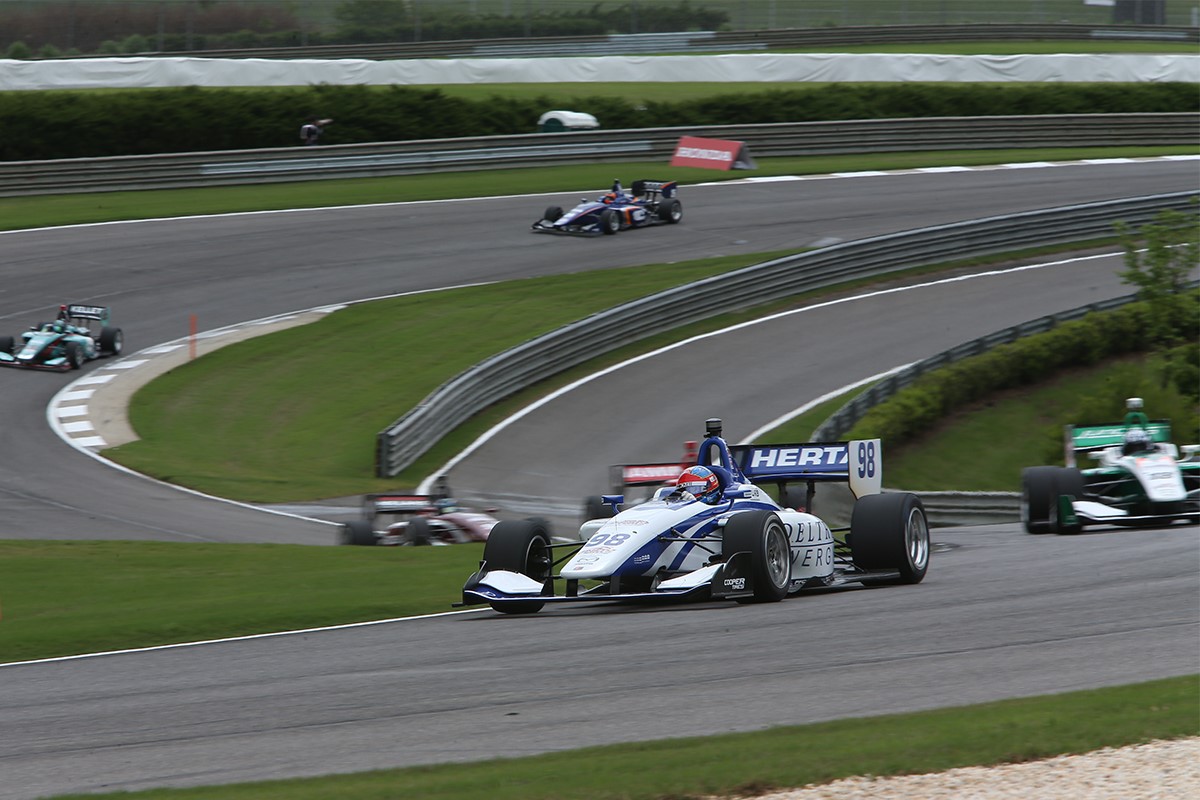 The 400th race in the history of Indy Lights Presented by Cooper Tires might not be remembered as a classic but it will likely never be forgotten by Colton Herta. The 17-year-old son of 1993 Indy Lights champion Bryan Herta made the most of an advantageous opportunity as he led from flag-to-flag this afternoon for Andretti-Steinbrenner Racing at Barber Motorsports Park.

Herta was presented with his milestone trophy in Victory Lane by James Hinchcliffe, who in addition to winning the 300th race since the series’ inception in 1986 – at Long Beach in 2010 – was the most recent Verizon Indy Car Series race winner, coincidentally also at Long Beach just two weeks ago.

Qualifying this morning was canceled due to a waterlogged race track following heavy overnight rain, which meant the grid for today’s second leg of the Mazda Indy Lights Grand Prix of Alabama Presented by Cooper Tires was determined according to championship points. Herta, despite a lowly 10th-place finish yesterday, thereby lined up on the pole ahead of Kaiser, Aaron Telitz (Belardi Auto Racing) and Jamin.

The track was fully dry in time for the noon start, but that didn’t prevent Pato O’Ward (Team Pelfrey) and Zachary Claman De Melo (Carlin) from making contact in Turn Two. Both returned to the pits but neither was able to continue.

After a couple of laps run under caution, Herta took off into the lead, chased by Kaiser and Jamin, who had managed to sneak past Telitz prior to the earlier yellow being displayed.

Farther back, Santi Urrutia’s miserable run of luck continued on the following lap when contact with the rear of Belardi teammate Shelby Blackstock’s car in Turn Three forced him into a spin and then a visit to the pits for a replacement nose cone. Urrutia resumed at the back of the pack and showed what might have been by regularly matching the race leader’s pace and even claiming the bonus point for fastest race lap. Sadly, he could salvage a 13th-place finish.

Herta, meanwhile, was untroubled at the front as he extended his advantage virtually every lap before taking the checkered flag a commanding 9.1465 seconds clear of Kaiser, who claimed the Staubli Award.

Jamin finished another couple of seconds back in third, narrowly ahead of Carlin’s Neil Alberico, who followed up his podium finish yesterday by passing Telitz, then closing down the gap to Jamin and placing the winner of the 2015 Cooper Tires USF2000 Championship Powered by Mazda under intense pressure in the closing stages.

Telitz clung on to fifth ahead of Argentine rookie Nicolas Dapero, who earned the Tilton Hard Charger Award after starting 10th.

Herta’s second win of the new season enabled him to extend his championship lead to 16 points, 101-85, over Kaiser with four of 16 races now in the books. At stake is a Mazda Scholarship valued at $1 million which will guarantee the winner of the top level of the Mazda Road to Indy Presented by Cooper Tires an entry for at least three races in next year’s Verizon IndyCar Series, including the Indianapolis 500.

Colton Herta (#98 Deltro Energy Mazda/Andretti-Steinbrenner Racing): “I’m so happy to have won the 400th race, and to go into the history books of the series. But the first thing that crossed my mind at the checkered flag was relief – it’s such a physical track so when you’re out in front with a sizable gap, it’s a long race. Having the inside going into Turn One on the first lap was huge, because it’s so hard to pass here. Kyle was close to me on the first lap, but after that I was on my own. I do think that the more experience you have out in front, the better you are at staying calm. I think I’m better at that now because I have been up there in championships in Europe and it hasn’t worked out – and the championship is the focus now."