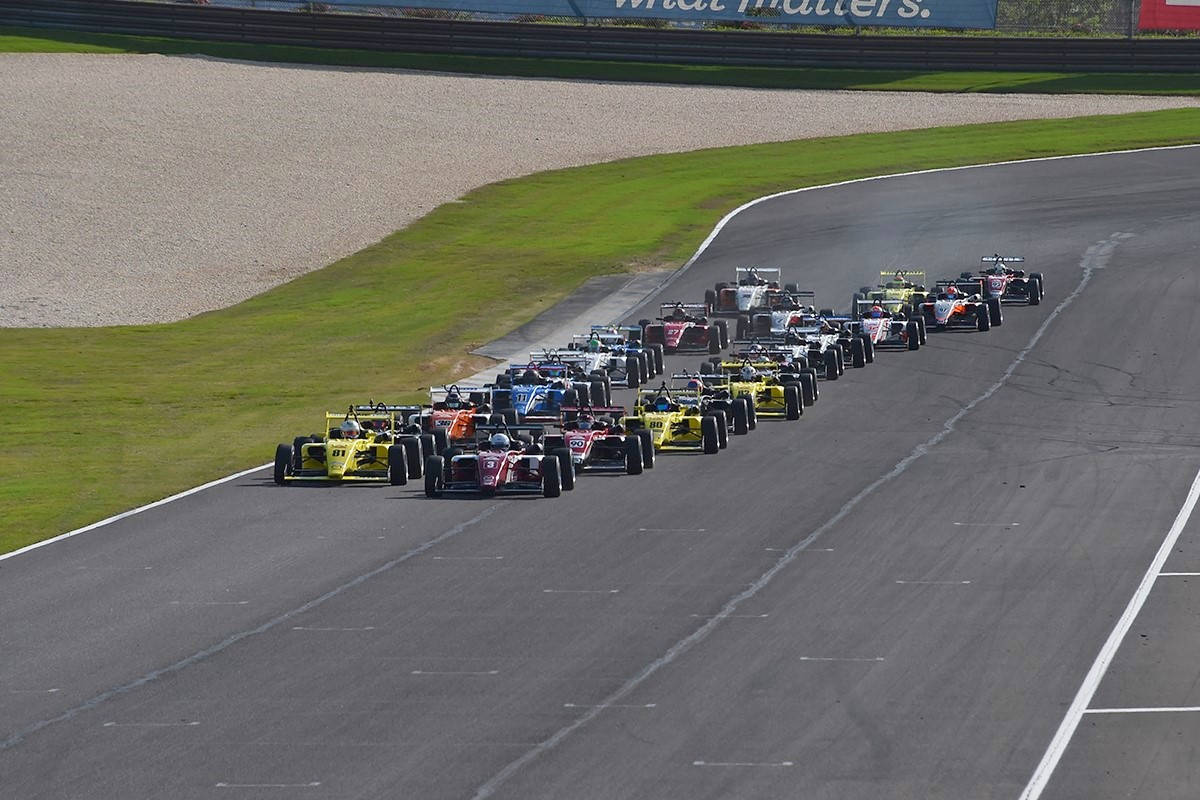 LEEDS, Ala. – This afternoon’s second leg of the Mazda USF2000 Grand Prix of Alabama Presented by Cooper Tires at Barber Motorsports Park, Round Four of the Cooper Tires USF2000 Championship Powered by Mazda, ended in similar fashion to yesterday with young Americans Oliver Askew and Kaylen Frederick holding the top two positions. This time, though, a small mistake by 14-year-old Frederick gifted Cape Motorsports’ Askew a clear advantage which he held to the finish to claim his third win in just four starts.

The initial start to today’s 30-minute race was clean, with Askew, who had secured pole this morning with an impressive last-ditch effort, holding the advantage over fellow front row qualifier Frederick (Team Pelfrey). There was much shuffling of positions in their wake, followed just seconds later by no fewer than three separate incidents – in Turns Three, Five and Eight – which left four cars stranded out on the race track and required an extensive full-course caution to clean up the wreckage.

Askew, from Jupiter, Fla., once again made an exemplary getaway when the green flags waved with a little less than 15 minutes remaining. He then drove flawlessly to victory, extending his championship lead to a whopping 34 points, 122-88 over both Frederick and young Dutchman Rinus VeeKay, who finished fourth for Pabst Racing.

Frederick placed Askew under intense pressure – and once again claimed the bonus point for fastest race lap – but his hopes of snatching the win effectively evaporated on Lap 11 when he carried a little too much speed into Turn One, bobbled wide on the exit and lost a couple of seconds to his primary rival. Thereafter, Frederick wisely settled for second as he edged away from Thompson, who narrowly held off a charging VeeKay at the checkered flag.

Kory Enders, from Warwick, N.Y., ran a strong sixth in the early stages for DEForce Racing before losing out to the more experienced Englishman, Toby Sowery, on Lap 13. Sowery capped an encouraging debut weekend for the Benik team with his fifth-place finish.

New Yorker Robert Megennis (Team Pelfrey), who had won the opening race of the season in St. Petersburg, Fla., also found a way past Enders, while Norwegian teammate Ayla Agren finally found a way past Mexican Moises de la Vara, in the second DEForce Tatuus USF-17, on the final lap to claim eighth.

Dakota Dickerson (Newman Wachs Racing) rebounded impressively from one of the first-lap incidents, charging from 18th at the restart to oust Darren Keane (Benik) for 10th on the final lap.

Cape Motorsports picked up yet another PFC Award as the winning team, while Thompson earned the Staubli Award and debutant Flinn Lazier, 18-year-old son of 1996 Indianapolis 500 winner Buddy Lazier, claimed the Tilton Hard Charger Award after rising from 22nd on the grid to 12th for Newman Wachs Racing.

The Cooper Tires USF2000 Championship Powered by Mazda will return to action, once again in support of the Verizon IndyCar Series, at the Grand Prix of Indianapolis on May 12-13.

Oliver Askew (#3 Mazda Motorsports/MC Racing-Cape Motorsports): “It’s a dream come true. We had a fantastic car so we had the chance to do well this weekend and I just took it. Right from Spring Training, when we were quick seven of eight sessions at Homestead, I knew we were going to be really good. The main goal is the championship but a win pays the most so this is fantastic. I’m probably the most anxious for qualifying because, as close as the field is, that can be the race right there. Again today, I pretended it was a qualifying session and just put in the laps. I don’t look in the mirrors – I’ve trained my eyes not to, because I would just see that yellow car behind me."