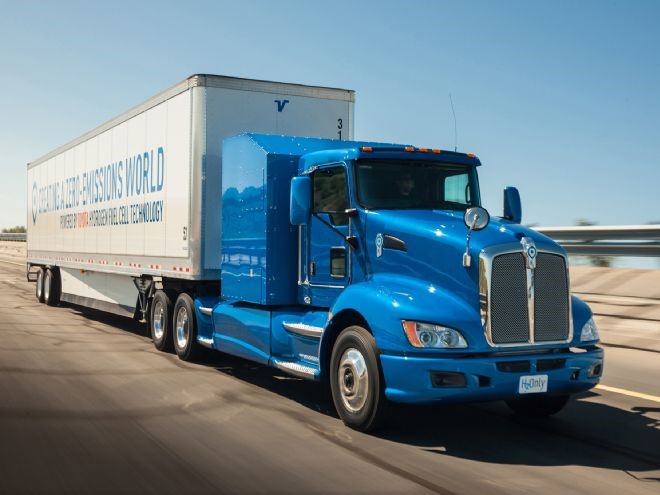 For decades, Class 8 trucks have been powered predominantly by one fuel: diesel. Lately, some trucks have started to utilize liquefied natural gas (LNG) and dimethyl ether (DME), but diesel is still king, powering more than 95 percent of Class 8 trucks. However, that percentage may decline in the years ahead, if Toyota and other advocates of hydrogen fuel cells have their way.

As part of a study in conjunction with the Port of Los Angeles, the California Air Resources Board (CARB) and California Energy Commission (CEC), Toyota built its “Project Portal" concept truck utilizing two hydrogen fuel cell stacks from the Mirai fuel cell passenger car, mated to a surprisingly small 12 KwH battery pack, only slightly larger than the 8.8 kWh pack used in the Prius Prime plug-in hybrid.

Motivational force comes from an electric motor producing 670 hp and 1,325 lb-ft of torque. The truck has a gross vehicle weight rating of 80,000 pounds, with an estimated range of 200 miles in typical drayage use.

Although external badging was removed, the concept truck appears to be based on a Kenworth T-660. Toyota representatives confirmed a Kenworth T-660 “glider" (no engine or drivetrain) chassis was purchased for the project.