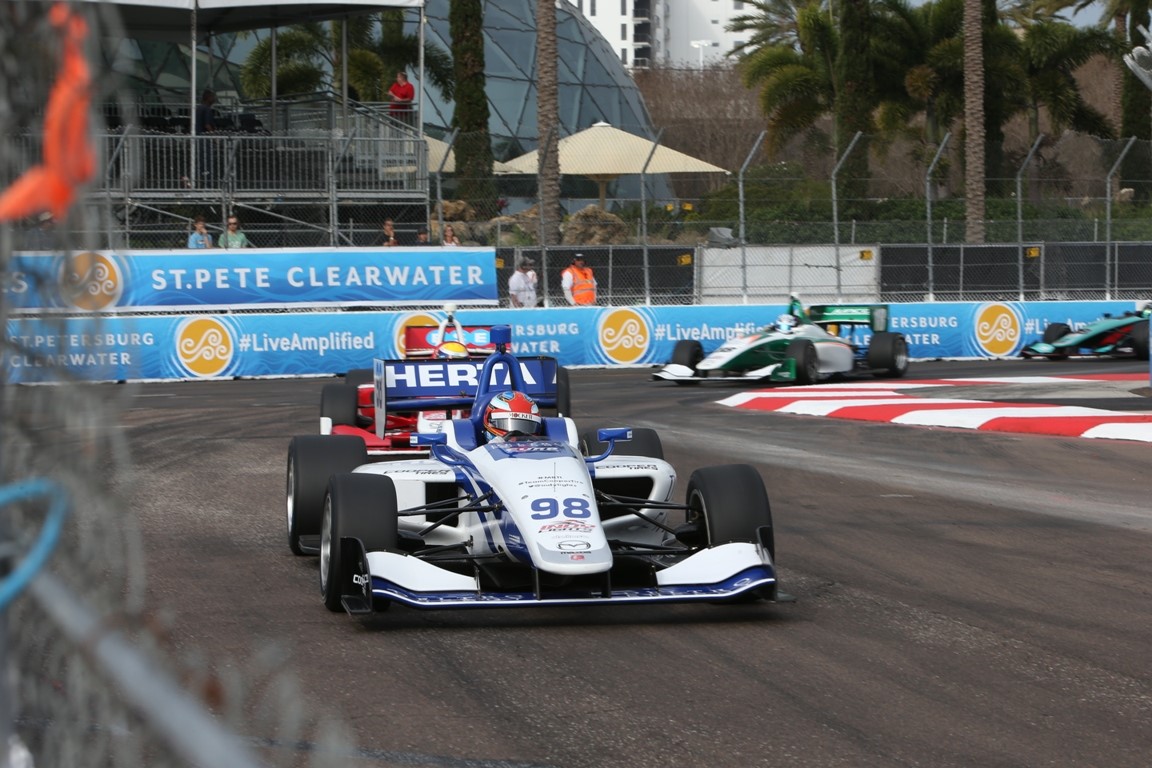 Two levels of the three-step Mazda Road to Indy Presented by Cooper Tires open-wheel development ladder will be in action this weekend, April 21-23, in support of the Verizon IndyCar Series at Barber Motorsports Park in Leeds, Ala. Young American drivers lead the way following the opening races of the season last month on the streets of St. Petersburg, Fla., although fifteen different nations and five distinct continents (North and South America, Asia, Australasia and Europe) will be represented as competitors in Indy Lights Presented by Cooper Tires and the Cooper Tires USF2000 Championship Powered by Mazda prepare for battle on the scenic and challenging, 2.3-mile, 17-turn road course.

A high-quality field will be chasing the honor of winning the 400th race in Indy Lights history dating back to 1986. The milestone will be attained on Sunday in the second of two races that will comprise the Mazda Indy Lights Grand Prix of Alabama Presented by Cooper Tires. James Hinchcliffe, who won the 300th Indy Lights race at Long Beach in 2010 and, coincidentally, triumphed in the most recent IndyCar race at Long Beach two weeks ago, will be on hand to present a special winner's trophy.

Colton Herta, driving for Andretti-Steinbrenner Racing, currently holds the championship points lead following a sensational debut in Florida where he finished second in Race One and then the following day eclipsed the record for the youngest ever winner. The son of 1993 Indy Lights champion Bryan Herta surprised even himself with his form but has every intention of building upon his championship lead.

“It's amazing the success we had at St. Pete and it was really unexpected as well. I think we are still on a high from it," admitted Herta, who celebrated his 17th birthday on March 30. “So coming into Barber as the championship leader feels amazing and I'm full speed ahead.

“Because we have the championship lead it's going to be all about defense and maintaining a good position without compromising any risk," he continued. “We need to finish both races with strong points finishes – preferably on top of the podium."

Fellow rookies Aaron Telitz and Pato O'Ward expect to be hot on Herta's heels. Telitz, from Birchwood, Wis., won the opening race of the season for Belardi Auto Racing, carrying the distinctive Soul Red colors after winning last year's Pro Mazda Championship Presented by Cooper Tires – as well as a Mazda Scholarship to assist in the graduation to Indy Lights – while O'Ward, from Monterrey, Mexico, who pushed Telitz to the limit last year in Pro Mazda (and won both races at Barber), claimed a pair of top-five finishes on his Indy Lights debut with Team Pelfrey.

Series veterans Shelby Blackstock, from Nashville, Tenn., in a second Belardi entry, and Kyle Kaiser (Juncos Racing), from Santa Clara, Calif., currently share fourth in the points table, chased by Uruguay's Santi Urrutia (Belardi Auto Racing), who began the year as a favorite for top honors after finishing a close second in the 2016 title-chase, and Californian Neil Alberico (Carlin). Urrutia won one of the corresponding races at Barber last year.

Other contenders will include Frenchman Nico Jamin (Andretti Autosport), who won a USF2000 race at Barber en route to the championship in 2015, and Brazilian Matheus Leist, the reigning BRDC British Formula 3 Champion who is looking to bounce back from a disappointing first North American race weekend at St. Petersburg with the Carlin team.

On-track activities will commence with a 45-minute practice session on Friday afternoon. The weekend will comprise a 30-lap/45-minute race on Saturday at 2:00 p.m. EDT and a 35-lap/60-minute “feature" race on Sunday at 11:45 a.m. – immediately prior to the IndyCar headline event. Both races will be preceded earlier in the day by a 30-minute qualifying session.

The strong 24-car field will be led by 20-year-old Oliver Askew, from Jupiter, Fla., who turned a lot of heads for Cape Motorsports in just his sixth weekend of car racing – and only his second in the U.S. following a one-off outing last year with the Skip Barber Racing School at Road America. Askew, who earned his opportunity by winning the inaugural Mazda Road to Indy USF2000 $200k Scholarship Shootout last fall, fought back from an incident in the first practice session to finish second and then first in the opening double-header weekend of the new season.

“It feels really good to start the season with a points advantage," said Askew, a former standout in the karting ranks who also earned a coveted Team USA Scholarship in 2016. “I think my success so far says a lot about Cape Motorsports and the people working around me. I have had a steep learning curve.

“Barber should be a good stop for us," he continued. “I really enjoyed turning laps around there (in testing), even though it's unlike any track I've ever been to. I expect to be at the front of the grid this weekend. My mind-set is to leave with as many points as possible."

Askew will have no shortage of talented youngsters seeking to knock him off his perch. Prime among them must be Robert Megennis (Team Pelfrey), 17, from New York, N.Y., who won the opening race in St. Petersburg; 16-year-old Dutchman Rinus VeeKay, who claimed a pair of podium finishes for Pabst Racing; Kaylen Frederick, from Potomac, Md., the youngest driver in the field at just 14, who nabbed a pair of top-five results for Team Pelfrey; and Canadian Parker Thompson, who capped a fine series debut for Exclusive Autosport by qualifying on pole and finishing second in one of the races in Florida. Thompson, incidentally, claimed a weekend sweep of two race wins at Barber in 2016.

After achieving tremendous success in karting in recent years, Benik will step up to car racing for the first time this weekend, fielding a pair of cars for Keane, from Boca Raton, Fla., and Sowery, who has displayed his talents in several series in recent years, winning the MSV F3 Cup in his native England in 2014, the Indian MRF Challenge in 2014/2015 and most recently finishing third in last year's BRDC British Formula 3 Championship.

Mickler, from Perth, Australia, who won the Skip Barber Karts to Cars Scholarship Shootout in 2016, will drive a third John Cummiskey Racing Tatuus alongside Kris Wright, from Pittsburgh, Pa., and Colin Kaminsky, of Homer Glen, Ill., while Lazier, the highly rated son of 1996 Indianapolis 500 winner Buddy Lazier, will make his professional racing debut with Newman Wachs Racing alongside Dakota Dickerson, from San Diego, and New Yorker Andre Castro, both of whom displayed good speed at St. Petersburg. Brazil's Bruna Tomaselli, who made her USF2000 debut in an older National Class Van Diemen at St. Petersburg, will step up to the Championship Class this weekend with ArmsUp Motorsports and teammate Devin Wojcik.

A busy weekend for the USF2000 contingent will commence with a pair of 30-minute test sessions on Thursday morning, followed by official practice later in the afternoon and then a 20-minute qualifying session and a 30-minute race on both Friday and Saturday.

Live streaming and live timing will be available on the respective series websites, indylights.com and usf2000.com, as well as on indycar.com and the Road To Indy TV App. The history-making 400th Indy Lights race will air on NBCSN at 12:00 pm on April 26.