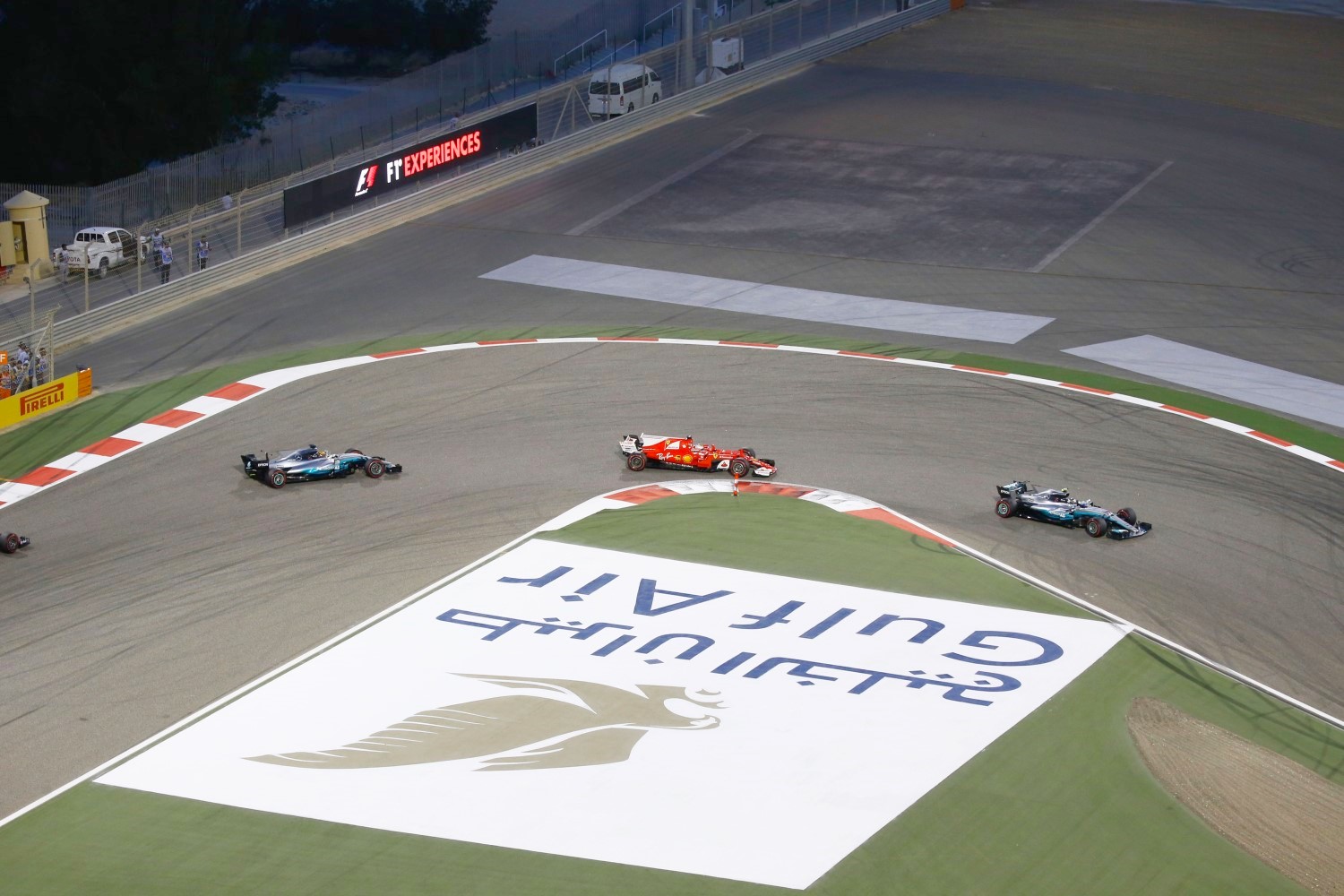 Ferrari, Mercedes 'about equal' – Wolff
(GMM) Three races into the season, it is now clear that the world of F1 has a real championship battle on its hands.

"We are now completely confident that our victory in Melbourne wasn't just a one-off," he said.

"I think we are about equal," he said. "Perhaps over one lap we have a slight advantage, but the Ferrari works a little better with the tires."

"There were several factors that prevented us from doing more," he said. "We had a problem in the pitstop, Lewis had the five-second penalty, and Valtteri had too much pressure in his tires.

"But there is no discussion — Vettel was the best and Ferrari had the best strategy. We seem to have a really exciting world championship," Lauda added.

And not just that: it seems Red Bull is pushing to make it a three-team battle in 2017 as well.

"I don't know what happened to them but I was expecting them to be faster in the race," said Vettel. "It's great that, unlike the last few years, there is now a fight for victory."

And that sentiment is echoed up and down the paddock — even by Fernando Alonso, who left Ferrari a few years ago to join troubled McLaren-Honda.

"We are all happy to see Ferrari win," the Spaniard is quoted by Italy's Mediaset. "Mercedes was too used to winning so it's good news to see them (Ferrari) ahead now."

(GMM) Felipe Massa has warned Max Verstappen to "be careful" with comments he makes to the media.

After complaining that the Williams veteran spoiled his qualifying lap in Bahrain, youngster Verstappen said he would not be seeking Massa out for talks.

"He is Brazilian, so there is not much to talk about," Dutchman Verstappen was quoted as saying.

But after hearing about Verstappen's comments, Massa said he sought the teenager out for talks.

"For sure it's wasn't right to talk about Brazilians without knowing what he's talking about," Massa told UOL Esporte.

The war of words between Massa and Verstappen actually dates back to Monaco two years ago, when the 35-year-old Brazilian suggested the youngster is "dangerous".

Massa said he also did not appreciate Verstappen's complaints about his driving in Bahrain qualifying.

"I didn't even stop him," Massa insisted. "Maybe I was the scapegoat because he couldn't get ahead of his teammate, so someone had to be to blame.

"It was the same between me and Hulkenberg, but did you see one complaining about the other?"

The news follows the shock revelation in Bahrain this weekend that Alonso will sit out Monaco next month to make a bid for victory in the equally famous Indy 500.

Eric Boullier, the McLaren team boss, admitted it is part of a plan to convince Alonso to ride out the current performance crisis and sign a new contract for 2018.

"Everyone has his tricks when negotiating," Der Spiegel quotes the Frenchman as saying.

Indeed, Alonso's frustration is currently palpable, as he complained on the radio in Bahrain that the Honda is the least powerful engine he has ever raced.

"When the red lights go out you are motivated and you start to fight," he explained afterwards, "but when you are so far behind on the straights that you cannot defend your position, you cannot enjoy the battle.

"Now let's focus a little on the Indy 500," the Spanish sports newspaper Marca quotes Alonso as saying after Bahrain.

"It will also do me good to refresh my head a little," he added.

That is because Alonso acknowledges that, even if McLaren and Honda are working hard on fixes, it will take time.

"We have to have a little patience," he said. "The next month or the next three or four races are going to be difficult.

"The amazing thing is that the other car was not even in the race, which for Stoffel I don't know if it was bad luck or good luck. So we have to do something but I don't know if the team has any idea what.

"We must find a solution as soon as possible," Alonso added.

As for the reports Alonso already has an agreement with Porsche to contest next year's Le Mans, a McLaren source told El Mundo Deportivo "there is no plan" for that.

And sources close to Alonso added: "It is not true. It is an invention."

Valtteri Bottas was left to rue a "tricky race" as he struggled with his rear tires at the Bahrain Grand Prix, dropping from the lead to third position.

Bottas controlled the field from his maiden pole position but fell to second after the first round of stops and was unable to challenge Ferrari rival Sebastian Vettel.

"It was a really tricky race for me, I was struggling with the pace all through the race," said Bottas,

"In the first stint we had an issue with the tire pressures, so it explains the rear-end struggle, but every stint after that I was rear limited.

"I was out of the tools on the steering wheel, I was just oversteering all through the race and that's why the pace was slow, which is a real shame.

"For sure the target for today was [to finish] a lot, lot higher."

Bottas was nonetheless encouraged by his progress during his third event with Mercedes.

"I think this was overall the best weekend yet for me with the team, but there's a lot more to come," he concluded.

Lewis Hamilton has apologized to his Mercedes team after he was handed a five-second time penalty for driving unnecessarily slowly in the pit lane during the Bahrain Grand Prix.

The appearance of the Safety Car meant that Mercedes was set to double stack its drivers during the first pit-stop phase, with Valtteri Bottas serviced in front of Hamilton.

Hamilton drove slowly exiting the final corner in order to keep Red Bull's Daniel Ricciardo at bay, before slowing further as he entered the pit lane.

Stewards deemed that Hamilton, who nonetheless slipped behind Ricciardo, before overhauling his rival at the restart, had broken the regulations, and was handed a time penalty.

Hamilton was twice allowed through by Bottas, who he thanked for "being a gentleman", but was unable to challenge Sebastian Vettel up front, who won by almost seven seconds.

"It was a very difficult race, it didn't start out the best," conceded Hamilton.

"The pit lane was really my fault, so apologies for the team for losing there.

"I tried my hardest to catch up, but there was a long, long way to go, 19 seconds [after the final pit-stop]. I gave it everything I could, but Ferrari did a great job today.

"We're going to push hard together, regather as a team and come back fighting.

"Of course the disappointment is there, losing points for the team, particularly when you could have potentially won the race. It's definitely painful, but it is what it is.

"All I can say is I gave it everything I could."

Sebastian Vettel says he initially feared the Safety Car period during the early stages of the Bahrain Grand Prix would work against him, before he went on to register victory.

Vettel moved up to second at the start, passing Lewis Hamilton at Turn 1, and became the first of the frontrunners to pit, fitting the Super Soft tires, having hounded Valtteri Bottas.

Vettel rejoined significantly down the order before the Safety Car was deployed when Carlos Sainz Jr. and Lance Stroll collided at Turn 1 a couple of laps later.

The remainder of the lead group elected to pit under the Safety Car, but re-emerged from their stops behind Vettel, who assumed control of the race.

"I really tried to put Valtteri under pressure; he didn't do any mistakes and it was difficult down the straights to get near him," said Vettel

"Then we went for the undercut, made an early stop, the Safety Car came and initially I was like, 'not again!'

"I think it was lucky because the others were close to the pit lane so they couldn't really benefit, I don't know, but it was a bit surprise when I came out ahead of them.

"I thought with the Safety Car I might have lost an advantage.

"After that it was good, the car was amazing to drive."

Vettel also insisted he approached the race with a positive mindset, assured that Ferrari had strong race pace despite a larger than expected one-lap deficit.

"The car has been a pleasure, it was good yesterday and I was a bit down as the gap was so big," he said.

"But something inside me told me that we had a good car and that we could do well, so right from the first lap I felt the car was there.

"The Easter hunt was on, they [Mercedes] were hiding some eggs but it looked like we found them today! I'm really, really happy."

Daniel Ricciardo says he thought he had a genuine shot at victory in the Bahrain Grand Prix before the early Safety Car and switch from Super Soft to Soft tires.

As race leader Bottas struggled with his rear tires, the front running pack bunched up, all five drivers at one stage covered by just under three seconds.

However, at his first pit-stop, under the early Safety Car, Ricciardo swapped to the Soft compound, which he struggled to get up to temperature for the restart.

Ricciardo dropped from third to sixth in a handful of corners, losing out to Hamilton, Kimi Raikkonen and Felipe Massa, only jumping Massa before the finish.

Ricciardo reflected: "I genuinely thought we had a chance to win.

"That first stint was looking really competitive. I could see that Valtteri was struggling, I believe he had some issues with the tires or whatever.

"I was at the end of that train, I could see everyone else, they were sliding around. I was looking after my tires, so we were in a really good position.

"Then the Safety Car came out, we put the Softs on and that tire was just not happening for us today.

"On the restart, out of the last corner, it felt like the tire just wasn't switched on. Basically the whole first I was sliding, so that's why I went back.

"Beyond that the tire never really came good, I was on Massa's pace and we know we're quicker than that, so it was a strange chain of events from the beginning of the race."

Verstappen rocketed from seventh to fourth at the start of the race but dropped out just after his first pit-stop with a rear brake failure at Turn 4.

"I basically lost the rear brakes as soon as I hit the pedal, so the pedal went really long and I couldn't brake anymore," lamented Verstappen.

"The car was performing a lot better and we did the undercut on the Mercedes cars so we would have ended up second behind Sebastian at that point.

"It's very unfortunate, you lose a lot of points."