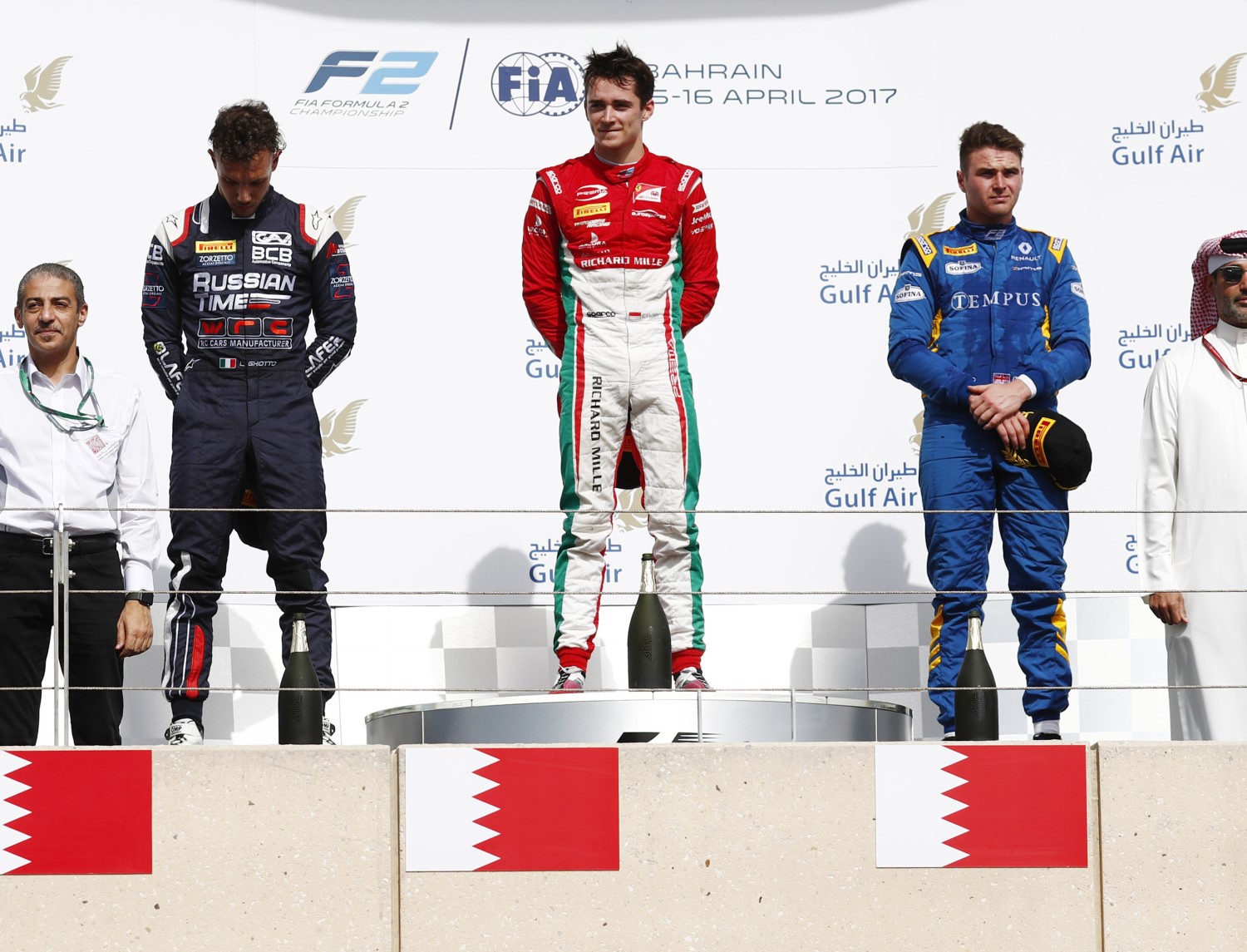 Charles Leclerc made use of an unexpected Plan B to blast to a dramatic win in this afternoon’s FIA Formula 2 Championship sprint race at the Bahrain International Circuit in Sakhir, Bahrain, stopping for fresh rubber from the lead of the race and emerging in P14 before fighting all the way back up for victory ahead of a crestfallen Luca Ghiotto and Oliver Rowland.

With conditions hot but slightly cooler than yesterday thanks to strong winds the teams were looking for options on a circuit renowned for its abrasive surface, but the decision to make a pitstop in a sprint race was one that took most observers by surprise, particularly coming from the lead: the fight back topped off a superb weekend of racing after Artem Markelov’s strong comeback yesterday.

There was drama at the front of the grid before the start when poleman Nobuharu Matsushita failed to make it out on time, forcing the frustrated Japanese driver to start from the pitlane. But when the lights went out his ART teammate pushed front row starter Ghiotto hard from P3, with the Italian braking as late as possible to slide inside and into the lead at turn 1 ahead of Albon, a fast starting Leclerc, Norman Nato, Jordan King, Oliver Rowland and Artem Markelov.

Nato was soon out of the race after a come together with King, and the resultant safety car period gave everyone a breather for 2 laps before going live again, with Leclerc making short work of disposing former teammate Albon, followed almost immediately by Rowland, and then Markelov next time round. The Russian was looking for more after his success yesterday, blasting into the podium positions by deposing Rowland on lap 7 and setting the fastest lap, but 3 laps later he was in the pits, switching from his options to a set of primes as Leclerc led the way, having grabbed the lead from Ghiotto the lap before.

Antonio Fuoco was looking to emulate his teammate: after starting in P9 he was up to P4 on lap 11 by easing past King, giving the hurry up to Rowland. 2 laps later the Briton barged past Ghiotto for P2, leaving the Italians to squabble among themselves, before Leclerc dropped a bombshell by pitting on lap 15, emerging ahead of Markelov and wasting no time in fighting back towards the lead, now held by Rowland, setting the fastest lap in the process.

In a 23 lap race it seemed impossible that the Monegasque driver could force his way back, and the action continued at the front of the race as King snuck past Fuoco, giving him the space to look forward to Rowland instead of in his mirrors. The Briton was falling back towards the Italian as Leclerc broke back into the points positions, and on the penultimate lap the inevitable happened as Ghiotto forced his way into the lead, just as Leclerc blasted by King for P3.

And on the final lap Leclerc on fresher rubber easily dispatched Rowland on the front straight and Ghiotto in the back section of the circuit before cruising to his maiden win ahead of the pair, to the obvious delight of his PREMA team. Behind then Nicholas Latifi had done a superb job of managing his tyre for P4 from P11 on the grid ahead of King, with Nyck De Vries grabbing his first points for 6th from 10th at the start ahead of Albon, and Markelov rounding out the points in P8.

After the first round Leclerc leads Markelov by 36 points to 28, ahead of Rowland on 20, with Ghiotto, Nato and King on 18, while in the Teams’ Championship RUSSIAN TIME is on top with 46 points ahead of PREMA Racing on 38, DAMS on 28, with Pertamina Arden and MP Motorsport on 18 points as they look forward to the next round of the championship in Barcelona, Spain on 12-14 May.