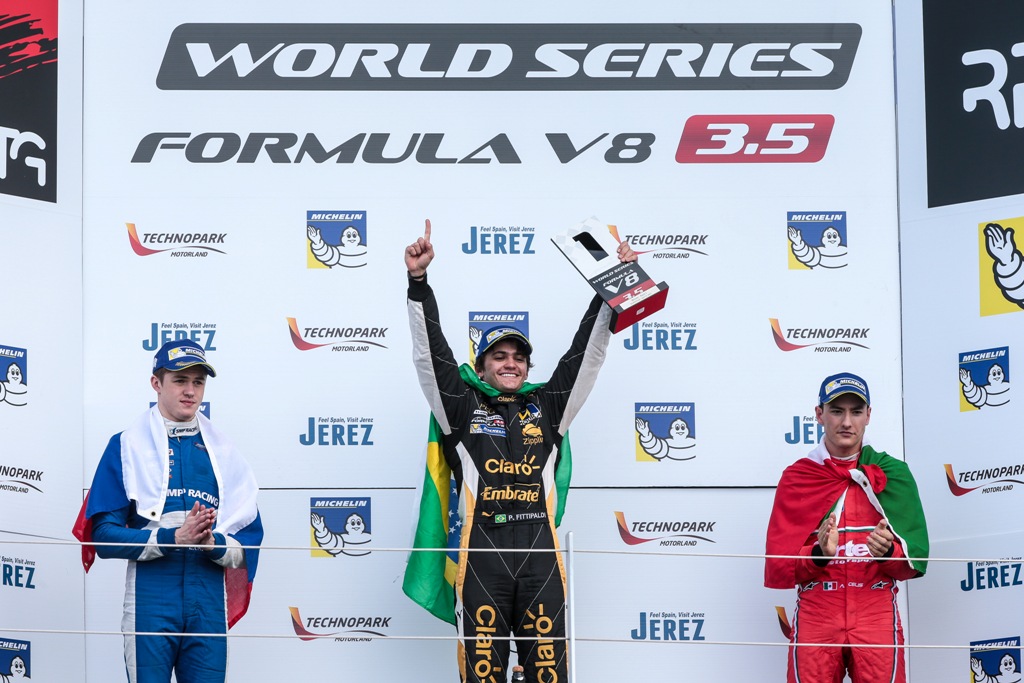 Pietro Fittipaldi (Lotus) cruised to his first win of the 2017 World Series Formula V8 3.5 by leading race 1 from the pole at Silverstone. The Brazilian crossed the line in front of Egor Orudzhev (SMP Racing by AVF) and Alfonso Celis Jr (Fortec Motorsports) while Italian Damiano Fioravanti (Il Barone Rampante) ended up as the best rookie.

The Israeli racer soon came back to the pit-lane and retired, while Menchaca also had to stop following to an early contact with Tereschenko. Fighting with the Russian, his teammate Mason went wide losing P8 to Kanamaru. In the meantime, Celis got close to Binder for P4.

On lap 10, the Fittipaldi's advantage on Orudzhev went down to 5.5 seconds, with Binder fending off the attacks of Celis. Mason rebounded at the last chicane on lap 2, reclaiming eight place from Kanamaru. On lap 15, Celis passed Binder for P4 on the inside of Woodcote, while Fittipaldi continued to lose ground on Orudzhev.

On lap 16, Celis caught up with Isaakyan and fought for podium after setting the fastest lap, while Mason passed Tereschenko for seventh place. On lap 26 the battle between the Mexican and the Russian, who ended up wide and eventually let the final podium position slip from him.

At the end of the race the car of Orudzhev was disqualified by the stewards for breaching article 21 of Sporting Regulations, and article 4.2 of the Technical Regulations. The team appealed the decision, so the results stand still, pending appeal.

The second race will take place tomorrow at 9:58 with mandatory pit-stop between lap 5 and 15.

Pietro Fittipaldi (Lotus)
"It was a great day we've been able to catch all the pole positions and also the victory in race 1. Lotus gave me a fantastic car. Throughout the race we had a great start, but then I had a problem, I think it was an exhaust, and I was losing a lot of speed. After th at I had do adapt myself and push as hard as I could to stay within a good gap from Egor, but we've been able to score this win and I'm really happy".

Egor Orudzhev (SMP Racing by aVF)
"Both qualifying sessions were disappointing for us as we could have been able to go higher. The race went well and we had a good pace, the tyres didn't go off too much but when I caught Pietro I lost the front ones as I had no grip. It was dropping and I could do nothing. Alfonso caught me just in the last lap, let's see for tomorrow and thanks to SMP Racing and AVF".

Alfonso Celis Jr. (Fortec Motorsports)
"Since Collective Test 1 where we set the pace our potential was clear, even if we couldn't take advantage of it in qualifying with a yellow flag yesterday and a red flag today. It's disappointing start from the back with this downforce, but I did my best. There was not much more I could do and I gave it all on track. I'm pleased with the result".

Damiano Fioravanti (Il Barone Rampante)
"It was a difficult race for me as it was my first in the World Series. I'm a bit tired, but it's fine, considering it's such powerful car on a difficult track like Silverstone. The start was not amazing but the others struggled too so I was sixth after second corner and I kept my position untilthe end, being the best rookie, I'm pretty happy with that".

Pietro Fittipaldi delivered his second consecutive win for Lotus in the opening round of the 2017 World Series Formula V8 3.5 series at Silverstone, within a fantastic paddock atmosphere within the FIA WEC Season-Opener. After setting two pole positions in qualifying, the Brazilian cruised to win on Saturday and then set up a delightful Easter celebration by winning Race 2 in front of Egor Orudzhev (SMP Racing by AVF) and Roy Nissany (RP Motorsport). With a fifth place overall, Konstantin Tereschenko (Teo Martin Motorsport) won the rookie classification.

As the lights went off, Fittipaldi led the way, while Rene Binder (Lotus) was caught by the pack despite starting from the front row. At the first corner, Nissany fended the attacks of the SMP duo, with Orudzhev keeping the position in front of Matevos Isaakyan (SMP Racing by AVF). At the end of the first lap, Fittipaldi led from Nissany, Orudzhev, Isaakysan, Binder, Nelson Mason (Teo Martin Motorsport), Yu Kanamaru (RP Motorsport), Alfonso Celis Jr. (Fortec Motorsport), Diego Menchaca (Fortec Motorsports), Tereschenko and Giuseppe Cipriani (Il Barone Ramponte), while Damiano Fioravanti (Il Barone Rampante) stalled on the grid and was retrieved to the pit-lane.

On lap four, after an off in the first sector, Kanamaru went back to the pits and retired, while Celis Jr. entered the pits for changing tires on lap 5. On lap 6, Fittipaldi was still leading and changed his rear tires followed by Tereschenko. At the top of the pack it was Nissany, with Fittipaldi rejoining in P7. On lap 6, Nissany dived to the pits and Orudzhev took the lead. Going for the tire change were also Mason, Menchaca and Cirpiani. Isaakyan took the lead on lap 8 when Orudzhev and Binder pitted.

On lap 9, Mason got by Binder to take P5, while on lap 10 Isaakyan and Fioravanti completed the mandatory stop. Once back running, the Russian was fighting with Mason. The two made contact at Brooklands, and the safety-car came in to recover the two stranded cars. Fittipaldi was still out front leading Orudzhev, Nissany, Binder, Tereschenko, Menchaca, Celis, Cipriani and Fioravanti.

The race restarted on lap 13, while the Fortec Motorsports cars battled. Alfonso Celis Jr moved on Diego Menchaca on lap 18 in the second sector, taking P6. On lap 20, Fittipaldi led the race with 2.5 seconds on Orudzhev and Nissany, Binder and Terschenko rounding out Top-5. Fittipaldi is leading the championship standings with 50 points, followed by Celis (26) and Binder (24).

"Today I had a good start which gave me the chance to wrap up a great week-end with both pole positions and wins here in Silverstone. Guys from behind were putting me a lot of pressure but I've been able to keep a cool head. I can't thank enough the Lotus team, my engineer, all the mechanics as they made a fantastic job, being on the lead of the series is great and I'm already looking forward to the next round in Spa".

"The start was good, I worked a lot with the team on this aspect during the winter. I moved up to third place at the start despite being a little bit behind on the grid. With a more consistent qualifying session I could have even fought for the lead. I battled with Roy for second place and the team also did a great job at the pit-stop so here we are to celebrate another podium".