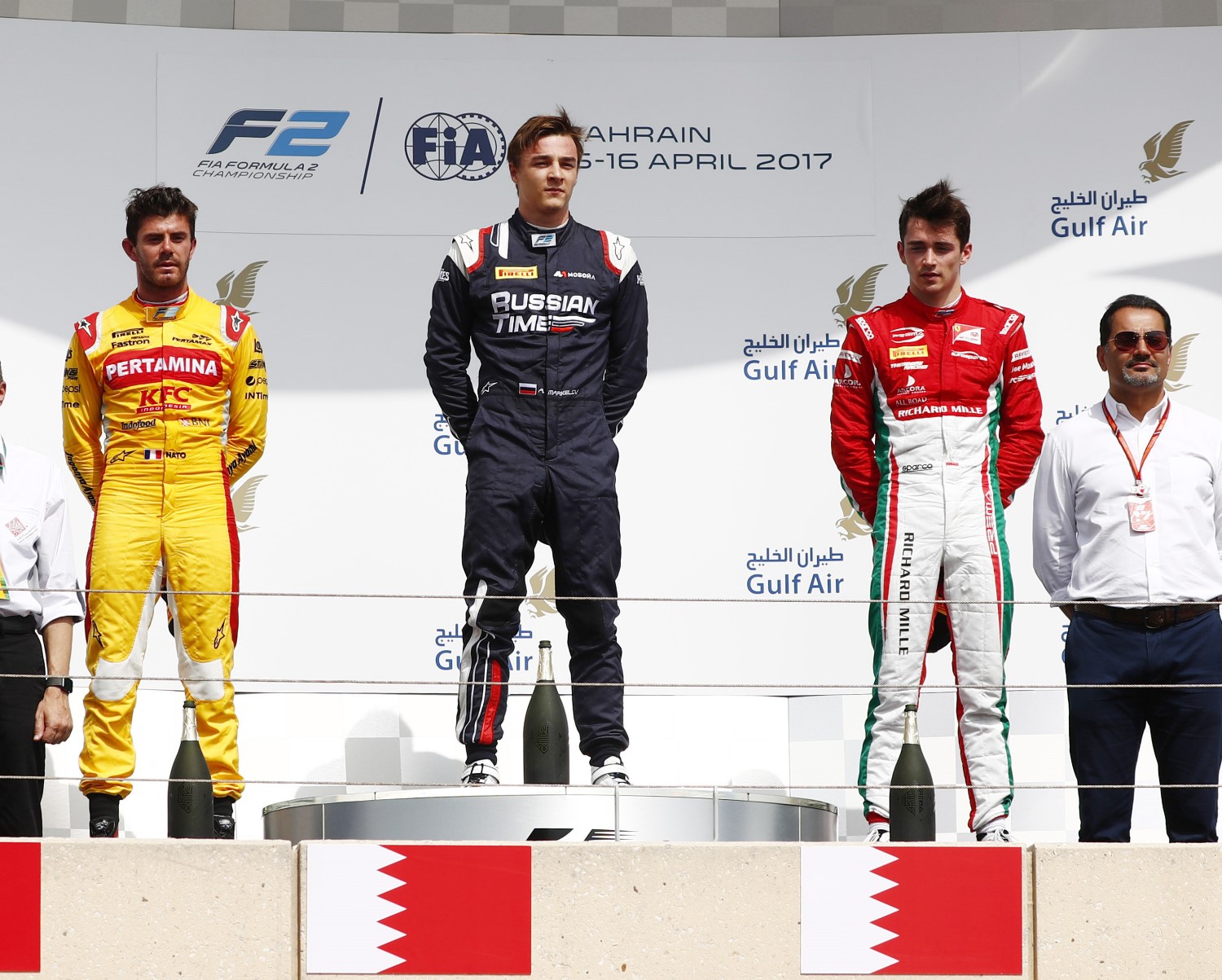 Artem Markelov gambled on a different tire strategy to his rivals at the first FIA Formula 2 Championship feature race this afternoon at the Bahrain International Circuit in Sakhir, mastering the scorching conditions and the life of his tires to blast past Norman Nato and Charles Leclerc in the closing stages of the race for a masterful win.

The Russian made use of a stronger car in the extreme desert heat to run longer on his prime tires than any of his rivals, gambling that the time he lost between their stops and his would be returned to him, and it was a choice that paid off handsomely.

But the work Markelov put in early in the race built the platform for his victory. While poleman Leclerc led the grid away when the lights went out, the Russian was the star of the start, slicing by his rivals from P7 to run outside front row starter Nyck De Vries and through behind Nato for P3 at the first turn, ahead of the Dutchman, Nobuharu Matsushita, Luca Ghiotto and Jordan King, with those starting on the right clearly losing out by starting off the racing line.

Nato was a man on a mission, sliding inside Leclerc at turn one on lap 3 for the lead, but had to concede again at the same place 5 laps latter and the Monegasque driver reclaimed the position, but Markelov bided his time (and tires) behind the pair, while teammate Ghiotto set the early fastest lap to demonstrate the pace the RUSSIAN TIME pair had on tap as he deposed Matsushita for P5.

The teams have a lot of data from this circuit after testing extensively here just 2 weeks ago, but not in the heat radiating down today: the biggest question of the day was who would manage their tires best, and what would be the optimum tire strategy? The option tires lasted longer than expected for those starting on the opposite strategy, and with Nato stopping on lap 15 and Leclerc next time round to cover him it seemed that the rulebook was being upturned.

But Markelov saw an opportunity, and stayed out for two laps longer than the leader despite the danger of losing too much time in between. Nato mugged Leclerc in those laps for the lead before setting a string of fastest laps, further proof that the Russian's strategy was risky, but he re-emerged in P3 and set about regaining the time lost: after his outlap he was 8.5s behind Leclerc, but the gap shrank lap on lap and as the front pair's tires fell away, Markelov came into his own.

The Russian easily dispatched Leclerc on lap 29, demolished a 3.3s gap to Nato within a lap before grabbing the lead next time through and running away, greeting the checkered flag 2 laps later and almost 8 seconds to the good over the disappointed Frenchman, with Leclerc a further 6 seconds back. Behind the top 3 King muscled his way past countryman Oliver Rowland for P4, with Alexander Albon having a strong second half of the race to move up to P6 at the flag ahead of a frantic battle between Ghiotto, Matsushita and Antonio Fuoco, who mugged a deeply dispirited De Vries on the final lap for P9.

And as the celebration commenced the paddock cheered in admiration for a sparkling drive in brutal conditions by Markelov, who started brightly before staying out of the battle for the lead ahead of him and held onto his tires for longer than anyone else, then put in a simply stunning drive to hunt down a victory against the odds. With temperatures expected to be high once again tomorrow for the sprint race, the eyes of the paddock will be watching the Russian nervously to see if he can repeat his efforts.