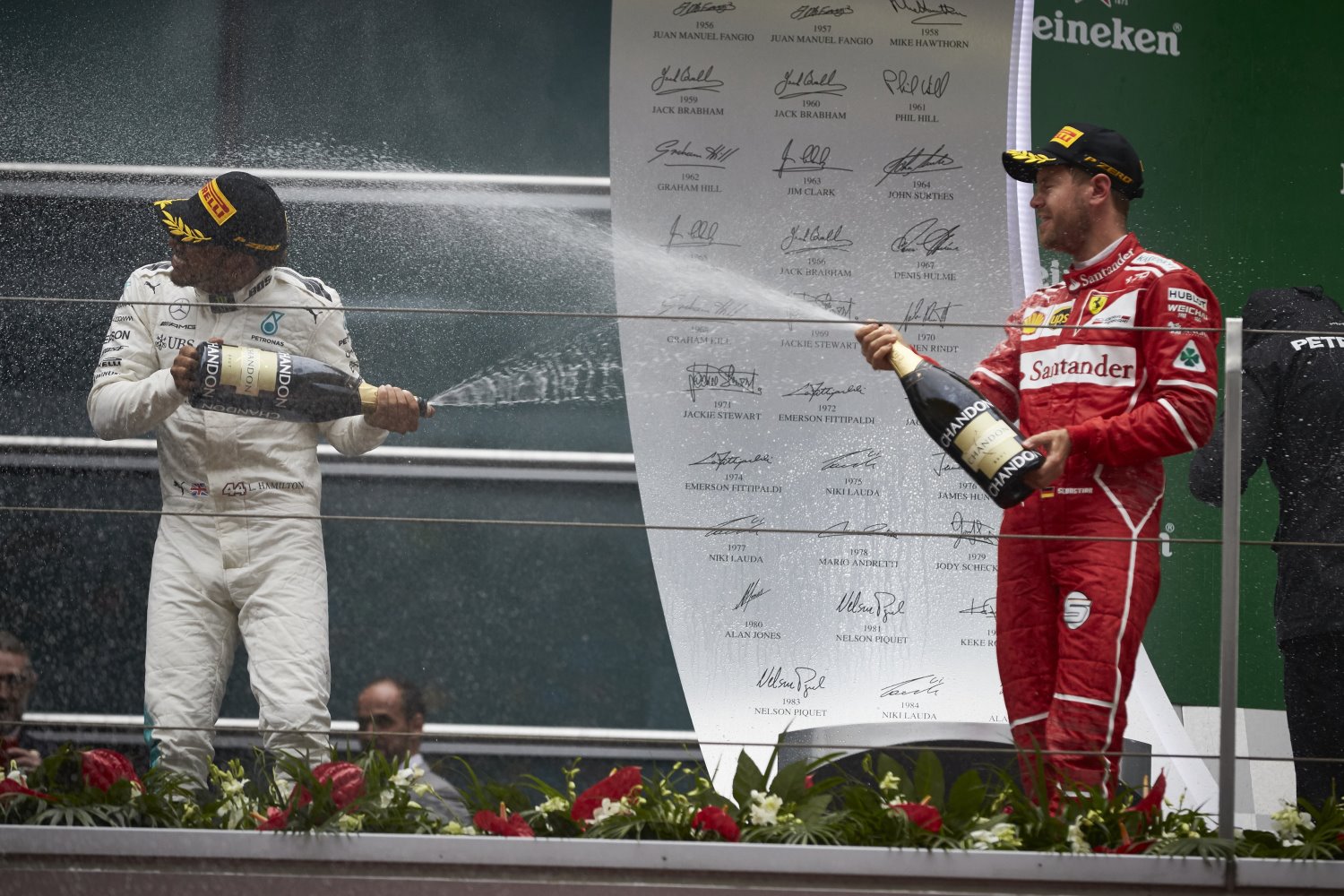 Hamilton predicts 'closest' fight with Vettel
(GMM) F1 heads to the third race of the season with a genuine championship battle between Mercedes' Lewis Hamilton and Ferrari's Sebastian Vettel now shaping up.

The pair have each won a grand prix and finished second so far in 2017, with one analysis saying the Ferrari is better in warmer conditions while the Mercedes prefers the cold.

"The cold helped us here," Hamilton admitted after winning in China.

But his boss Toto Wolff insisted: "I don't see a pattern so far."

Hamilton continued after Shanghai: "It is very, very close.

"There were times when Sebastian put laps in and it was hard to match it. Then there were other times in the race when I was quicker.

"It's going to be one of the closest if not the closest fight I've experienced," he added.

(GMM) Christian Horner has called on F1's governing body to clarify the rule about where drivers need to start grands prix.

Race officials merely "noted" but did not penalize the Ferrari driver for being left of his painted grid 'box' at the start of the Chinese grand prix.

"I can understand what Seb wanted to do," said Horner, who was Vettel's former boss at Red Bull.

"He wanted to be on a less wet part of the track. But can you do that?

"We should know in black and white what is permitted in this area and what is not."

For his part, German Vettel protested his innocence.

"I didn't want to be on the line on the wet track, and there is nothing in the regulations about not doing that," he said.

The Maranello team is raising eyebrows for the step it has managed to take since last year, powering Sebastian Vettel to the joint lead in the championship after two races.

But on-board camera footage of the red racer has shown flexibility of both the front wing elements and floor.

Danner, a pundit for German television RTL, said: "If I was one of the other teams, I would want it (the Ferrari) checked."

(GMM) The 'overtaking problem' with F1's faster new cars took a back seat in Shanghai.

After Melbourne, the paddock collectively worried that while the new cars are faster and more spectacular, the greater aerodynamic drag makes passing significantly rarer.

But the overtaking on Sunday was spectacular, featuring Max Verstappen and Ferrari's Sebastian Vettel in particular.

"I had not seen a Vettel like that for a long time," said Marc Surer, a former F1 driver turned pundit for German television Sky.

German Vettel, an avowed F1 'purist', approved of the show F1 put on in Shanghai.

"It was difficult to get close — like the last race, you felt the effect but here was a much better track to overtake," he said after the race.

"It's the way it should be — you need to make it stick so it doesn't come for free. You shouldn't just open the flap (DRS) and sail past. It was good fun," he said.

"It's like football — not every game is great," Vettel continued. "In Australia we saw few maneuver's, that's true, but that was often the case in Melbourne.

"Here everything was back to normal, so I don't see a problem," he added.

His teammate Fernando Alonso joked in China that his surprisingly strong performance in both qualifying and the race was with "divine" involvement, due to the extreme lack of power from the Japanese-made power unit.

"When I was behind the Williams of Massa, I even commented that I was faster in every corner," he told the Belgian newspaper Het Laatste Nieuws.

But the rookie said there was no way he could have thought about passing the Williams.

"Attack? Our top speed on the straights is too low for racing. It's impossible for us.

"At the start of the straight you look in the mirror and by the end a car is next to you. We urgently require more power," Vandoorne insisted.

"Even with DRS open we can't pass anybody."

The only bright spot for McLaren-Honda is the performance shown in Australia and China by Alonso in the sister car, amid speculation the Spaniard is angling for a switch to a faster team for 2018.

But Vandoorne said after Shanghai: "The engineers said our potential laptimes were similar, but the difference was the groups we were in. Up front, the pace is higher but further back, where I was, you lose time because there are more slow cars."

And he insisted Alonso's pace is not McLaren's only positive anyway.

"The feeling with the car is pretty good," he said, "the updates seem to work, the chassis is moving in the right direction — we just lack speed on the straights."

And Vandoorne said that is not likely to change for Bahrain, either.

"It's the second race of the year, we know it's not easy with our car now but we try the best we can and there will be improvements soon," he said.

"But it will probably not be for Bahrain — I think it's going to be a bit of a difficult weekend for us again."

(GMM) Pascal Wehrlein is shaping up to make his return to the Sauber cockpit in Bahrain.

That is the view of one of his bosses, Mercedes chief Toto Wolff.

Currently, German Wehrlein is reportedly recovering his fitness after injuring his back in a race of champions crash in the winter.

It was also said in Shanghai that Antonio Giovinazzi – Ferrari's reserve driver who crashed both in qualifying and during the race in China – could race in Wehrlein's place for a third consecutive time in Bahrain this weekend.

"Pascal is training and doing weights, preparing himself as much as possible for Bahrain," Wolff, the head of Mercedes' development program, told DPA news agency.

"I am only hearing good things about it — that he is feeling better and stronger. At the moment, everything is pointing at him sitting in the car in Bahrain."

The Italian marque was not alone.

The influential sports daily La Gazzetta dello Sport said after Shanghai that the difference between Raikkonen and his teammate Sebastian Vettel was the latter's overtakes.

"Kimi never even tried," it noted.

But the criticism went all the way to the top, with Ferrari president Sergio Marchionne present in Shanghai to observe the fabled team in action.

"Raikkonen was lacking something? Yes, today he seemed to have other commitments, he was busy doing something else, or maybe he was tired," he told the Italian broadcaster Sky.

"Vettel was much more aggressive."

And Ferrari team boss Maurizio Arrivabene pointed out that Raikkonen did plenty of public complaining about the car over the radio.

"Today Kimi was talking, but I think when you talk a lot you are driving less," he said.

President Marchionne continued: "I will talk to Arrivabene, as maybe it is time for him to sit down with him (Raikkonen) and tell him something clear."

More generally, however, the Italian-Canadian said he is happy with Ferrari's progress so far, with Vettel jointly leading the world championship.

"Can Ferrari fight on par with Mercedes? We already do," said Marchionne.

In the constructors' championship, however, Ferrari is a point behind Mercedes, even though the Italian team has two world champions in the cockpits.

So team boss Arrivabene hinted the time might come when Raikkonen is slotted into a clear supporting role for Vettel.

"The championship has just started, so there's no rush and time will tell.

"But if we find ourselves in a situation where Ferrari is fighting for victory in the championship, then our drivers are well aware of the rules of the game," he said.

(GMM) Niki Lauda has credited Ferrari's technical boss for the boost in performance enjoyed by the Italian team in 2017.

Earlier, the F1 legend and Mercedes team chairman said Ferrari's recent slump was because it was relying too heavily on haphazard Italian engineers.

Told that the fact Mattia Binotto is now in charge of the technical team contradicts his theory, Lauda smiled: "Not at all.

"You consider Binotto to be Italian? Actually he is Swiss, and it shows.

"Ferrari works now because there is a Swiss who organizes the Italians, making them work but leaving them free to express their imagination and ideas," he told La Repubblica newspaper.

Lauda said Binotto's contribution may even be bigger than that of team boss Maurizio Arrivabene, because the reason Ferrari has stepped up in 2017 is technical.

"The key figure is Binotto, no doubt," said the great Austrian.

"At least it appears from the outside."

Interestingly, Binotto actually stepped up to his current role after Ferrari president Sergio Marchionne fell out with James Allison.

Allison subsequently moved to Mercedes, where he is now technical boss.

"I don't know what happened between Marchionne and James," Lauda said. "All I can say is that I am very happy to have him with us."

That is despite the fact that, with Allison departing and Binotto stepping up at Ferrari, it is the red team that has taken a big leap forward.

"The truth is that we were waiting for a strong Red Bull and instead we found a strong Ferrari," said Lauda. "At the moment Red Bull are going nowhere."

And he said the respective Mercedes and Ferrari cars are currently very closely matched.