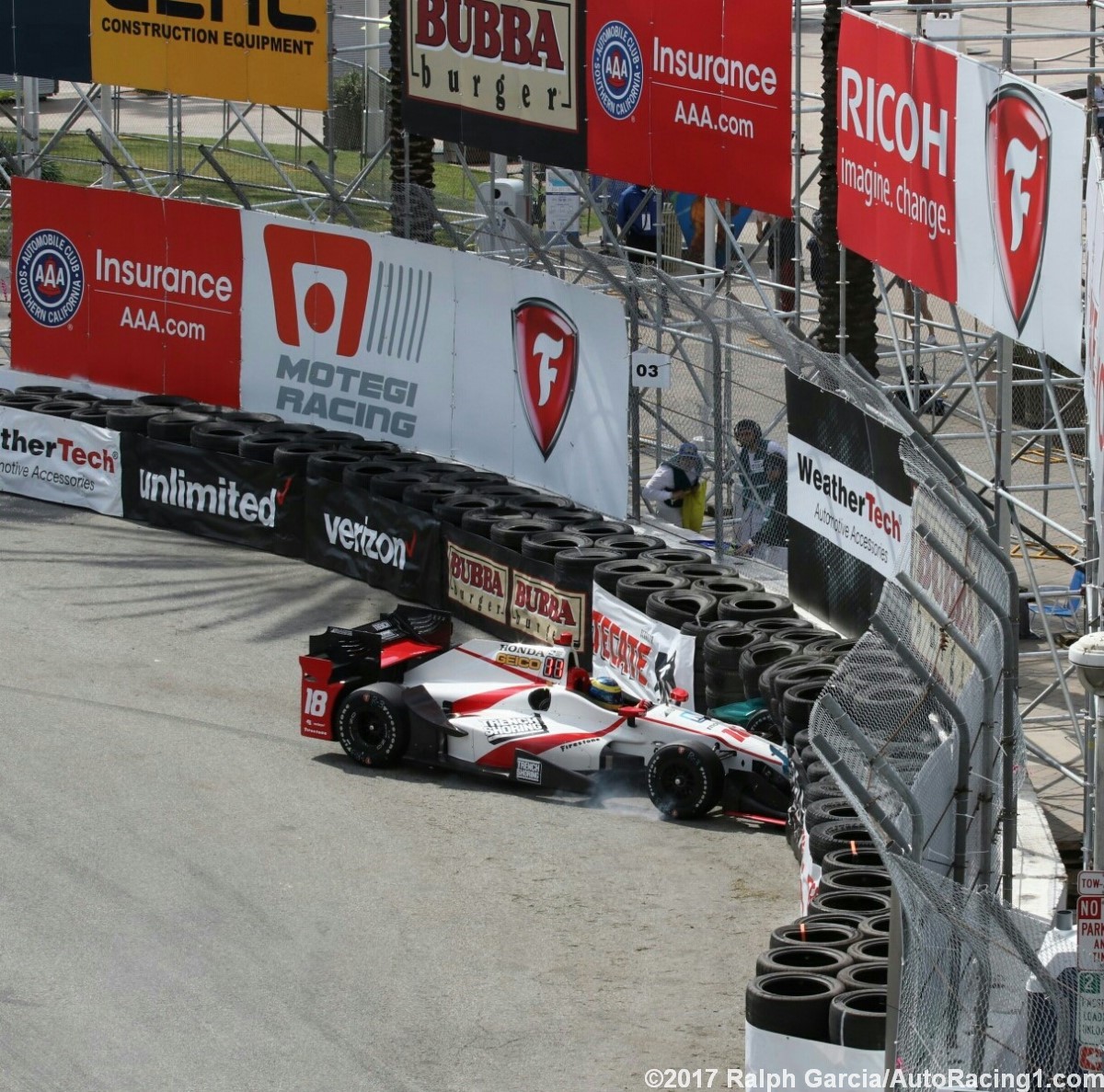 Good morning from Long Beach. The weather is going to be perfect again today for the IndyCar race this afternoon.

Helio Castroneves, who has driven for Team Penske since 2001, easily captured the pole yesterday. Castroneves, driving with sponsorship from the Auto Club of Southern California, is now 4th on the list for the number of poles won in his career. Graham Rahal teased the Brazilian in the press conference yesterday by saying that having that many poles means he is old. And Castroneves just kept smiling.

There was little mention about St. Pete GP winner Sebastien Bourdais having a run-in with the tire barriers in practice yesterday, but the damage was minor and his Dale Coyne crew had the car repaired in time for qualifying. Bourdais was at or near the top of the speed charts until then, but still qualified a respectably 7th. Keep your eye on him Sunday.

We mentioned yesterday that the race will be five extra laps today. In past races here, most drivers have only pitted twice. The added laps were intended to add a third pit stop, but the drivers said if we have one caution and it will be a 2-stopper.

The drivers are talking about saving fuel when the yellows happen, but last year there were no caution laps in the race. And in 2016, there were only 4 laps of yellow. So we will probably see three pit stops during the race today.

The Toyota Grand Prix of Long Beach is the place to be today as the stars and cars of the Verizon IndyCar Series mix it up with the stars of Hollywood before the start of the 43rd running of the famed street race.

In addition to University of Southern California head football coach Clay Helton, who is serving as grand marshal, and two-time Super Bowl champion Julian Edelman (New England Patriots), who is riding in the Honda Fastest Seat in Sports with racing legend Mario Andretti, the following celebrities will be on hand as guests of Verizon IndyCar Series drivers:

Mickey Mouse, star of "Mickey and the Roadster Racers," will wave the green flag to start the race.

Earlier in the weekend, "Dancing with the Stars" professional Sharna Burgess visited with Hinchcliffe, her dance partner for Season 23 of the ABC hit show. NFL analyst Rich Eisen took a two-seater ride with Mario Andretti on Friday.