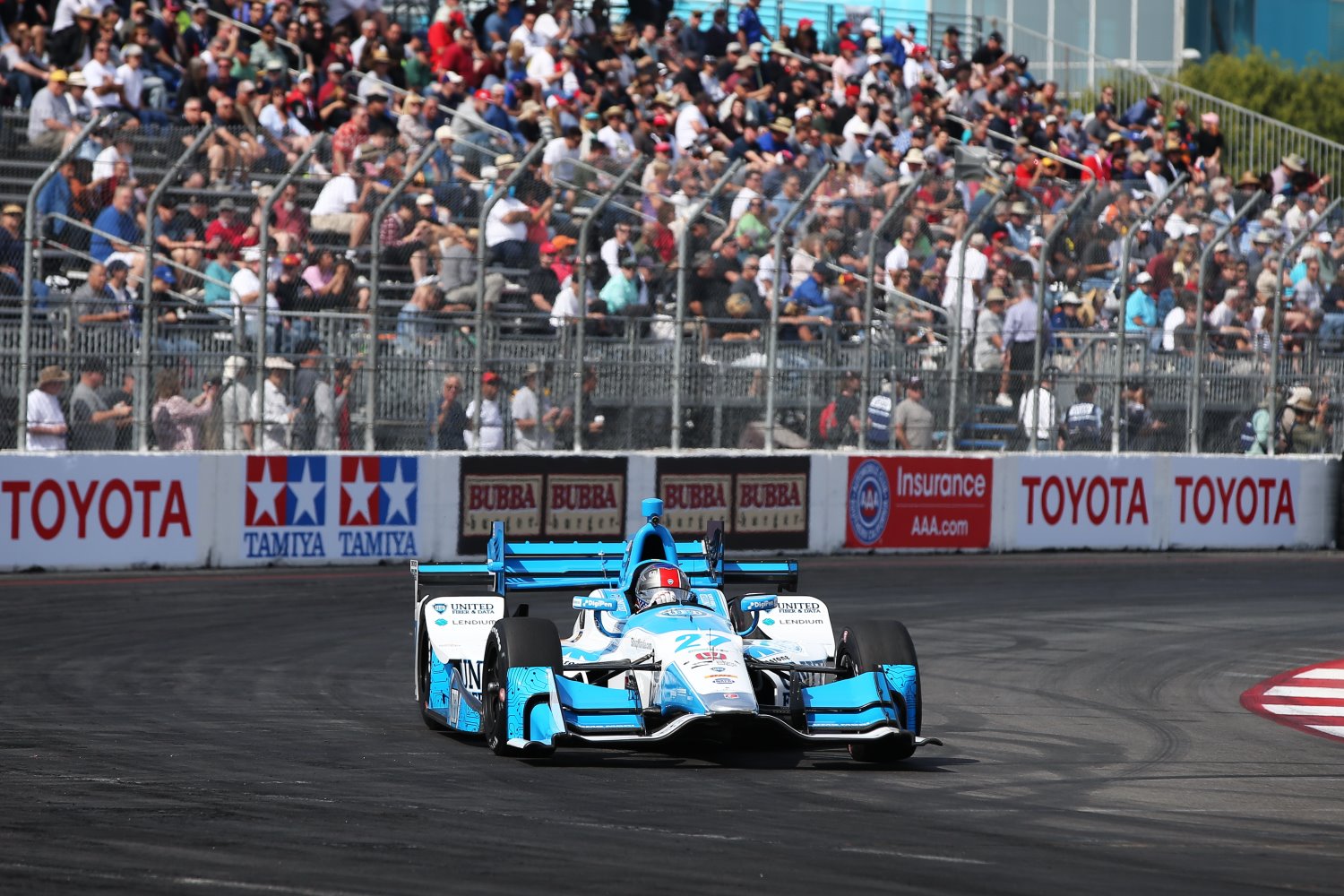 It is another beautiful morning at the Long Beach Grand Prix. The rain that was expected last night did happen. Once the cloud cover clears, today should be 70 degrees and sunny.

Yesterday's combined practice times had all past seven winners of the Long Beach race in the top eight positions. A confident Marco Andretti, driving the number 27 entry for Andretti Autosport, was the fastest Honda and the only non winning driver of this race in the top eight.

In the press conference held Friday afternoon, the young Andretti had this to say about his fast practice time. "I think this is as confident as I've felt and as fast as I've been in off-season testing. I don't remember being in the top two or top five the whole off-season. And in practice and in St. Pete, I think St. Pete didn't really show what the 27 had. We had those problems in qualifying, then it turned into a fuel race."

"I think we have the pace. Now the goal is to convert that to, you know, into a race win. But results, you know, finishing seventh in St. Pete was not a reflection of our pace. That's a good thing. Last year, it would have been, seventh is OK. There, we were a third or fourth place car. Here we're showing some pace. We need to convert it. That's the goal."

Andretti was reminded in the press conference that his grandfather, Mario Andretti, won his first race here back in 1977, back when it was a Formula One race. And the third generation racer for the Andrettis reminded the media that his father, Michael, also won his first and last race of his career at Long Beach. So Marco's goal is to score his third win this weekend on this historic track for his family.

The race has been extended from 80 laps to 85 laps for this Sunday. The race length had been 85 laps from 2009 through 2012. But for the last four years, the race was only 80 laps. This will make the teams strategize on whether the race will be a two or three stop race.

Will Power, driving the number 12 entry for Team Penske, replied when asked about what he thought that number of pit stops would be as a result of increasing the number of laps to 85 in the press conference yesterday. "It will take one yellow to make it a two-stop, I think. Even so, like seven laps or 10 laps. You still got to have people go through a big fuel save, or if there's a yellow, just be the same with the rules."

"Yeah, I don't know. You know, it's really enjoyable when someone does three, if you are the person that does three, you just out do everyone with one extra stop. That's a fun race. So I'm hoping it's like that."

Another change this season, which effects the Friday practice times, is the additional set of alternate (red) tires for every driver. This allows the teams to work on the qualifying setup with these tires before we actually get into a qualifying session. Scott Dixon, a four time IndyCar champion, was one of the drivers that suggested this change last season.

Scott Dixon, driving the number 9 NNT Data entry, had this to say about Friday practice. "I was obviously happy with the car this morning, but like I always say, practice doesn't pay anything for winning. In the second session we had a fast NTT Data car as well, but an untimely red flag caught us out on our fast lap which left us down the timing sheets."

Will Power, the 2014 IndyCar champion, also added his comments about the new tire rule and how it effected his practice session. "Yeah, you only get a set of reds for this one session. It's really important for qualifying. It's such a different tire, a lot softer. The car feels comfortable. We'll work on it. It kind of sucks if you're quickest because you don't get details, you know. Wish I was fifth or something, it would have been much better. You don't want to show people what you got too soon."

Sebastien Bourdais, four time champion and winner of the St. Pete race, added his take of the red tires. "I was really surprised and very happy about the way we unloaded this morning. The No. 18 Trench Shoring Honda was hard to drive but it was quick, and then it just felt like the track was starting to get away from us a little bit. We started losing track of balance and the way things evolved. We've slipped back a little this afternoon and we don't seem to be as strong out there on the reds (Firestone alternate tires) so we are going to have to work on that a bit. Long Beach is a tough place because it evolves very rapidly and you can only get a few changes in, so we're going to have to think long and hard about it tonight and see what we're going to do."