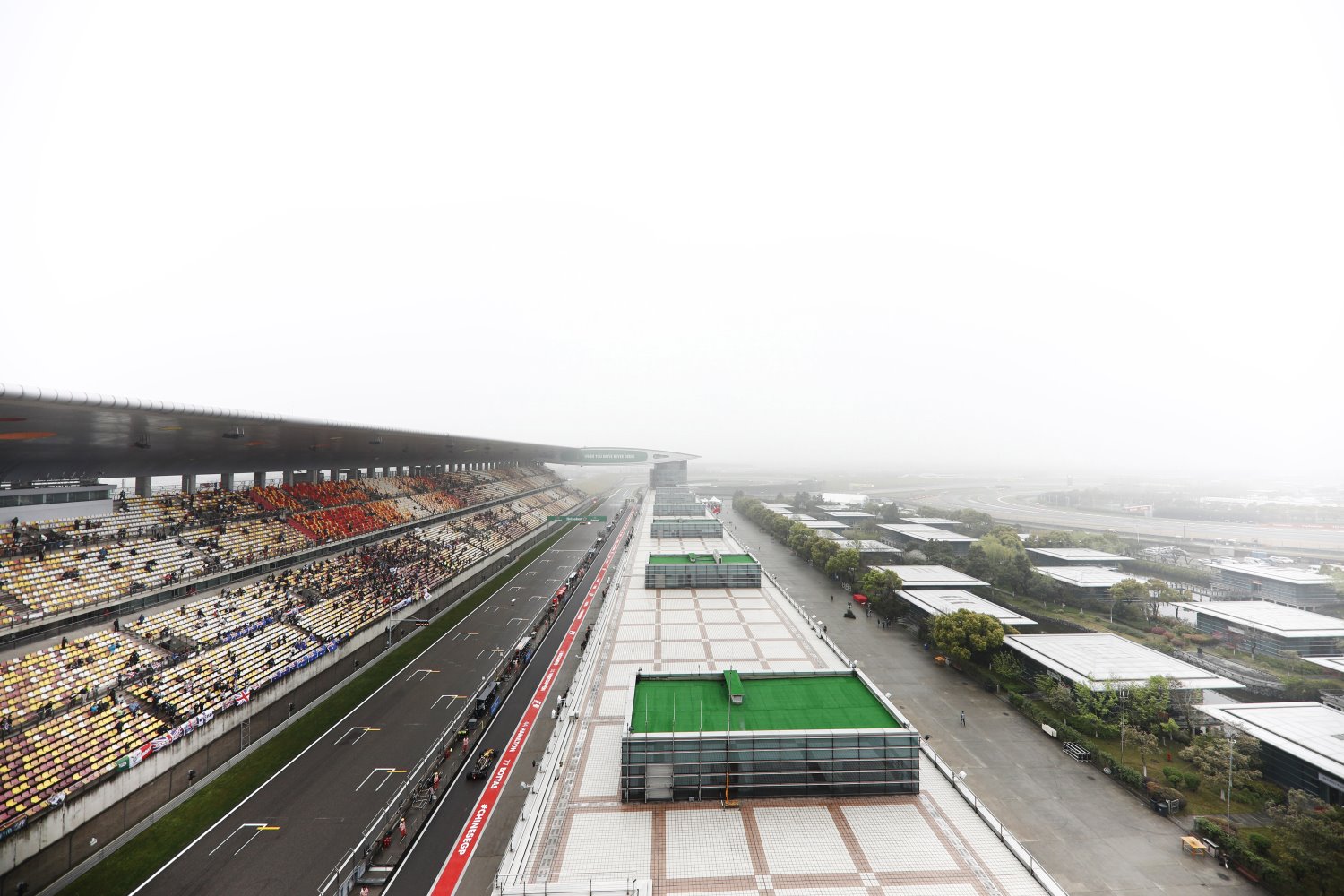 On Friday, precious little track action took place because rain, mist and smog made it impossible for the medical helicopter to fly.

"The hospital is 38 kilometers away," said steward Paul Gutjahr. "Even with a police escort, it would take more than an hour (by ambulance)," he told Auto Motor und Sport.

The German report said another hospital is actually just 5 kilometers from the Shanghai circuit, but it does not meet F1's neurosurgery standards.

So with the weather looking set to worsen rather than improve, bosses met frantically to consider rescheduling qualifying and the race, but quickly ruled it out.

Many expressed disappointment with that, especially as the weather on Saturday is better, while the problematic low clouds could return on Sunday.

"I think the drivers just want to race," McLaren chief Zak Brown said. "They don't care if it's Friday, Saturday or Sunday."

He described the TV spectacle on Friday as "terrible".

"What we need moving forward is a contingency plan when this happens," said Brown.

Triple world champion Lewis Hamilton agrees, saying the situation in China is actually a "blessing in disguise" and a test for Liberty Media to come up with a "creative" solution.

But at the moment, qualifying and the race are scheduled to take place as originally scheduled, and Saturday morning practice took place as scheduled.

"The FIA believes that even if Sunday is going to be rainy, the clouds will no longer be so low and the helicopter will be able to fly," said Toro Rosso driver Carlos Sainz.

"I hope so, because it would be a shame to come all the way to China and not race because of weather."

Amid a struggle to merely survive financially last year, the team inked a deal to use Ferrari's 'old' 2016-spec power unit in 2017.

Sauber has subsequently been bailed out, but Kaltenborn played down the chance the team could now switch to Ferrari's impressive latest engine.

"No, we're not planning that," she said in Shanghai.

"But it's also too early to say how much we are losing, because Australia is not the most representative track.

"We will have to wait a few races and then we will see how far the gap is."

Kaltenborn said Sauber will have a "major update" for the chassis in Barcelona.

(GMM) Secret plans for an alternative to the controversial 'Halo' cockpit protection system have been leaked in the Shanghai paddock.

Little is known about the device except that it is called 'Shield', and has been designed to address the issue of head protection for the drivers without spoiling the look of the cars.

Germany's Auto Motor und Sport claims the 'shield' is a clear screen that is flatter than the Red Bull 'Aeroscreen', which like Halo was also deferred last year.

Unlike the earlier proposals, it is believed the shield would not stop a flying wheel from hitting the driver, but is instead designed to fend off other debris.

The drivers were told of the plan in the China GP briefing, with the FIA seeking majority support by the end of April.

"The FIA is trying to find a compromise between safety and the appearance of the cars," said Toro Rosso driver Carlos Sainz.

His teammate, Daniil Kvyat, also commented: "It is hard to draw any conclusions because I understand that it is just a project.

"Honestly, I don't believe any of this is necessary – formula one is safe enough."

(GMM) Zak Brown says McLaren is not setting a deadline for Honda to take a big leap out of its current engine crisis.

The once-great British team's new boss in Shanghai rejected suggestions he has been in talks with Mercedes, amid rumors McLaren could soon dump Honda.

"No, we are working together," Brown is quoted by Auto Motor und Sport, even though he has been spotted talking with Mercedes engine boss Andy Cowell in China.

"We are all keen to move forward, but we have not set ourselves a 'day x' on which everything must be good. That wouldn't help us," he insisted.

"I said before the tests that we need to be better than in 2016, and we did not succeed in that. Now we have to work hard to get there, and take the next step for 2018 as well."

Brown said one bright spot is that the McLaren chassis itself is good.

"We had thousands of targets on the chassis side, and we met 99 per cent of them. We are confident that we have a very good racing car," he said.

That is the news from the sport's new commercial chief Sean Bratches, following earlier news that Malaysia will actually drop off the new schedule.

But the current count of 20 races will inch up to 21 in 2018, with the return of both Paul Ricard and Hockenheim.

"With Germany and France, we will have a total of 21 exciting events in 2018 that we can all look forward to," Bratches is quoted by Auto Motor und Sport.

(GMM) Toto Wolff has revealed that Sauber driver Pascal Wehrlein actually fractured a bone in his back in his race of champions crash during the winter.

Rumors are swirling around the absent German driver in Shanghai, after he missed Australia, China and possibly Bahrain next weekend with an apparent lack of fitness.

"We decided to give Pascal a break with ten days of additional training," Wolff, who oversees Mercedes' driver development program, told the German broadcaster RTL in Shanghai.

"But I'm assuming that he will be in the car in Bahrain," he added, referring to Wehrlein's role as race driver for Sauber in 2017.

Wehrlein has been replaced for now by Antonio Giovinazzi, the reserve driver for Sauber's engine partner Ferrari.

But Wolff played down claims the Wehrlein story has more to do with politics than the 22-year-old's actual injury.

"In the accident in Miami, Pascal sustained a compression fracture of a neck vertebrae," the Austrian revealed.

"He is lucky not to have hurt himself further, but he could hardly move for several weeks and had to wear a support. During this time, of course, he could hardly train, which is why he was simply not strong enough to drive these cars over a race distance," added Wolff.

Amid the latest media report about a club brawl, Frans Verstappen – who is the father of Max's dad Jos – told De Telegraaf newspaper that he sought out a meeting with the Red Bull chief.

"I took this step in Max's interest," Frans said, "because I fear for his career.

"The only thing I wanted to achieve was that Red Bull intervenes to protect Max from the constant misery caused by his father," he added.

He said: "I made it clear that Red Bull has a contract only with Max, and everything else that happens in the family is not our business."

(GMM) Fernando Alonso has agreed to hold off potential talks with other teams until the summer.

That is the claim of McLaren chief Zak Brown, following a dinner meeting in Shanghai attended by himself, Eric Boullier, Alonso and the Spaniard's manager Luis Garcia Abad.

Alonso's contract runs out this year.

"We have agreed to speak in the summer," Brown is quoted by the Spanish sports daily Marca. "We agreed this even before the preseason began.

"He just wants to win races, it's the only thing for him, and we want him to continue.

"I don't know if he has any offers – I don't check his cell phone – but we have an agreement that he's not going to commit to anyone until we have our talks," Brown added.

Ecclestone could attend next two races

The 86-year-old has been absent ever since Liberty Media decided to replace him for 2017 and beyond by Chase Carey, Ross Brawn and Sean Bratches.

But we have already reported that Ecclestone will be back in the paddock in Bahrain next weekend.

And the Briton could also be in Russia, the next race on the calendar after that.

The governor also revealed that despite having a new race deal at Sochi through 2025, he has "something to discuss" with Ecclestone's successor Carey.

After weather issues badly affected Friday practice, and with more low cloud forecast for Sunday, one proposal was to stage both qualifying and the race on Saturday.

"That the race would be moved to Saturday was close," former F1 driver and this weekend's driver steward Salo told the Finnish newspaper Turun Sanomat.

"When we looked again and the weather for Sunday looked better, it was decided no changes would be made," the Finn added.

The FIA has reportedly made medical arrangements so that even if the rescue helicopter again cannot fly on Sunday, the Chinese grand prix can still take place.

(GMM) Sauber driver Pascal Wehrlein says he is hopeful he will be fit enough to race in Bahrain next weekend.

The German is not in China at all, after he sat out the season opening Australian grand prix with a lack of fitness.

Wehrlein's absence triggered wild speculation that the 22-year-old is either more seriously injured, or that he is the victim of a political struggle between his bosses at Mercedes and Sauber's engine supplier Ferrari.

But Mercedes' Toto Wolff told Bild newspaper: "Of course you could infer that this is a political struggle.

"But the fact is that we have a good relationship with Ferrari and we would never get into it over junior drivers," he insisted.

"It's a great thing for Antonio Giovinazzi to get a chance, and Pascal will be back," Wolff added.

Wolff confirmed in China that Wehrlein lost his fitness due to fracturing a vertebrae in his race of champions crash during the winter.

"He is training hard now to make his debut race for us in Bahrain or Sochi," she said.

As for the conspiracy theories, Kaltenborn insisted: "It's only about training and nothing else.

"Some people should be quiet rather than speculate wildly. His spine was extremely compressed in Miami so the doctors initially gave him an absolute training ban.

"He is now taking the time he needs," she added.

Wehrlein backed the claim that he is training hard to return.

"The problem is that formula one does not work like football. After an injury, you can't build yourself back up slowly in a formula one car," he said.

"The most important thing for me is that I can now train very hard to get my performance back to 100pc so I am well prepared for my first full weekend with Sauber.

"I hope that this will be in Bahrain, but at the latest I should again be in top physical condition for Russia," added Wehrlein.