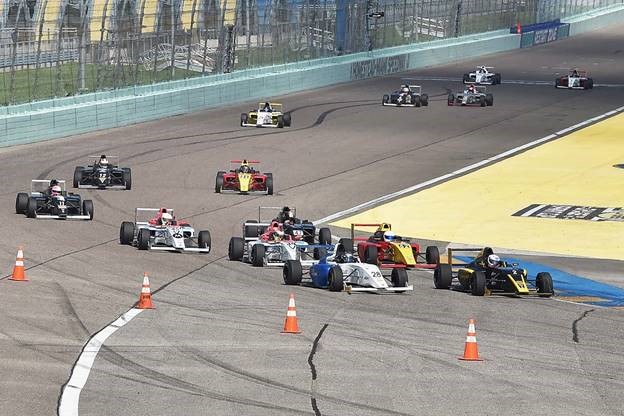 With only one day before its season debut at Homestead-Miami Speedway, the entry list for the Formula 4 United States Championship Powered by Honda continues to gain new competitors. Jett Noland of Groveland, Florida, is the latest karts-to-cars entry to join the F4 U.S. field.

The professional driver development series returns to Homestead-Miami Speedway April 8-9 with more than double its grid size from its inaugural season finale at the legendary Roval last October. The field is anticipated to swell from 16 entries to 33 competitors representing 11 states, eight countries on five continents.

“We are extremely pleased to be returning to Homestead-Miami Speedway to kick-off our 2017 season," said SCCA Pro Racing Vice President, Steve Oseth. “The high-banked turns at Homestead provide a unique opportunity for our drivers to develop drafting skills that will be important for them as they progress through the sport. Doubling our grid size is a statement to the cost-efficiency of our championship. Campaigning in an American-made Crawford F4-16 chassis, powered by a Honda Civic Type-R engine manufactured in Ohio and running on long lasting Pirelli tires, F4 U.S. is the most economical series in the United States for drivers to progress from karts to cars. “

Noland connected with Cape Motorsports after a capturing three karting titles and finishing third in the Skip Barber Karts to Cars Shootout. He finalized the grid for the winningest team in American junior open-wheel racing which includes returning competitors Kyle Kirkwood of Jupiter, Florida, and Steve Bamford of Toronto, Canada. Series newcomer Mathias Soler-Obel of Bogota, Colombia, was also added to the Cape roster in the offseason.

“I would really like to thank Cape Motorsports for giving me the opportunity to join the team," said Noland. “I believe that if I work hard under the guidance of IndyCar Rookie of the Year and Rolex 24 Daytona winner Rafa Matos, I can live up to their expectations."

Last year, Cameron Das of Brooklandville, Maryland, ran away with the Homestead-Miami rounds. Das finished first with more than a nine second lead in each of the three Homestead races. The F4 U.S. Championship served as a gateway from karts to Formula 3 for the inaugural season champion. Das will compete this season in the BRDC British Formula 3 for team Carlin, opening the field for new or former competitors to capture the top podium spots.

Second-year F4 U.S. driver Kirkwood is looking to takeover Das’ reign. Kirkwood earned third in the overall inaugural championship, capturing six second place podium finishes, two third place finishes and one victory. The young Floridian won the prestigious Team USA Scholarship in 2016 which allowed him to compete abroad at the Formula Ford Festival in Brands Hatch, England, and the opportunity to race for the Walter Hayes Trophy at Silverstone in the off-season. Kirkwood finished in the top 10 at Brands Hatch and fourth in Silverstone.

“Immediately after the F4 season I found myself in England racing for the Team USA Scholarship, which I owe F4 U.S. a lot of credit for," said Kirkwood. “That was unlike any experience I’ve had and was the best preparation I could ask for going into the 2017 season. I'm very focused on the top podium spot. Cape Motorsports and I have had a couple very productive tests and I couldn't be happier with the team and the car for the beginning of the season."

“I am thankful for Group-A Racing for allowing me to compete for half the season," Czaczyk said. “The field is going to be very competitive and a lot tighter than last season. I am confident in my team. I hope to return the favor with a win this weekend at Homestead."

Due to a previous commitment, Czaczyk will compete in only three of the six F4 U.S. events for Group-A Racing.

Baltazar LeguizamÃ²n of Buenos Aires, Argentina, is also a returning force hungry for a win. LeguizamÃ²n experienced his best battles last season at Homestead-Miami Speedway, advancing from 13th to sixth place in championship points during the final event. The unprecedented performance earned LeguizamÃ²n the Catherine Crawford Most Improved Driver Award at the end of the season.

“I want to improve on the results I finished the season with last year," LeguizamÃ²n said. “We have been testing and conditioning all offseason to make that happen."

“Only one third of the Homestead entries are returning inaugural season competitors, the rest are rookies," said Oseth. “With a field this large and fresh, it’s definitely going to be an exciting weekend of racing."

The F4 U.S. Championship joins the Trans Am Series presented by Pirelli for a high-energy SCCA Pro road racing weekend. General admission tickets are available for purchase in advance of the event at HomesteadMiamiSpeedway.com for $10 on Saturday and $15 on Sunday. Two-day passes can also be purchased online for $20.

General admission tickets will be available at the gate on the day of the event. Infield tickets are $15 on Saturday and $20 on Sunday. Two-day passes purchased at the gate are $25. Children 12 years and younger are admitted for free on both days. Parking is free all weekend and will be located in the infield on Main Street and Road Course South (east portion).

For an event schedule and entry list visit F4USChampionship.com.