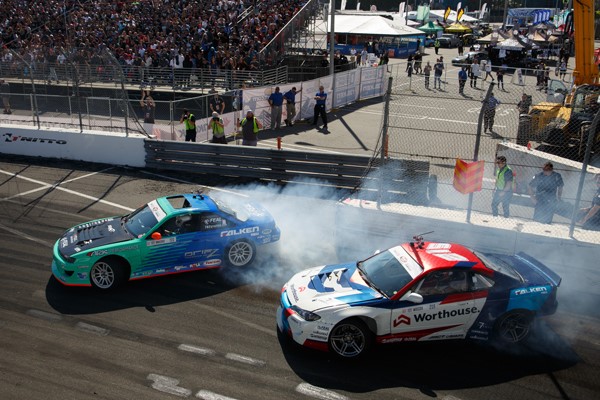 “This was a triumphant return for our six-car Team Falken operation and for James Deane," exclaimed a jubilant Steven Wong, Falken’s Supervisor of Motorsports & Events. “I’m so excited for James, who is running full-time in Formula Drift with Falken after competing on a limited schedule nearly seven years ago."

“Our Falken AZENIS RT615K+ tire has clearly demonstrated its strength in ‘road gripping power’ here on the punishing streets of Long Beach, as well as at other events such as the Optima Ultimate Street car and on numerous autocrosses around the country," added Jonathon Bradford, Falken’s Manager, Motorsports & Events. “Falken is determined to prove that our tires can successfully take on all challenges on all venues."

Of the 30 cars that entered the Long Beach round, 25 qualified, including Falken drivers Wiecek in 9th; Matt Field, 11th; Justin Pawlak, 14th; and Daijiro “Dai" Yoshihara, 18th. Additionally, Falken Tires entertained more than 100 dealers from the Southern California market, and Falken spokesmodels were present to sign posters and assist enthusiasts with the tire brand’s engaging education center where the public can take a survey and learn about Falken’s light truck and passenger car products.

“Coming back after seven years, it’s just crazy," declared Deane. “You’re battling the best guys in the world, so qualifying second already finished the weekend for me. I was super happy with that. Because of that result, the pressure was off a little bit since we could show we were competitive in the world’s best drifting competition."

“I pushed 110% into the top 4," Deane added, “and into the finals, I was just having fun. I put down the best run I could and just managed to get the win. It’s great to be back on board with Falken. The grip on the tires was just awesome. Bring on Orlando!"

Orlando Speed World in Orlando, FL, hosts Round 2 of the 2017 Formula Drift Pro Championship Season where the focus is again on “Uncharted Territory." The track continues to challenge even the most seasoned veterans when the action takes place on April 28-29.