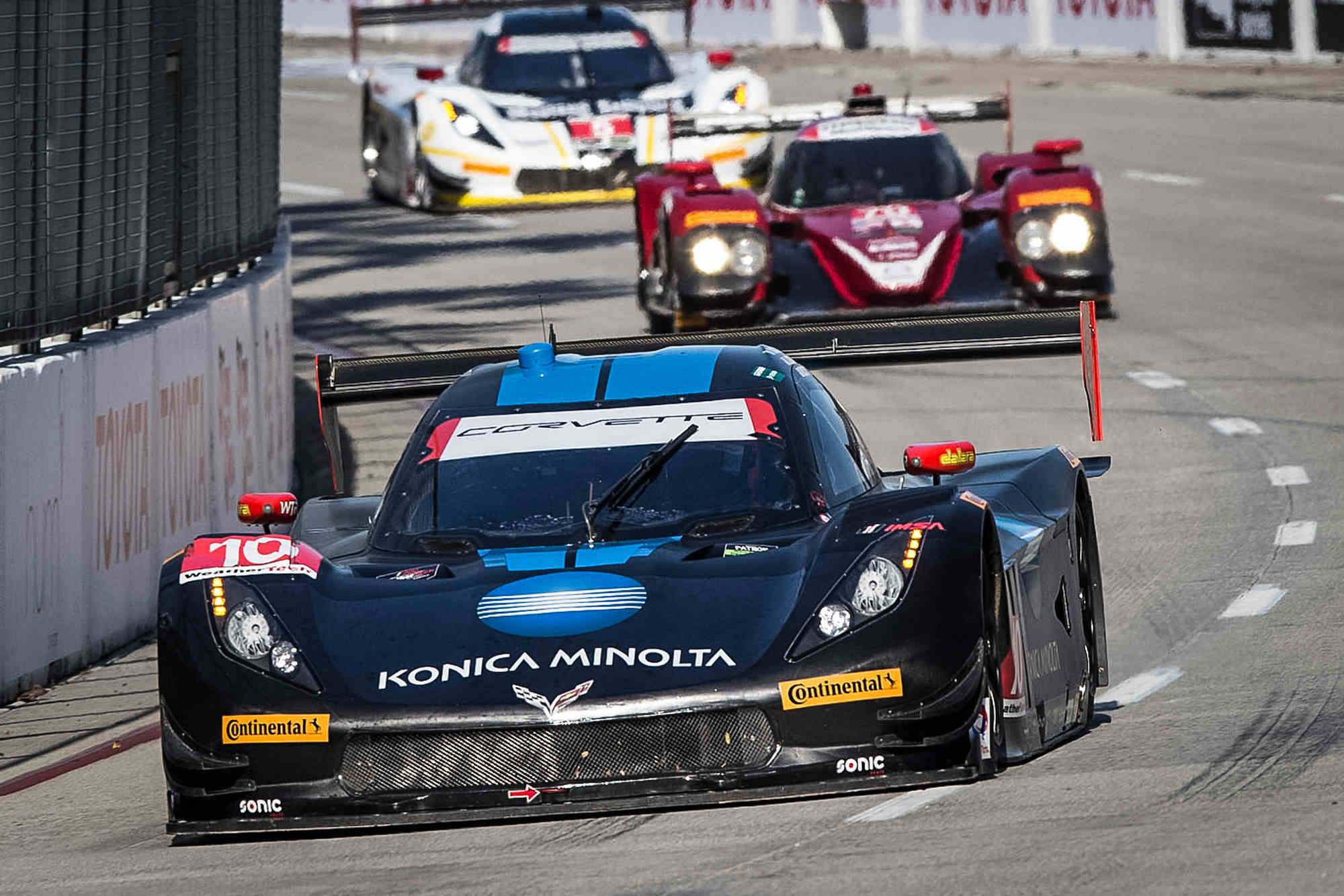 The BUBBA burger Sports Car Grand Prix at Long Beach on Saturday, April 8 will feature a full IMSA WeatherTech SportsCar Championship paddock, with 35 cars – comprised of 13 different automotive manufacturers – on the entry list (LINKED HERE) for Round 3 of the 2017 season.

Transitioning from the two longest races of the season, the 100-minute sprint race is one of the shortest races on the WeatherTech Championship calendar and will be broadcast live on FOX, with coverage beginning at 4 p.m. ET / 1 p.m. PT and continuing through the checkered flag and post-race interviews.

Having won the opening two races of the 2017 season, the No. 10 Konica Minolta Cadillac DPi-V.R returns with its pair of full-season drivers in brothers Ricky and Jordan Taylor, who also won at Long Beach in both 2015 and 2016. However, the nine other Prototype teams will be pushing hard to try and spoil the Taylors from winning three races in a row.

Perhaps charging most of all will be the two Prototype entries from Mazda Motorsports. Long Beach, Calif. is in the backyard of Mazda North American Operations, located in Irvine, and the team will be keen on making a strong impression. Since the 2016 season, Mazda';s prototypes have shown a very competitive pace, nearly winning overall on several occasions, but have also struggled with reliability in some instances.

"While Mazda';s true homecourt advantage comes at Mazda Raceway Laguna Seca each season, being able to race just down the road from our North American headquarters means a great deal to us," said Mazda North America';s Director of Motorsports John Doonan. "Many Mazda employees and enthusiasts join us for the Long Beach festivities."

Doonan not only has faith in his drivers (Jonathan Bomarito, Tristan Nunez, Joel Miller and Tom Long), but in the Nos. 55 and 70 Mazda RT24-P cars as well, the manufacturer';s example of IMSA';s Daytona Prototype international (DPi) formula. He looks forward to showcasing the concept to the California fans.

"The true tie-in comes from the fact that our R&D engineers often use the streets and roads all around Long Beach and Southern California to test and refine the driving experience of our entire road car line-up," Doonan explained. "We hope to bring success to the brand with the new DPi package in its maiden visit to the streets of Long Beach."

Mazda will not be alone in challenging for the win, though. After coming so close to victory at Daytona and Sebring, the No. 5 Mustang Sampling Cadillac DPi-V.R with drivers Joao Barbosa and Christian Fittipaldi will be providing heavy pressure, as will their teammates Dane Cameron and Eric Curran in the No. 31 Whelen Engineering car.

Rounding out the DPi representatives is Tequila Patron ESM, which fields a pair of Nissan DPis in its 2017 return to full-time WeatherTech Championship competition. In addition to the seven DPi race cars, a trio of Gibson V8-powered LM P2 cars – Visit Florida Racing';s Multimatic/Riley, a Ligier run by PR1/Mathiasen Motorsports and an ORECA fielded by JDC-Miller Motorsports, a team that won Long Beach last year in the Prototype Challenge (PC) class – are ready for battle in Long Beach. LM P2 cars also have proven to be competitive early this season with a pole position at Sebring and a podium result in the Daytona season opener.

In the GTLM class, Porsche will look to repeat its 2016 victory on the 11-turn, 1.968-mile street circuit to capture its first win of the season. Neither the No. 911 Porsche 911 RSR of Patrick Pilet and Dirk Werner or the Porsche GT Team sister entry, the No. 912 of Kevin Estre and Laurens Vanthoor, will have an easy time of it, however.

Ferrari and BMW have also yet to stand on the top step of the podium in 2017 and are both keen to do so. The No. 62 Risi Competizione Ferrari 488 GTE of Giancarlo Fisichella and Toni Vilander was a constant threat in the closing hours of both the Rolex 24 and the Twelve Hours of Sebring, and it was a BMW Team RLL BMW M6 on the GTLM pole last year in SoCal.

It goes without saying that 2017 winners Ford and Chevrolet also will be top contenders. Ford Chip Ganassi Racing took the win at Daytona with one of its four Ford GTs and was within just seconds of the Sebring-winning Corvette C7.R. For Long Beach, Ford and Chevy will field two cars apiece to contend for the win.

Eight of the 13 manufacturers on the entry list can be found in GTD alone, with 16 cars on the list for Long Beach. The race will prove to be a unique challenge for most of the competitors, as 2017 represents GTD';s first outing at the track.

The No. 54 CORE autosport Porsche 911 GT3 R of Colin Braun and Jon Bennett surely will be a frontrunner, as the team itself raced at Long Beach as recently as last year, albeit in a PC car. The Sebring-winning Riley/Keating team is not one to count out either, as the No. 33 is determined to take two victories in a row for Mercedes-AMG.

Attempting to pick a GTD winner is nigh impossible though, as on top of Lexus, Mercedes and Porsche, five additional manufacturers will be fighting for the class win. Acura, Audi, BMW, Ferrari and Lamborghini all have a shot to take home the prize, and everyone will be watching when the green flag drops on FOX.

Practice for the WeatherTech Championship begins the morning of Friday, April 7, with qualifying set to begin at 8:20 p.m. ET / 5:20 p.m. PT that evening.