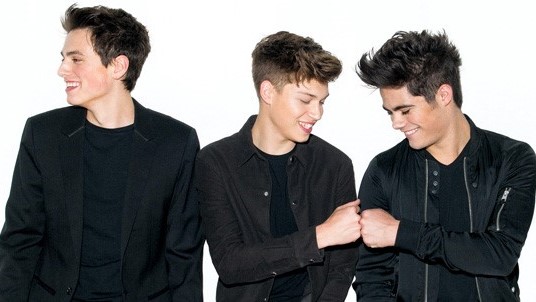 Billboard-charting pop group Forever In Your Mind will perform the national anthem before the start of the INDYCAR Grand Prix on Saturday, May 13 at the Indianapolis Motor Speedway.

Forever In Your Mind (FIYM), comprised of band members Ricky Garcia, Liam Attridge and Emery Kelly, has amassed more than 30 million video views from its self-titled debut EP released by Hollywood Records in 2016. The stylish trio also has sold out concerts nationwide and has a combined global reach of more than 2 million followers on social media.

The announcement was made via social media today, after the band members took a high-speed thrill ride through the Toyota Grand Prix of Long Beach course and met with Verizon IndyCar Series star Josef Newgarden of Team Penske.

"The harmonies of Forever In Your Mind will be on full display during their performance of 'The Star-Spangled Banner' before the INDYCAR Grand Prix," said J. Douglas Boles, Indianapolis Motor Speedway president. "Fans of all ages will appreciate and enjoy their rendition, and we look forward to welcoming them to IMS at the start of the Greatest Month in Racing."

Said FIYM's Garcia: "We can't wait to perform the national anthem at the Racing Capital of the World at the start of May. Jumping in an Indy car was seriously epic; these guys go fast and deal with a lot of pressure as they navigate a course. I think we'll stick to singing for now, but it was awesome being a race car driver for a day!"

FIYM will be releasing new music next month. The new single shows the band's growing musical maturity while continuing to feature its signature harmonies.

FIYM's lead role in Disney Channel's "Road to the Roxy" led to a sold-out headline gig at L.A.'s famed Roxy nightclub in summer 2016. The band also presented at the Radio Disney Music Awards and participated in Flo Rida's opening number at the 2016 Teen Choice Awards.

Television also was a catalyst for the formation of FIYM. Long Island, New York, native Kelly auditioned for the television talent competition, "X Factor," in 2013, where he met Garcia, a Texas transplant living in Los Angeles. They became friends and formed FIYM, which became a trio when Kelly's cousin Attridge moved from Long Island to Los Angeles.

Visit www.IMS.com to purchase tickets for the fourth annual INDYCAR Grand Prix on May 12-13 and the 101st Running of the Indianapolis 500 on Sunday, May 28, and for more information on the entire Month of May schedule at IMS. Kids 15 and under are free to all 2017 racing events at IMS when accompanied by an adult General Admission ticket-holder.