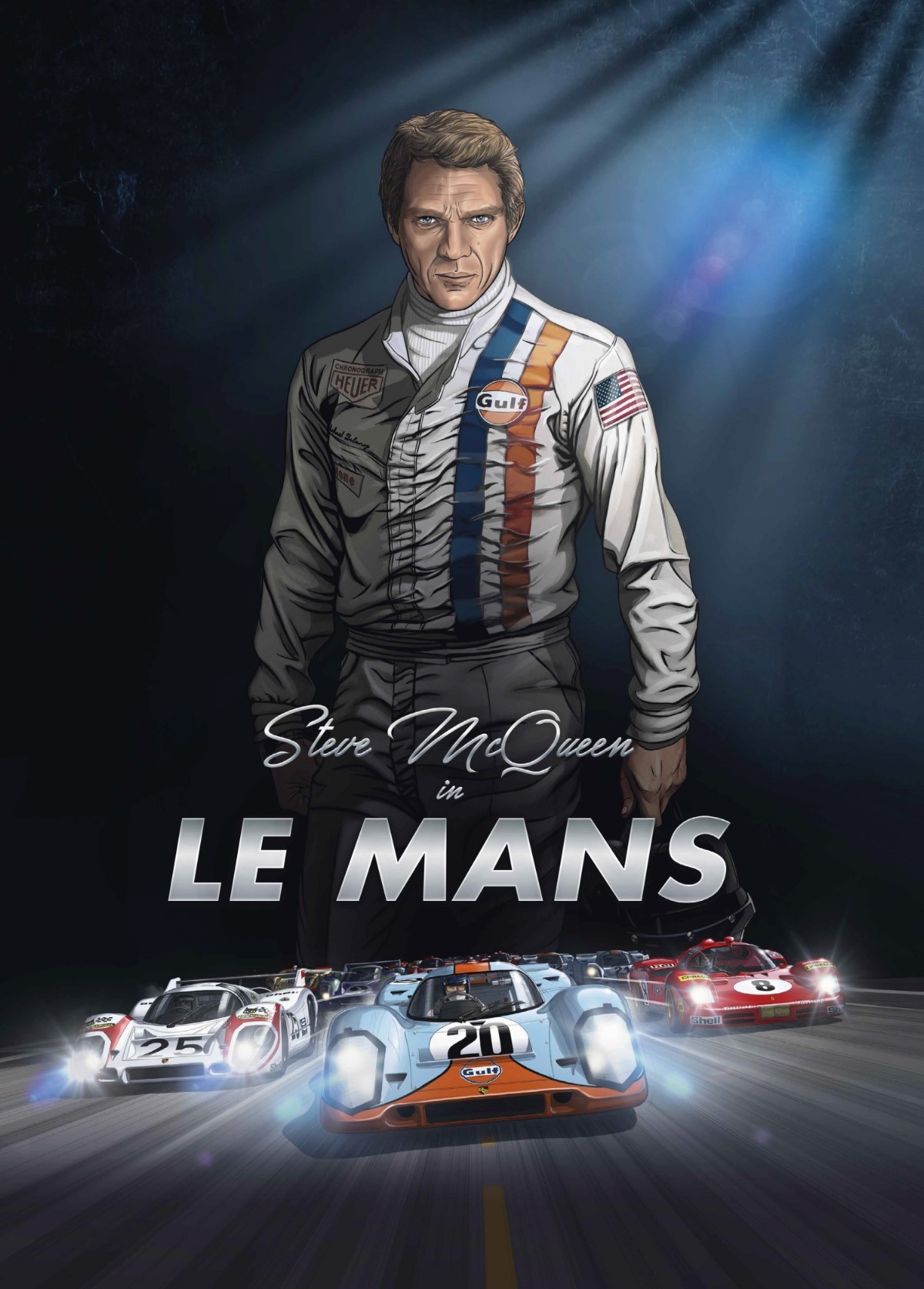 1. Sandro Garbo, you have a movie star’s last name, but drawing is your passion. How long have you been drawing and how did this graphic novel come about?

I’ve been drawing for as long as I can remember. When I was a child, my parents even let me draw my heros on my bedroom walls. I loved it. I read classic Belgian comics and the Marvel superheroes. I was a big fan and I drew them everywhere, all the time. Later on, I would have loved to take classes at the Florence Academy of Art, but it just wasn’t possible.

There has always been this little voice inside of me saying, “Be patient. One day you’ll create something artistic."

I painted my friends’ cars for years, and then in 2013, Steve McQueen appears in my dream and tells me to create a graphic novel about his movie to keep the myth alive. The next day I set to work. I assembled a team and it became a new mission in my life.

2. There is a movie and it has achieved cult status: what does illustration add to the story?

I don’t think anyone ever filmed a car race in such a realistic and intense way. But watching it, I saw more than just the race. I pictured the panels we could create and they were so stunning that I only wanted one thing: to create and share them.

Today, when I look at the result, not only does it have the same energy, but this large format allows everyone to contemplate the illustrations at their own pace, admiring the pages, panels and every detail. That’s what illustration adds.

3. Normally, the storyboard is created before the movie, but you do the opposite, right?

That’s true. But we never sought to be like everyone else. This graphic novel is, at its core, an enthusiast’s dream. We didn’t analyse the market or estimate the sales.

We just tried to make the most beautiful graphic novel about car racing, and, today, we are thrilled to see it completed. For us, that’s already a huge achievement.

4. We know the adventures of racecar driver Michel Vaillant, did they inspire your graphic novel?

Not really. Like most children, I read Michel Vaillant. But when I dreamed up the pages, it’s really the movie that was my source of inspiration. This graphic novel is more like a work of art than a comic.

Actually, a lot of people told us that we were kind of crazy. We spent a tremendous amount of time recreating each detail: the cars, the circuit, the 1970s atmosphere. And heritage officials from the ACO – owner of the 24 Hours race – controlled each panel to ensure that the fans recognize every original details.

5. What fascinates you about this legendary race?

Above all, 24 Hours of Le Mans is a matter of mental fortitude and resilience. Imagine… you need to drive a car for 24 hours, full tilt, day and night, in the rain, with only a couple hours of sleep. And to top it off, you need to protect your car to reach the finish line. It seems almost impossible.

And then there’s the atmosphere of the race. I recommend everyone go to Le Mans at least once. The start, the night race, the suspense, the village. It’s unforgettable

My very first car was a 1978 Triumph Spitfire. I had just turned 19 and was looking for a car on a tight budget. I saw it and left with it straight away. Since I didn’t have enough money to buy it and the seller didn’t want to lower his price, I left him the radio, tool kit and spare tire! But leaving without that car was out of the question.

I had some great times in that car. I drove it all four seasons. And since then, I’ve almost always owned a classic car.

7. What fundamental changes in racing have occurred since 1971?

I’m really not an expert, and I was still in diapers back then. I would say that, today, there is much more technology. In 1970, the Porsche 917 and Ferrari 512 were going 360 km/h without any electronic assistance. And a great deal of courage was required to attack the HunaudiÃ¨res straight, especially in the rain.

8. Nearly half of a century since the film, how do you avoid nostalgia?

Why avoid it? People like to remember the good times. And remembering also gives us some perspective in the way we view life.

In our case, we drew inspiration from a film brought to life by a true enthusiast, Steve McQueen. And you have to admit that he brought realistic car racing to life like no one else. That’s why it’s timeless.

9. How were you able to get the various permissions to create the remake as a graphic novel?

I had the good fortune of being in the same hospital room as Pascal Favre and he became my friend. Today, he is the CEO of Garbo Studio and he fought for all the permissions. He always says that it was the team’s workmanship that opened all the doors, but we all know it’s because of him that our dream became a reality.

10. Occassionally disheartened from the long creation process, is endurance a must?

3 years is a long time for a project like this. And that is surely the reason why, before us, no one else had created it.

I nearly gave up at the end of 2015 because there was still so much to do. And then the tragedy in March 2016: Florian, one of our artists, sadly passed away in an accident. The entire team was in shock.

And it was this tragedy that strengthened our resolve. We no longer had a choice. We needed to finish it, in memory of our friend.

11. What are some of your greatest wishes or projects?

At the moment, my only wish is that people who read our graphic novel have stars in their eyes.

And if our experience could motivate other people to pursue their dreams, that would be wonderful.