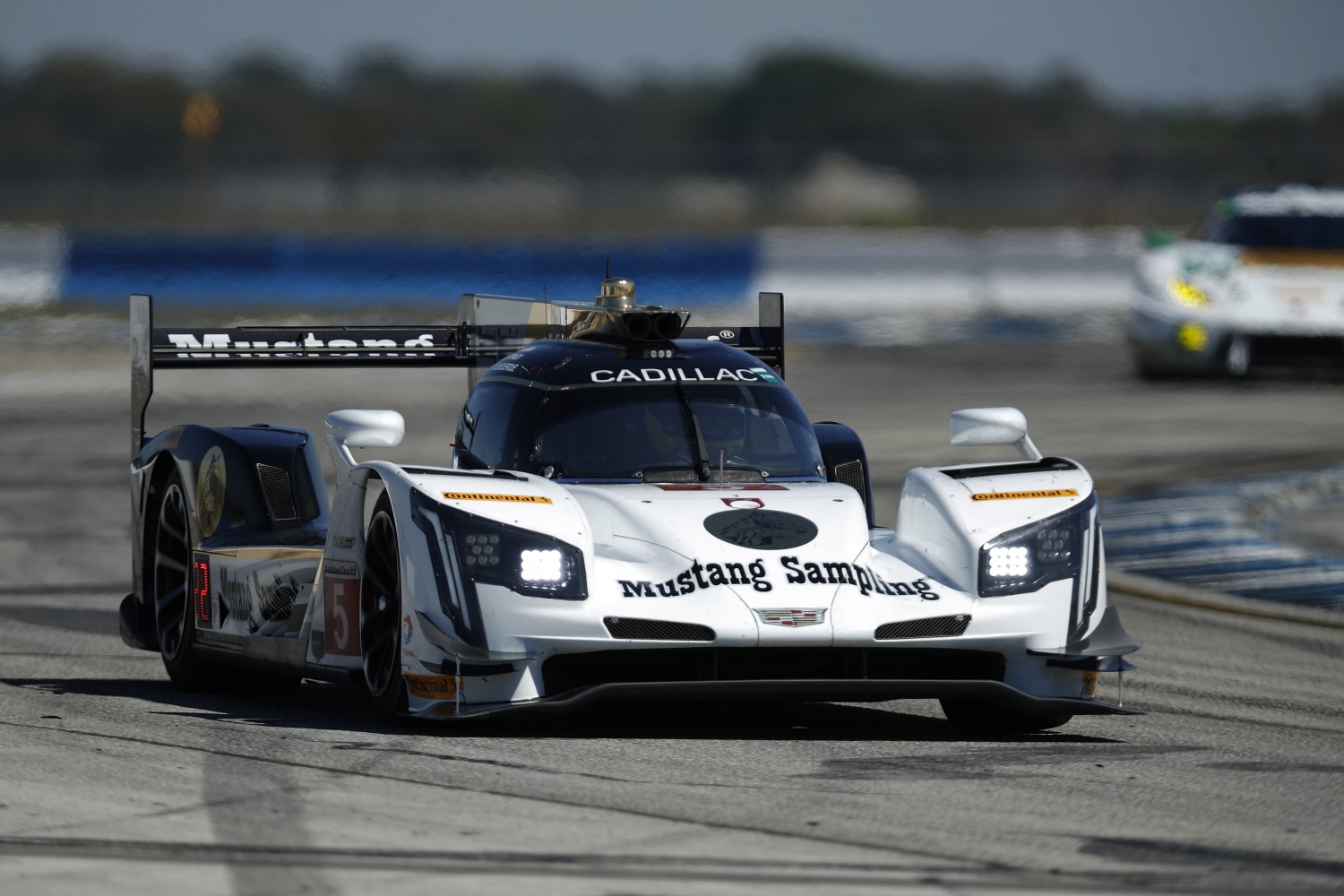 Six hours down, six hours to go in the 65th Annual Mobil 1 Twelve Hours of Sebring Fueled by Fresh From Florida, and we’ve already seen some of the favorites fall by the wayside.

The No. 10 won the 2017 Rolex 24 At Daytona, the first race of the IMSA WeatherTech SportsCar Championship season, and the No. 5 was second, after the two made contact with just a few minutes to go in the race. Third in Prototype is the No. 85 JDC-Miller ORECA LM P2, currently driven by Misha Goikhberg.

In GT Le Mans, the lead has passed back and forth between the Ford GTs, with the No. 67, driven at the halfway point by IndyCar champion Scott Dixon, leading the No. 68 with Stefan Mucke aboard by less than a second.

Leading the four-car Prototype Challenge field in the class’ final race at Sebring is the No. 38 Performance Tech Motorsports Chevrolet-powered ORECA, with Patricio O’Ward behind the wheel. That team also won at Daytona. The race is far from decided, though, as the No. 8 Starworks entry is just 44 seconds back.

In GT Daytona, the No. 11 GRT Grasser Lamborghini Huracan, driven by Richard Antinucci is leading, with the No. 33 Riley Motorsports Mercedes AMG GT3 less than a half-second behind.

The No. 2 Tequila Patron ESM team that won both the 2016 Sebring race and the 2016 Rolex 24 At Daytona is the best example of how quickly fortunes can change. The car has suffered from a variety of problems all weekend, and is presently listed as last in the 46-car field.

It’s also another disastrous race for the pair of Mazda DPi Prototypes – the No. 70, with Joel Miller aboard, went hard into the tire barrier at the end of the longest straightaway when his brakes failed. The car returned to the track, but is listed in 42nd. The No. 55 sister Mazda has had more than its share of problems, and is listed in 37th.

That Mazda crash brought out the first of only three yellow flags. The second caution came when the No. 31 Action Express Whelen Cadillac DPi V.R, which was leading the Prototype class at the time, spun after contact with the No. 22 Tequila Patron ESM car on the front straight, and the Cadillac’s engine wouldn’t restart.

The third caution came about 20 minutes short of the hallway mark when the No. 24 Team RLL BMW M6 GTLM went into the tire barrier, after the brakes failed for driver Nicky Catsburg.

The No. 4 Corvette Racing C7.R that won the GT Le Mans class last year both here and at Daytona was the first official retirement due to cooling problems, and is listed in 45th overall.

The No. 13 Rebellion Racing ORECA LM P2, which qualified on the pole, has had multiple issues beginning with a faulty starter, and is listed in 39th. In 40th is the No. 90 Visit Florida P2 – it finished third at the season-opener in Daytona.

The Mobil 1 Twelve Hours of Sebring is airing live on FOX Sports GO, in addition to television coverage on FS1, continuing uninterrupted through 11 p.m., including post-race interviews. A live international broadcast stream available on IMSA.tv and the IMSA mobile app.