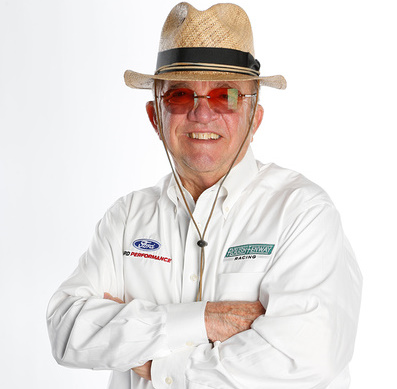 "I have no retirement plans whatever," Roush said. "The article came from an ill-advised stream of consciousness I had at the end of last season."

He then said: "People retire in order to go do things they're passionate about. I already have a job that allows me to be passionate beyond my imagination as a youngster."

"I've been in racing for 60 years, in NASCAR for 30 years," he told SiriusXM. "I've had a great time in the automotive industry working for both Ford and Chrysler. If I couldn't go to the racetrack or couldn't be involved with my teams and helping them with their problems, I don't know what I'd do with my time.

"I don't golf, don't play tennis, I don't have a motorboat. I still have my airplanes, but I don't fly as much as I used to, either."

While he doesn't see himself sitting on a beach for the rest of his life, Roush admits he likely will begin taking a step or two back.

"There's no doubt that I had planned to slow down a little bit," he said. "When NASCAR came out with their fuel injection rules, that put me on the sidelines because up until that time, I had tuned every carburetor before every race, and that put me out of that business.

"But I'm still going to be around, I'm still heavily involved in what we do and intend to continue to participate at the greatest level I can. As long as they let me in the racetracks, don't rescind my license and they let me in the shops, I'll be good to go." NBC Sports

03/17/17 Jack Roush, one of NASCAR's most successful owners and a pioneer in bringing engineering technology into the sport with his multi-car Ford teams, has used the "R" word. Retire.

"I expected to have better years than (winless) 2016 and 2015," Roush said to azcentral sports in advance of Sunday's Camping World 500 at Phoenix International Raceway. "Had I realized I had those years in front of me, I might have decided to side-step, and retire.

"I'm 74. I can't do what I'm doing today for another 10 years. My window is, the longest I've been able to predict what I was going to do in life, has been five years. I'm probably down to a three-year window. I'm looking at how I can be useful."

Two years ago, Roush reorganized his team, investing more in technology and people he thought knew how to use it to go fast. Now?

"We've restructured our management group to be able to operate with greater independence from me," said the graduate-level mathematician who employs 6,000 people at a Michigan engineering company. "And without as much of the inspiration for what we do as, maybe, I've been in the past.

"The race team, with the partnership we've got with John Henry and the Fenway Sports Group, has got plenty of depth. As long as . . . we're able to make a viable business out of it, I'm sure the people that will follow me and will manage the affairs after my passing, they will look favorably on the involvement." Arizona Republic