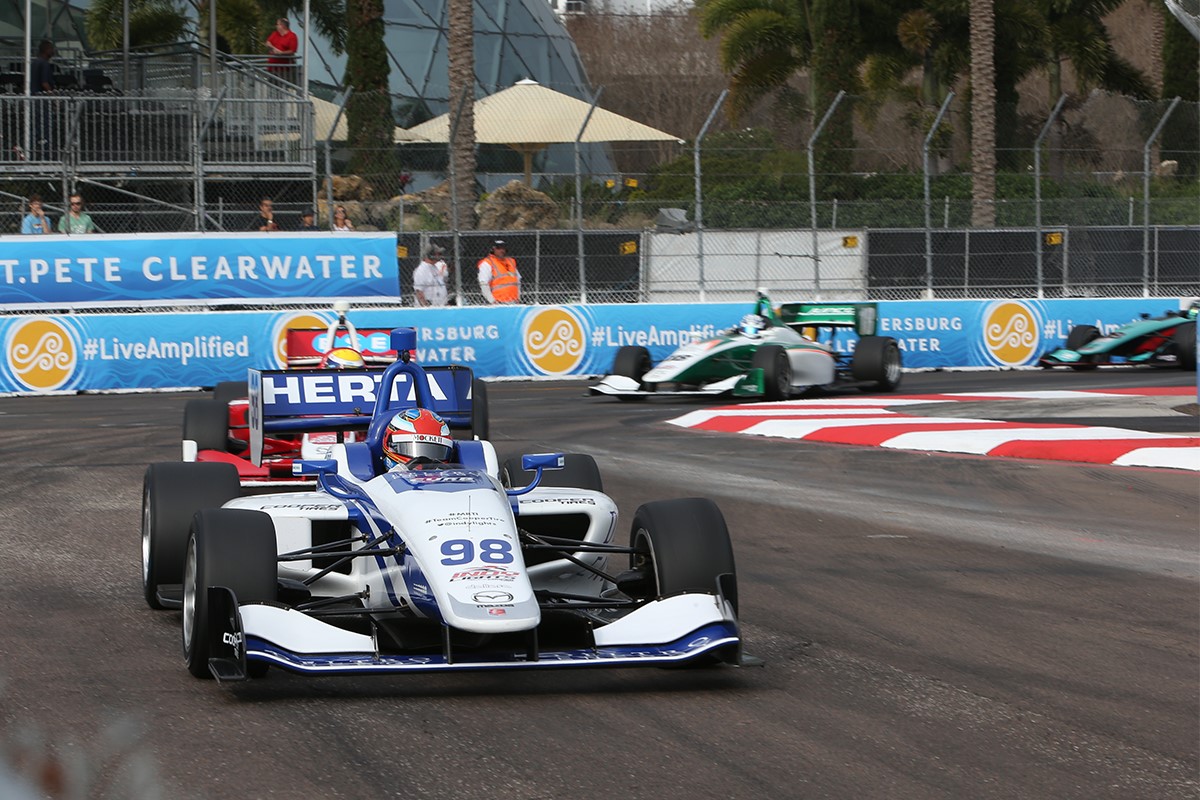 Second-generation racer Colton Herta had lots of challenges to deal with on his way to taking the 2017 Indy Lights series point lead at the St. Pete Grand Prix this past weekend – the challenging Florida street circuit was sight-unseen, he was surrounded with other talented young drivers and he had to manage restarts after caution periods. But one thing the 16-year-old rookie never had to give a thought to was the reliability and performance of the 450-horsepower 2.0-liter turbocharged Mazda MZR-R engine that powered him to second place in the Saturday season-opener and the following day made him the youngest-ever race winner in the series’ 31-year history.

Herta, who raced successfully in Europe during the past two seasons, qualified fifth for Saturday’s race and worked his way to the second step on the podium behind fellow series rookie Aaron Telitz, praised the feature of the Mazda MZR-R that permits drivers to briefly (and for a limited number of times in a race) boost horsepower for overtaking a competitor. “The push-to-pass really helped," Herta said following Saturday’s race.

Herta started from the pole on Sunday and led from flag to flag, though under heavy pressure all the way from 2016 series championship runner-up Santi Urrutia. “I wish it would have been a little easier but it was good to get experience with all those restarts on cold tires."

Colton’s father, Bryan, was the 1993 Indy Lights champion, as well as a multiple race winner during his 13-year Indy car driving career and twice the Indy 500 winner as a team owner.

The AER-designed, manufactured and supported Mazda MZR-R in Herta’s Dallara IL-15 was identical in terms of performance – guaranteed to be within 1.5% plus or minus of every other engine on the 15-car grid – and the same bulletproof reliability and economical operating costs.

“This was a great way to start the season," said Dan Andersen, whose organization operates the Mazda Road to Indy program that includes as its top rung the Indy Lights series. “One of the keys to the success of the series is having engines that are equally matched in performance, completely reliable and economical for our teams. It’s easy for an engine supplier to do two of those three things, but a challenge to meet all three requirements. This is our third season working with AER and I know how hard everyone there has worked over the two seasons to provide Mazda engines that let all of our racers compete on a level playing field."

A new feature for 2017 to the trackside support AER provides for the Indy Lights teams is a dedicated technical trailer where team technicians can meet with AER support staff between on-track sessions to discuss engine calibration and other matters. In previous seasons the AER staff worked out of the Andersen Promotions trailer.

“We are always looking for ways to improve the level of service we provide the Indy Lights teams," said Michael White, North American Programs Manager for AER. “This is one way we can make things more convenient for the teams."

White noted that pre-season Indy Lights testing, held earlier in the month, had confirmed the effectiveness of several process and technical improvements made by AER to the Mazda MZR-R engine over the winter. He also expressed optimism regarding this coming weekend’s Mobil 1 12 Hours of Sebring where the SpeedSource Mazda Prototype team will be starting its second race with the new Mazda RT24-P DPi. “We had zero engine issues on either of the cars over the course of the entire race meeting at Daytona, so we are encouraged for Sebring."

At the International Motor Sports Association’s WeatherTech SportsCar Championship series season-opening Rolex 24 at Daytona last month, the team’s AER-designed and built Mazda MZ-2.0-T engines never missed a beat and the team was in contention for overall victory until a chassis-side oil line failed.