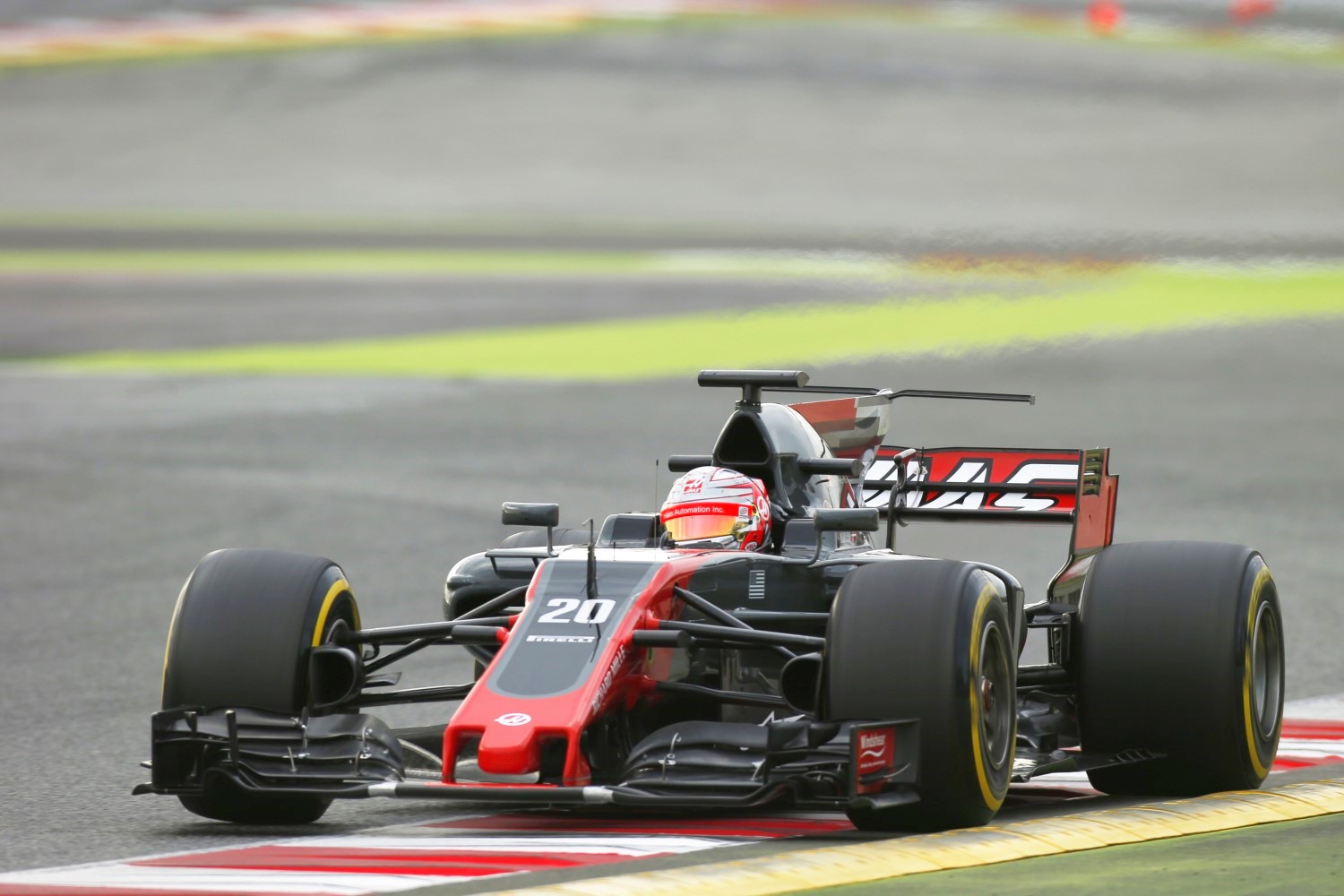 The fins, extending from the rear of the engine cover, "calm the air in front of the rear wing", explained former F1 driver turned pundit Marc Surer.

The so-called 'shark fins' first emerged several years ago but were banned apparently for aesthetic reasons, before being re-allowed for the brand new 2017 regulations.

"Mercedes and some others have even built a second wing in front of the rear wing, but it's terribly ugly and should be banned," Surer told German broadcaster Sky.

(GMM) Mercedes is looking ahead to a "tough year", according to team chairman and F1 legend Niki Lauda.

Lewis Hamilton said in Barcelona last week that although Ferrari appears strong, the Italian team could be "bluffing" and in fact be even faster in 2017.

"But Mercedes have traditionally slowed down in tests and then fly at the races. They are still the ones to beat," he is quoted by Bild newspaper.

Indeed, many others agree that Mercedes is also bluffing, and will emerge in Melbourne with a car capable of winning a fourth consecutive world championship.

"Everyone is saying that if you look at the past, Mercedes will win again," Lauda told the German broadcaster RTL.

"But these are naive people. I think we have a tough year ahead of us," he added.

"At the moment, no one can say who will be in front in Melbourne. But the field is definitely closer together."

(GMM) Adrian Newey could be shaping up to launch a "brilliant update" for its 2017 car.

That is the claim of former F1 driver turned German-language pundit Marc Surer.

The Swiss commentator is referring to the fact that, despite designer Newey's usual brilliance in interpreting new rules, Ferrari and Mercedes were clearly quicker in Barcelona testing.

"It may indicate that Red Bull with its Renault engine are betting on a strategy knowing that they cannot match the power of the Mercedes.

"On the other hand, it could also be that Adrian Newey will present a brilliant update in Melbourne," he added.

Meanwhile, Surer is predicting a tough year for German youngster Pascal Wehrlein, as he moves from the failed backmarker Manor to the traditional midfield team Sauber.

However, it appears Sauber could be bringing up the rear in 2017.

"Pascal is back after his back injury," said Surer. "But Sauber cannot keep up. They are using the Ferrari engine from last year, but Ferrari and all of the other teams have taken steps forward with their new engines."

(GMM) F1 legend Niki Lauda does not think Nico Rosberg will mount a return to formula one.

When new world champion Rosberg shocked the world with his post-title retirement announcement, team chairman Lauda was the most openly critical of the move within the Mercedes camp.

But triple world champion Lauda says he has now over the shock, having initially declared that a new title winner "would never" have quit "in my day".

"I have to say, in my defense, that in my time at least one driver was killed every year, so we had to have a different approach to the sport," Lauda told the Austrian broadcaster ORF.

"In our day, it was really something to become world champion so we always wanted to defend it," he added.

And Lauda also said his criticism of Rosberg was made from the perspective of the Mercedes team.

But Lauda said he was also surprised when the freshly-retired Rosberg appeared in the Barcelona paddock and pits to watch a day of testing action recently.

"I was surprised, to be honest," Lauda said.

"If I wanted to stop, I would stay away for a while to enjoy my child and my wife properly."

Having said that, Lauda doubts Rosberg might already be thinking about a comeback.

Mercedes 'still ahead' for 2017 – Marchionne

(GMM) Ferrari has rejected the "favorite" tag ahead of next weekend's season-opening Australian grand prix.

Although Mercedes has won the past three titles, Lewis Hamilton thinks a "bluffing" Ferrari is the "favorite" based on Barcelona testing.

And team chairman Niki Lauda thinks a "tough year" lies ahead for Mercedes.

Sebastian Vettel, however, insists that Mercedes remains the favorite, and his Ferrari president Sergio Marchionne seems to agree.

"We had two goals for the Barcelona tests," Marchionne said.

"Firstly, to be competitive with Red Bull Racing. And secondly, to have a reliable car. For me, Mercedes is still ahead."

Finally, Marchionne spoke about the hapless former Ferrari rival McLaren-Honda, and he said: "I wish them a good recovery."

As for the 2017 season more generally, Marchionne remarked: "It will be interesting.

"The cars are so much faster and the drivers will really have to earn their money. I think they'll be much sweatier when they get out of their cars."

Vandoorne only has to beat Alonso – Villeneuve

(GMM) Jacques Villeneuve has played down the impact McLaren-Honda's current situation will have on Stoffel Vandoorne.

Belgian Vandoorne, 24, is a highly-rated rookie whose full F1 career is finally beginning in 2017.

But it comes amid a so-called 'crisis' for McLaren, with the team's works Honda power unit still notably under-performing and unreliable.

"It's obviously not great for Stoffel, but I think nothing is lost either," 1997 world champion Villeneuve told the Belgian broadcaster RTBF.

"All he has to do is beat Fernando Alonso. And it's better to be at a team like McLaren than at home fiddling your thumbs," the Canadian added.

"He is a professional driver, he does not have to bring a budget, which is rare today, and he has a driver next to him of great value to compare himself against and earn credibility.

"If he was next to another young driver and he beat him, it would mean nothing," Villeneuve said.

Even McLaren team boss Eric Boullier admits that the current situation is "more difficult" for Alonso than it is for Vandoorne.

"The situation is more difficult for Fernando, because he wants to be competitive — it is what guides him in life," he said.

"Stoffel is beginning his career, while if you like Fernando only wants to have fun, which is to say getting on the podium and racing for the victory."

Indeed, Vandoorne himself insisted he is not down in the dumps about his current situation,.

"We didn't do the laps we wanted to do," he said of winter testing, "but I don't give up.

"Once I'm on the track and doing good laps I can push hard and will try to do my best with the package I have available right now. But for sure we need to take a step forward for Melbourne," Vandoorne added.

Judge Stroll after 'half a year' – Smedley

(GMM) The pressure on Lance Stroll ahead of the 2017 season is "extremely high".

That is not the view of an outspoken pundit but of Rob Smedley, the engineering chief at Williams.

Last week, Toro Rosso boss Franz Tost told Speed Week: "I see Mercedes in front and then Ferrari and Red Bull with a gap to (Felipe) Massa in the Williams.

"We will have to see how the young Lance Stroll will go," he said.

He is referring to the fact that rookie Stroll, who is just 18, had a difficult start to his 2017 campaign with several mistakes in Barcelona testing.

The son of billionaire fashion mogul Lawrence Stroll seemed to struggle with the much faster 2017 car, and seemed about a second off Massa's test pace.

But Smedley thinks Stroll was actually quicker than his best time of 1m20.3 showed, even though that time compared poorly against Massa's 1m19.4 best.

"If Lance had driven in the same conditions as Felipe, he would have done a 1m19.6," Smedley told Auto Motor und Sport. "That would be more than respectable.

"What he needs now is confidence," the British engineer added. "Melbourne will be tough enough for him — new track, limited practice and the walls are closer than in Barcelona.

"The pressure on Lance is extremely high," Smedley continued. "He is only 18, everything is new, the cars are so fast and everyone is looking at him.

"He goes to Melbourne with only 180 minutes of preparation before qualifying. Give him half a year to familiarize," he insisted. "Only then can we form a judgement about him."

Toro Rosso Team Principal Franz Tost expects the squad to be involved in a competitive midfield battle, but is wary that the STR12's key weakness is a lack of reliability.

Toro Rosso completed the fewest laps of any team across the opening test, and while it racked up more mileage during the second test, it finished the eight days with more laps than only McLaren.

Daniil Kvyat stopped on track in Barcelona on Thursday while Carlos Sainz Jr. came to a halt along the pit straight during the closing stages of Friday's running.

Sainz Jr. nonetheless demonstrated the pace of the STR12 as he finished with the seventh quickest time of the 20 participants during the final four days.

"After completing the two pre-season tests here in Barcelona I can affirm that the STR12 is a fast and competitive car," said Tost.

"One weak point is the reliability, as we've had too many issues over these two weeks.

"On the positive side, I can say that this situation has improved compared to last week's test, but there has still been a few problems that have taken track time away from us this week.

"The good news is that we know what the issues are – nothing major – so I'm confident we can solve them all before getting to Australia thanks to all the valuable data we've collected here.

"I'm really looking forward to the season ahead, I think we're going to have a very interesting fight with the midfield teams and I just can't wait to get started!"