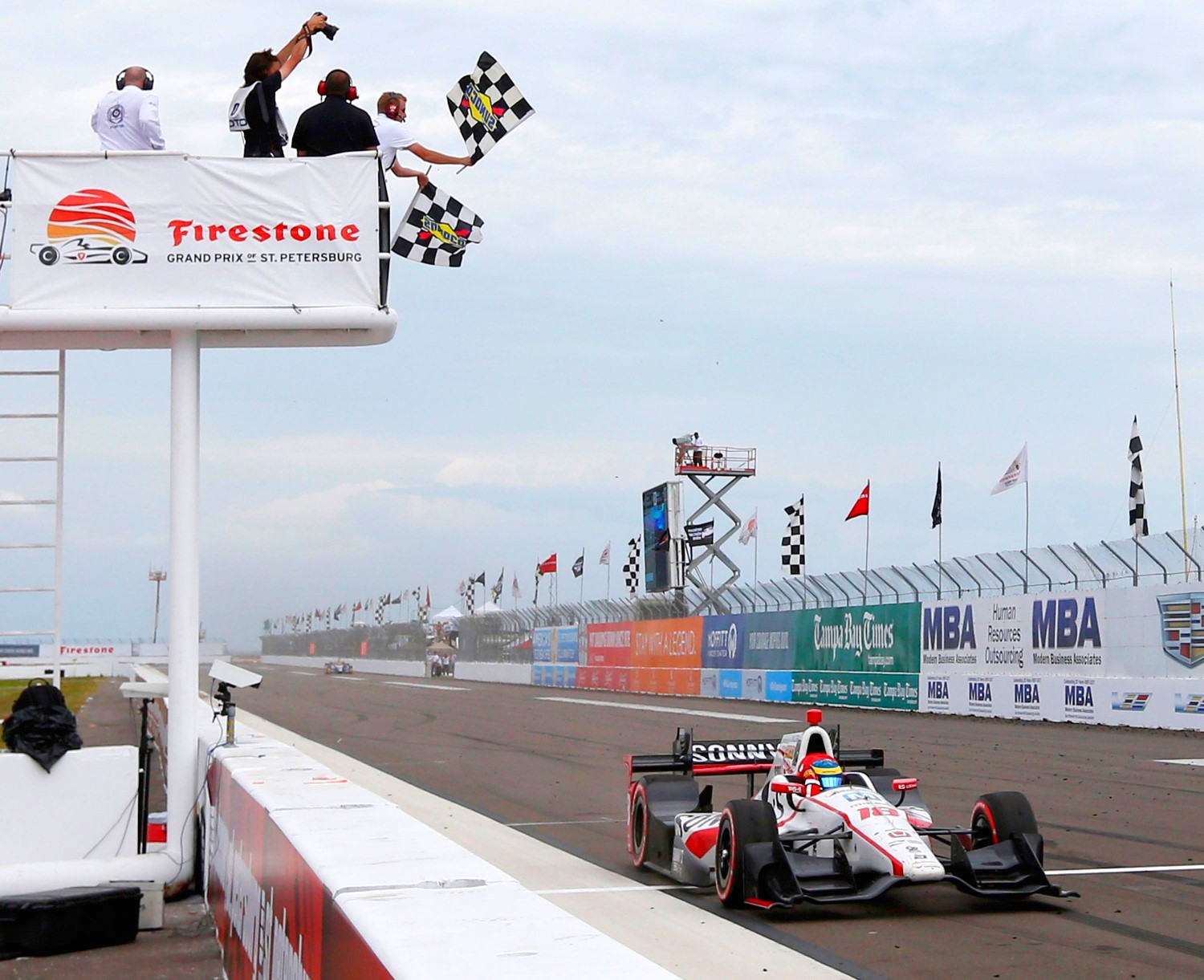 A crash in qualifying on Saturday left Bourdais starting shotgun on the field at the green flag for the 110-lap event, but a series of passes and early caution flags saw him move to 12th after just 10 laps. Another caution on Lap 25 – in the midst of scheduled first-round pit stops – presented him with a huge opportunity, and Bourdais was quick to take advantage, restarting in second and then passing for the lead on Lap 37.

From there, Bourdais was in control, leading 69 of 110 laps enroute to his 36th career IndyCar victory, moving him to sole possession of 6th on the all-time win's list.

In his return to Honda with Chip Ganassi Racing, Scott Dixon started from the outside of the front row and was running second to fellow Honda driver James Hinchcliffe in the opening laps. But both were caught out by not having pitted when the Lap 25 caution came out for debris on the circuit following contact between Tony Kanaan and Mikhail Aleshin. A combination of excellent fuel mileage and passes enabled Dixon to recover to third at the checkers.

Ryan Hunter-Reay was another comeback story on the day as he was forced to pit on the opening lap for a mechanical issue. Fortunately, his Andretti Autosport team was able to make repairs while keeping Hunter-Reay on the lead lap, and he also benefited from pitting prior to the Lap 25 caution.

Hunter-Reay then moved through the field from 10th to pass teammate Takuma Sato for fourth place on the final lap. For his part, Sato led two laps, as Honda drivers led all but 18 laps of the 110-lap event.

Hinchcliffe led 21 laps after starting third for Schmidt Peterson Motorsports and passing for the lead on Lap 6. Having to make his first scheduled stop during the caution dropped him down the order, and he was unable to make significant gains in the second half of the contest. He finished ninth as Honda drivers claimed seven of the top-10 finishing positions today.

Rookie Ed Jones ably backed up his victorious Dale Coyne Racing teammate by rounding out the top 10 in his IndyCar Series debut.

The Verizon IndyCar Series next heads out west, to Southern California, for the Grand Prix of Long Beach, to be televised live on the NBC Sports Network at 4 p.m. EDT Sunday, April 9.

Sebastien Bourdais (#18 Dale Coyne Racing Honda) started 21st, finished 1st for his 36th career IndyCar victory: "This was probably the hardest race to recover. It's really hard to pass. Every time we come here, and it looks like we have a reasonable car. It was looking like a pretty good car and I just threw it away [in qualifying Saturday]. I just really didn't know what to do with myself. To turn that from [the problems of] yesterday into today, I just don't know what to say except 'thank you' to the guys. [It is very emotional] because it's the first one [win since joining Dale Coyne Racing and reuniting with many former teammates]. It's putting the band back together and you don't know if you'll have many more days like that."

Ryan Hunter-Reay (Andretti Autosport Honda) started 12th, finished 4th: "We definitely earned this one. We [pitted to repair] an engine calibration issue early, but stayed on the lead lap. To finish fourth today was just awesome. This DHL Honda team has done a great job all day. To fight back like that, I had to keep coming spot after spot — really earning it, then at the end I got fourth from my teammate [Takuma] Sato. We had a lot of fun out there and it's great to be back into the swing of things. Hopefully, we can get the team back on the podium where we belong, but fourth place is a good start. This whole Andretti Autosport team has done a great job. We had some great pace, showed good promise. I'm looking forward to the next race."

Art St. Cyr (President, Honda Performance Development) on today's race: "What a great way to start the season. I'm extremely pleased with the way all the hard work from everyone at HPD and our partner teams was rewarded today. Not only with the excellent victory from Sebastien Bourdais and his Dale Coyne Racing team, but also with the podium finish for Scott Dixon in Chip Ganassi Racing's return to Honda, as well as Ryan Hunter-Reay's charge back to fourth. Indeed, the entire Andretti Autosport organization demonstrated its capability today with all four entries. Not to forget James Hinchcliffe's command of the opening stint. This was a very encouraging start to the season for Honda. Congratulations to everyone at HPD and our partner teams as we look forward to the rest of 2017."