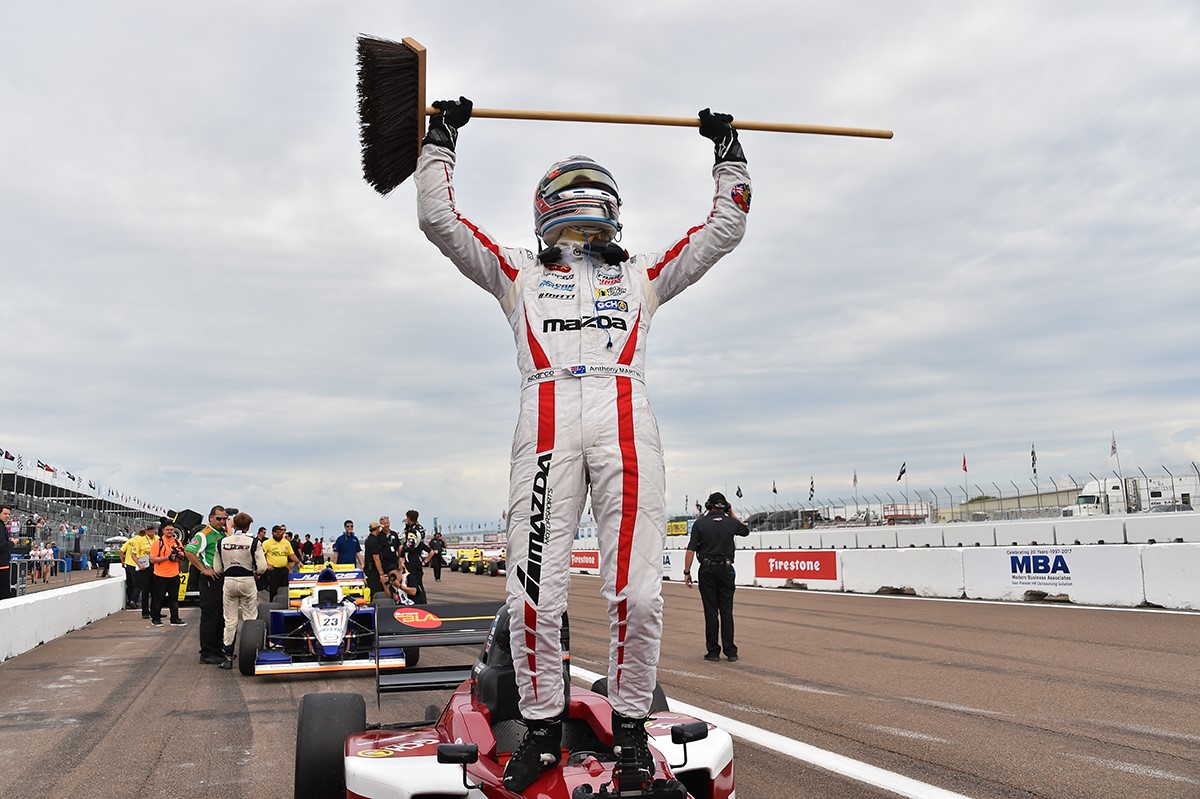 Talented Australian Anthony Martin continued from where he left off yesterday, scoring another flag-to-flag victory in this afternoon’s Allied Building Products Grand Prix of St. Petersburg. He now boasts a perfect two-for-two record in the Pro Mazda Championship Presented by Cooper Tires. Martin, 22, led throughout the 40-minute race to enjoy a weekend sweep for himself and the locally based Cape Motorsports team on the streets of St. Petersburg.

Martin, last year’s champion in the Cooper Tires USF2000 Championship Powered by Mazda, set a conservative pace in the early stages. He remained only narrowly ahead of Franzoni, one of his principal rivals last year in USF2000, the first step on the Mazda Road to Indy Presented by Cooper Tires, with Cunha and Fischer also in close attendance.

All four contenders posted a fastest race lap at one point or another during the opening dozen laps. Fischer eventually lost the leading draft, leaving only one of the distinctive yellow-and-black Team Pelfrey cars to challenge the two leaders, but Cunha proved up to the task as he out-maneuvered his Brazilian countryman Franzoni with an opportunistic pass in Turn One on Lap 17. Sadly, almost exactly one lap later, Cunha’s No. 81 machine coasted to a halt.

Cunha’s pass delayed Franzoni just enough to allow Martin to pull away just a little for the first time. Coincidentally, Martin set what was to stand as the fastest lap of the race (worth an additional championship point) on the same lap to establish a healthy lead of over two seconds.

However, that advantage was negated a few laps later when the yellow flags waved following an incident in Turn Nine involving National Class leader Kevin Davis, who had been running in ninth place overall at the time.

After the cleanup had been completed, Martin took off again into the lead and sped home to win by just over a second from Franzoni. Fischer finished hot on Franzoni’s heels in third, with 15-year-old Sting Ray Robb, from Payette, Idaho, claiming fourth for World Speed Motorsports ahead of Nikita Lastochkin (Team Pelfrey), Max Hanratty (ArmsUp Motorsports), who earned the Quarter Master Hard Charger Award after starting at the back of the field, and Phillippe Denes (World Speed), who had lost a couple of positions with a spin in the closing stages.

The Pro Mazda Championship will return to action at the Indianapolis Motor Speedway Grand Prix circuit on May 12-13.

Anthony Martin (#8 Mazda/Burgess BLA-Cape Motorsports): “I’m so happy to take the sweep at St. Pete and to come away from here with the championship lead. To have Mazda backing and be driving the Soul Red colors seems to have pushed me harder than ever before. With the scholarship, there’s a lot of pressure, but I thrive on pressure and that’s one reason we’ve done so well this weekend. This race was 40 minutes which was much longer than yesterday’s race, so once I was able to get a gap I just drove to a lap time and kept it consistent. Just when I was starting to push harder to widen the gap, the safety car came out. It may have looked easy, but it was hard. As a race car driver, you want to drive hard all the time, so to hold yourself back is very difficult."

Victor Franzoni (#23 Juncos Racing): “This is going to be a good fight this year, between me, Anthony and the Pelfrey guys. It just wasn’t my race today. The car was good and I think I had a better car than Anthony, but I couldn’t put everything together. I’ve raced here for four years and I’ve only gotten one podium before, in USF2000 in the rain. But I survived the race and got some good points. It’s a good start for me and for Juncos Racing. We’re still getting to know each other, so this is still like testing. I’m sad and happy now, but I am confident for the rest of the year."

TJ Fischer (#82 Team Pelfrey): “It’s good momentum for us now. I struggled at St. Pete last year so to have two podiums right off the bat is great for my confidence. It’s hard on the street courses, because you have limited track time so you’re pretty much thrown in and you have to perform. Anthony and Victor have more experience here than I do so it’s still a learning experience. We hung in there and the three of us kept it pretty close. It is a little hollow for me, since my teammate had a mechanical problem, but in the end I’m happy to be on the podium."