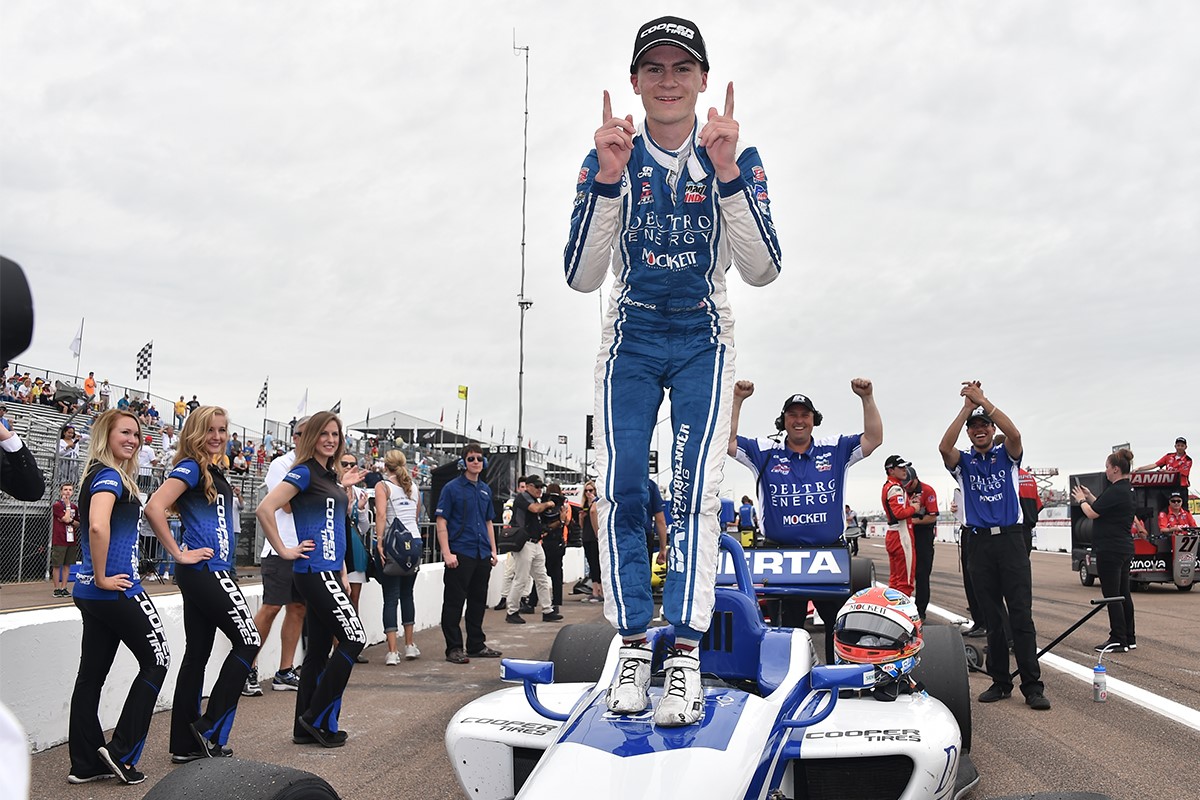 Colton Herta impressed everyone yesterday on his Indy Lights Presented by Cooper Tires debut by charging through from sixth to second. But that was nothing compared to this morning on the Streets of St. Petersburg. The 16-year-old from Valencia, Calif., started from the pole and displayed remarkable poise as he outpaced the field to win the Mazda Grand Prix of St. Petersburg Presented by Cooper Tires in convincing style for Andretti-Steinbrenner Racing.

The son of 1993 Indy Lights champion and two-time Indianapolis 500 car owner Bryan Herta also put his name in the record books as the youngest ever winner in the 31-year history of Indy Lights dating back to 1985.

After qualifying on pole position yesterday morning, Herta maintained his advantage at Turn One, only for the caution flags to wave almost immediately due to an incident in the midfield involving Nico Jamin (Andretti Autosport), winner of the 2015 Cooper Tires USF2000 Championship Powered by Mazda, and one of podium finishers from yesterday, Neil Alberico (Carlin). Both cars sustained substantial damage but neither driver was hurt.

The restart again proved no problem for Herta, who soon began to edge clear of fellow front row qualifier Urrutia. Behind, after restarting fifth, O’Ward made quick work of passing Dalton Kellett (Andretti Autosport) before charging around the outside of Kyle Kaiser (Juncos Racing) at Turn One and finally completing the pass in Turn Two after a brief clash of wheels. Next in O’Ward’s sights was Urrutia, who proved to be a tougher nut to crack. He tried a couple of times, only to be firmly rebuffed.

A couple of mid-race caution periods (due to single-car incidents involving Kellett and, later, Carlin’s Garth Rickards) negated what had been a comfortable advantage of almost three seconds for Herta, but the youngster again proved up to the challenge as he kept his cool – and his lead – before taking the checkered flag 1.7797 seconds clear of Urrutia.

O’Ward battled his way to third after relinquishing the position to Kaiser and then repassing him soon after the final restart. Kaiser had to settle for fourth ahead of yesterday’s winner, Aaron Telitz (Belardi Auto Racing), who battled his way from 10th on the grid to earn the Tilton Hard Charger Award.

After the first two of 16 races which will determine the winner of a Mazda Scholarship valued at $1 million to guarantee the Indy Lights series champion an opportunity to contest at least three Verizon IndyCar Series races in 2018, including the Indianapolis 500, Herta (who also secured today’s Staubli Award) holds a 10-point advantage, 59-49, over Telitz. O’Ward, on 39 points, ensured three rookies atop the point standings following the opening weekend.

This weekend’s racing action will air March 18 on NBCSN. The next two Indy Lights races will take place at Barber Motorsports Park in Leeds, Ala., on April 22-23.

Colton Herta (#98 Deltro Energy Mazda/Andretti-Steinbrenner Racing): “All the yellows we were looking for yesterday happened today. It was a good race and we came away with the win so we’re super happy. My first feeling was relief that the race was over, because that was a hectic one. I was always checking the mirrors on the restarts for Santi and learning how to do the best job on cold tires. It was a tough race, because Santi’s been in this position before – and he’s one of the toughest competitors I’ve come against in this situation. Coming away from this weekend with the championship lead puts me a little bit ahead of schedule."

George Michael Steinbrenner IV, Andretti-Steinbrenner Racing Team President: “It was definitely a good start to the season, leaving the first two races in the points lead, but it’s a tough field this year. As you saw, Urrutia was really quick behind Colton, and Aaron was super-fast yesterday. We’re not booking the championship but it was a good start! Knowing Colton for so long and knowing how good he can be, it was great to see how quickly he got out there."

Santi Urrutia (#5 Belardi Auto Racing): “It was a tough race but a good one. I was trying to get to Colton but I had Pato right behind me. He was my teammate in 2015 in Pro Mazda, so I knew he was going to try to pass me. I tried to get Colton on the restarts but his car was really quick and he defended really well. I didn’t really get a clear chance to get by. Everyone is so quick in the series – both races this weekend were won by rookies. It’s so competitive, so I am happy with second place today and the points toward the championship."

Pato O’Ward (#3 Gap Guard/Topo Chico-Team Pelfrey): “The weekend went really well, in the end. I lost my quick time in the first qualifying session and started from the back, which was not what we were looking for. But my goal was to finish fifth in the first race and get on the podium for the second, and we accomplished that so I’m satisfied. I’m going to go home and work on putting something together for the next race at Barber!"