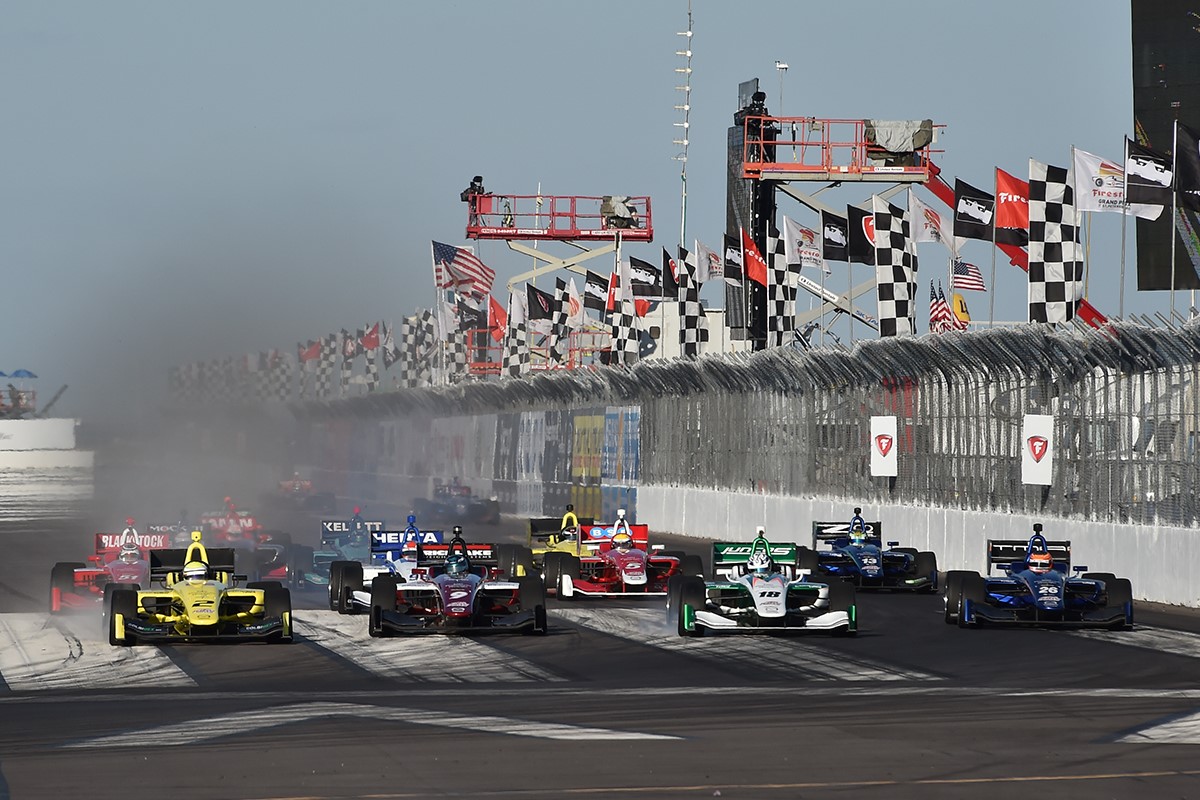 Aaron Telitz tried his utmost to turn the Indy Lights Presented by Cooper Tires season opener into a procession, but fortunately his fellow protagonists failed to follow his script during an otherwise action-packed Mazda Grand Prix of St. Petersburg Presented by Cooper Tires. As Telitz, 25, from Birchwood, Wis., romped to an impressive debut victory from the pole for Belardi Auto Racing, the remainder of the 15-car field staged a thrilling contest which ended with fellow Americans Colton Herta (Andretti-Steinbrenner Racing) and Neil Alberico (Carlin) completing the podium.

The Mazda turbo-powered Dallara IL-15 package has provided some excellent racing action since its introduction two years ago, but the advent in 2017 of a new and innovative “push-to-pass" system, which allows up to 10 seconds of increased turbo boost to deliver an additional 50 horsepower – and, unlike in many series, can only be employed as a tool to assist overtaking, rather than as a defense mechanism – proved its worth with a host of spectacular overtaking maneuvers during the 35-lap race.

There was action almost literally from start to finish. It began just seconds after the green flag when the field narrowly averted disaster at the first corner as Colombian Juan Piedrahita, who had qualified a career-best third for Team Pelfrey, left his braking a tad too late at Turn One while making a move for the lead. Cars were seemingly scattered in all directions as many contenders took evasive action, but thankfully, once the dust had settled, Telitz had managed to maintain his lead. Brazilian rookie Matheus Leist emerged in second, after starting fourth, while Carlin teammate Neil Alberico followed in third after a disappointing qualifying run with a lack of straightline speed left him seventh on the starting grid.

Shelby Blackstock (Belardi Auto Racing), Kyle Kaiser (Juncos Racing) and Herta ran next at the completion of the first lap, followed by the recovering Piedrahita and his teammate Pato O’Ward.

The biggest casualties from the opening contretemps were Santi Urrutia (Belardi), who picked up some damage and required a lengthy pit stop for repairs, and Dalton Kellett (Andretti Autosport), who resumed well in arrears of the remaining runners.

Telitz took full advantage of a fresh set of Cooper tires to pull out more than a second over his pursuers to ensure he was not within range of attack by anyone using their push-to-pass, and indeed a series of quick laps allowed him to extend his lead to move than five seconds inside just eight laps.

The most significant pass for position came on Lap Six when Alberico found a way past Leist for second. It was the first of many. And the young man who really made an impression was Herta, still a few weeks shy of his 17th birthday, who used his push-to-pass to excellent effect on the main straightaway, then displayed fearless form under braking as he gradually made his way toward the front. Telitz was already too far up the road to be under threat by the time Herta executed his final pass – for second on Alberico with only five laps remaining – but it was still a mightily impressive performance.

Alberico was rightly delighted with third after a disappointing 2016 campaign, while Blackstock also enjoyed a strong run to fourth ahead of O’Ward, who scrabbled past Kaiser under braking for Turn One with just a couple of laps remaining.

The field will be back in action tomorrow morning for a second installment. This time, though, Telitz will have a harder time, since he qualified only 10th in this morning’s second session of qualifying. Instead, Herta will start from the pole when the race gets under way at 9:45 a.m.

Live timing and live streaming will be available on indylights.com, as well as on indycar.com and the Road To Indy TV App. The race will air on NBCSN on March 18.

Aaron Telitz (#9 Mazda/Rice Lake Weighing Systems/Belardi Auto Racing): “I was expecting to do well this year but I had no idea coming in that I would be on pole and win the first race of the year, especially with such a deep field. It feels really good to be on the top spot. I had a good jump at the start and survived the pack-up at the start. Once I was out ahead, I just kept on doing consistent lap times through the race and hitting my marks. But honestly, my first feeling at the checkered flag was relief. To be here with Belardi, to be in the Soul Red car and wearing a Mazda driver’s suit, it all just feels a little unreal. When I started in car racing, I had no idea I’d ever be in Indy Lights, let alone win a race in my first go. I can’t thank Mazda enough for creating this ladder system and giving drivers like me a chance."

Colton Herta (#98 Deltro Energy Mazda – Andretti-Steinbrenner Racing): “I knew that I had 15 push-to-pass uses so I was trying to be conservative. I would only use it when I knew I could overtake. It took a few tries to get adjusted and it will take a few more to nail it perfectly but it’s a great feature. I love how you have to be within a second of the other driver, so it eliminates defending. I used it when I tried to get around Neil the first time, but I ran out. The dash doesn’t tell you, so I kept pushing it and didn’t feel anything! I got a good run on the inside and he left me room. It was good, hard racing. Everyone left each other room."

Neil Alberico (#2 Rising Star Racing-Carlin): “I had a tough year last year, battling gremlins and struggling as a rookie coming from Pro Mazda, so it’s great to come back and redeem myself. To get my first Indy Lights podium in the first race of the year is great. The Carlin guys have really worked with me and I appreciate that Carlin and Rising Star Racing had faith in my ability, which allowed me to come back this year. Geoff Fickling is my engineer this year, and he worked with Ed Jones last year and has won numerous championships through the years, and that has worked really well. He’s been a great asset for me."